How do Special items work?
Yesterday, 18:08 by cthscr (7 replies)
in Might and Magic
Well, you can check MM8 yourself
I already did.
And so did I. There was no item in Game.ItemsTxt with...

Looking for a new game to play
Yesterday, 14:25 by Banedon (18 replies)
in Hall of the Heretics
Bump, still looking for new multiplayer game to play. Anyone have suggestions?
I notice Among Us has...

Resources represents one of the most important part for a Might & Magic game. Even Heroes VI had changed some mechanics about them, Heroees VII's team announce a full revamp of the system and introduce seven different resources. The Heroes Community have issued a Q&A with the H7 producers. I thought I'd just give you the quick highlights:
* There will be a zoom function in battle mode.
* The map editor will allow mapmakers to use scripts.
* Primary attributes are in.
* Still secretive about the RMG and Sim Turns.
* Unique warfare units for each faction.
* Magic system close to the ones used in Heroes 3 & 5.

New events and stories improve Heroes VII background, and players can discover the third part of the Tales of the Ten Years War.
The narrator reveals some information about the dawn of Ten years' war, and how the humanity fall into darkness... Some days ago, spies had taken blue prints and artworks about Holy Empire's armies, and they showed us basics units of this army. Today, we can discover more important units and those designs.
With all information, we can tell that they are quite similar between them, and it's created a true unity feeling. Nordic and Roman's medieval inspiration are definitely the base of Holy Empire's design. And you, do you like this news artistic creation ?

After some years on the beta test, Ubisoft and Blue Byte's team launch Might & Magic Heroes Online. All players can discover a new adventure in Ashan's world. Using a web browser, this video game reveals a huge graphic potential.

Because of the newss MMO aspects, we cannot realy compare this game to the others Heroes games, but PvP, cooperation and news fights mechanics are really interesting and allow you to test your strategic skills.

Become a new Hero and fight for your destiny on Heroes Online official website.

During the limited beta earlier this year, Might & Magic Heroes Online introduced a multitude of new features including siege battles, forgotten site quests and the player versus player arena. Listening to player feedback and incorporating community ideas has helped the Blue Byte team make Heroes Online the most accessible game of the series while still offering challenges for both veterans and new players.

Might & Magic Heroes Online is a full-scale adaption of the world famous Might & Magic Heroes franchise into a visually stunning game, combining classic gameplay elements of the Heroes games with online features such as guilds, friends and coop gameplay. Users can pick up their Heroes amongst the Haven or Necropolis factions, recruit fantastic creatures to build up their army and collect magical artefacts to prevail in combat.

Players can join Might & Magic Heroes Online by signing up on the game's official website for free: www.heroes-online.com.

This means that the Phoenixes are out and that the lineup will be as follows:
Core:
Hunter/Master Hunter
Dryad/Oak Dryad
Pixie/Sprite

In other news:
The next faction vote is up. Go here to vote for either Dungeon or Inferno. You have one month to do so.

As usual, Ubisoft is known to have a long history of merchandising and producing goodies for a licence. After having produced Michael's figurine, a vote was conducted to present two posing for a new figuring of Ivan.
So two different posings are available into the vote (the Strategist and the Warrior), and as we speak, players prefer the first one, The Strategist posing (68%).

And you which one do you prefer ? Will you be interested about Heroes VII's goodies ?

See more about this vote on Heroes VII Dev Blog.

For the first time in the Might & Magic history we are giving you the opportunity to express your opinion regarding a Heroes' Collectible. You now have the chance to vote for the Ivan figurine that will be included in the Heroes VII Collector Edition.

Ivan, Duke of Griffin, is the main character of Heroes VII. He wields the sword known as the Griffin's Resolve, a new blade forged by the Bloodsmiths of Hammer Fall and a symbol of Ivan's determination to bring peace to the Holy Empire. When HeroesVII's team started to give nice stories on Might & Magic's background, players welcomed this new feature. They have now published the fourth part of the Ten Years War, and we must admit, it's quite astonishing.
More they give us information about those events, more players can discover political games and diplomatic alliances in Ashan.
With this fourth part, players can easily understand how the situation turn into a nice political mess, and try to anticipate the next episode with some conjectures. H7: Revelations about The Dungeon 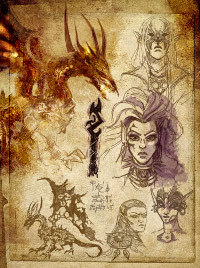 Dungeon, a faction with a special attraction: people are fascinating about them, but fear from knowledge they can find about Dark Elves.
It's quite usual to want more information about this mysterious Might & Magic's faction, and players can be pleased with a news thread about Dungeon, one of two factions nominated to be integrated into the final game.
Find more about Dungeon on Heroes VII Dev Blog.

Well met, my fellow Shadow Councillors. Since I gave you information about the Elves of Irollan and the Dwarves of Grimheim, it feels natural to also share what I know of the mysterious Dark Elves of Ygg-Chall. The providence is indeed with this Council, as I am one of the few lucky surface-dwellers to have visited their capital city of Konos in the past and lived - or, well, you know - to tell about it. I think this was around 660 YSD, give or take a few years. Back then, it was not even an actual kingdom yet - only the burgeoning seed of a future nation.