How do Special items work?
Yesterday, 18:08 by cthscr (7 replies)
in Might and Magic
Well, you can check MM8 yourself
I already did.
And so did I. There was no item in Game.ItemsTxt with...

Looking for a new game to play
Yesterday, 14:25 by Banedon (18 replies)
in Hall of the Heretics
Bump, still looking for new multiplayer game to play. Anyone have suggestions?
I notice Among Us has...

We have had some great influx recently: just the other day, we were sent a whole bunch of big maps made for Heroes III (SoD) - no fewer than eleven maps, actually. Go to this page to find them all.

Also, Yurian just sent me some maps for testing; one small H3 map made in collaboration with HeroOfPunk, and the other is an "impossible" size map for H5 made by Yurian and Markkur. You can find them both at our testing page.

The official Facebook page has an announcement to take note of. This Thursday, Oct. 16th, there is a live chat with the Heroes VII devs on Ubisoft's official Twitch channel. That's this Thursday, 18:00 Central European Time.

Julien Pirou [Lead Designer] and Xavier Penin [Lead Game Designer] will participate in the live chat, presenting the game and answer your questions about the game.

IgroMir has passed and a lot has changed on this website, so it's time for new screenshots from Might & Magic Heroes VII! Haven Magic Hero, Wolf Justicar, Wizard Apprentice and a beautiful heroic statue under the sun of Ashan...

Those screenshots are taken directly from the game with a high level of zoom. Textures and graphics are not final!

In order to celebrate the international launch of Might & Magic Heroes Online, Celestial Heaven's staff is proud to announce you a Giveaway.
The staff has 25 codes for a Starter pack, including the Spider Eater or the Golden Kappa in-game companion. Those codes worth nearly $7 in the game.
All players can ask for a code, you just have to PM Aemaeth to obtain your gain.

Don't worry if you miss this giveaway, CH's staff will organise more contest until the end of the year. We would like to Thank Ubisoft for their contribution to this contest.

For more information about redeeming the code after the reception, see how to do it on MMHO website.

In a 1 hour 20 minute session on Thursday, Xavier Penin and Julien Pirou played the demo map and answered some questions from the fans. Here's our roundup of what they talked about:

That's it for this round, but the guys said they wouldn't mind doing more of these.

Duke Ivan is maybe one the most important character of Heroes VII. This second son of Duke Vassily of Griffin didn't have the perfect young's life, in a perfect world.

Assassination and plot were present soon in his life, and he had to embrace his fate in order to rule on his Duchy.

Discover more information about his life and his personality on Heroes VII Dev Blog.

It is time for you to learn more about Duke Ivan and his inner circle. As they say in the Greyhound Duchy: "Ã  tout seigneur, tout honneur." So let's begin with the one we want to see on the imperial throne, the Lord of Griffin himself. 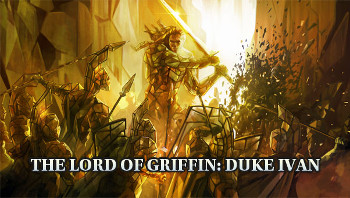 The official blog site has issued a new "meet the team" article - the first in a series of who knows how many instalments. This time, it's Arnaud and Gaëtan - the ComDevs in charge of the content of the website - who are the subjects of study. One thing we can certainly state is that the current communications policy is a big improvement over that of previous Ubisoft ComDevs: there is a single main portal for official news, the Facebook page is but a suppliment and you don't have to pay attention to Twitter and a myriad of other social media in order to stay up to date. Also, communication is fairly regular, and it even goes two ways, as Kimmundi has started to reply to some of the many comments made on the article. One can only hope that they are able to keep up with the flood of incoming questions.

Heroes can discover new details about Murazel, the new Ivan's advisor. She's an archangel, close to Sandalphon and Michael, but she has got a different behaviour. She blames her people for the diparition of The Shantiris, and she's known for her friendliness for humans and other Ashan's races.
Because of past choices, she was unwelcome in both Empire and Angels places. Some mysteries appears after Sandalphon disappear and she will try to order the new Holy Empire.

Today I will tell you more about one of Ivan's advisors. While for reasons of my own I chose not to immediately disclose her identity during the first sessions of this Shadow Council, many among you have correctly guessed the name of the Angel sitting at Ivan's table. She is indeed Murazel, the Guardian Angel of Hammer Fall. Fans of the Heroes series who have played user-made maps have probably seen this kind of thing before; terrain features introduced by the map maker, designed to influence the gameplay. We might be talking about using forests of mountains to make certain parts of the map impassable; I myself have used timed events to remove these obstacles, in order to simulate the opening of a passage as explained in the story: "Your men have worked tirelessly and finally been able to clear the road". That sort of thing. Some of the more gifted map makers have created wonderful effects like this.

The Heroes VII developers have decided to kick this up a notch. This article explains how you can use things to your advantage on the adventure map, potentially making map strategy more important than ever:
"Choke points": Destructible structures such as bridges and teleporters, that are useful in linking towns with the surrounding areas.
"Area of Control:" Almost as in the previous game; controlling a town or a fort also gives a degree of control over the surrounding areas and resources.
"Forts:" A realistic feature, giving control over the surrounding area and strong fortifications against invasion. To successfully invade a territory, a player must take the fort or risk frequent quick-strikes from the army within.
"Outposts:" Forts in remote areas, controlling enclaves or territories far from your town. The caravan feature should be useful here.
"Caravans:" Function as a hero-less army on the adventure map. Can be attacked or interacted with while it moves across the map, making supply lines an important feature. After all, what is the use of reinforcements if they never arrive...?

All this sounds like a very interesting way of going about it; map strategy lies not only in the hands of a skilled map maker, but can also be exploited by a skilled player. The strategy when designing a map and when playing it now becomes more complex than ever.