[H3] How do you enable expansion pack heroes on a map?

[H3] How do you enable expansion pack heroes on a map?

I know I'm not asking for anything impossible, because I have started as Xeron on a map I downloaded. I just can't figure out what that one did different.

It's also worth noting that the heroes I listed as example do show up at the in-game taverns, I've fought several of them.
Top

Try creating a new map and choosing the expansion at the time of creation.

I'm sure I did choose SoD at the start of the creation - it's the default choice, and I knew I wanted some structures not in RoE. I have no interest in placing the heroes on the map, in prison or otherwise. I just wanted the option to be there, if possible.

But I did try making a random map, starting it as SoD, and I noticed something. I enabled all the heroes under map specifications, and when I went to try the map, Castle was the only one playable by human. Sir Mullich and Catherine weren't there, but RoE Lord Haart was! WTF man. I went back and enabled human play on the other teams, and Haart had been replaced by Mullich. No other campaign hero was available either.
Top

I've got it! Tested it on another map too. You can't have all heroes enabled on one map! There's some upper limit. These extra heroes appeared when I disabled some others.
Top

Some info and advice

Hmmm. I don't know what exactly went wrong with your setting up the map's properties, but what I do know is that there are 11 different campaign only heroes available for the Shadow of Death expansion map type. These campaign heroes are automatically disabled, so you will have to enable them in the map editor in order for them to appear in the tavern.

A non campaign hero called Sir Mullich, when disabled, will be replaced by the Restoration of Erathia version of Lord Haart. Note that the "regular" Lord Haart from the Armageddon's Blade is a death knight appearing with the rest of the necropolis cast of heroes and he in turn, according to my intuition, can appear on non-RoE maps simultaneously with his living version if Sir Mullich isn't there. (I haven't tested this, though)

And also, according to the H3 map editor "The minimum number of available heroes on a map is ten for each player plus one for each town."

Yurian, he is right. He wants to be able to select those heros as starting heros, and this can be done only if you disable another regular hero of same class. For example, if you want to start with Roland, you have to enable him then disable Orrin.

If only enabled, expansion heros will eventually be in tavern, but never in starting options.
All my scenarios for Heroes
Top

I did some additional testing on my own while playing a map, and I can confirm Salamandre's findings to be correct. You will indeed have to disable a hero of the same class in order to have a campaign hero serve as a starting hero.
Campaign heroes can be randomly found and recruited from the tavern after the player and the AI have recruited a number of heroes from the general hero pool.

Except Lord Haart which needs more complex manipulation to trigger on map.
He is not available via editor, he is not even in.
All my scenarios for Heroes
Top

Yes he is. Just a little more alive than you'd want him to be

I don't speak about necro Haart, but about the castle one. Show me where he is:) 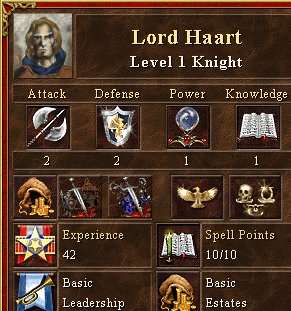 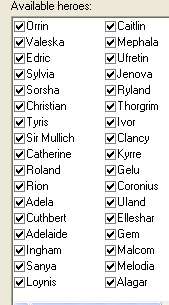 You can get him (in editor) only by placing a random hero and set his faction allowed alignments to castle. If you restart the game without going through main menu, he will be replaced by any random hero, so it is quite weird. But he will be available in tavern in regular game.

And now, the real Haart power (SOD map, not WoG!) 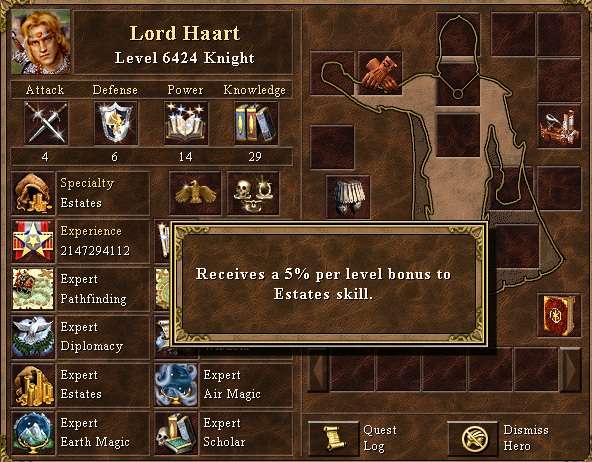 Isn't sweet?
All my scenarios for Heroes
Top

Huh, I thought he was an ordinary hero. I know I saw his picture plenty of times...
Might and Magic playthroughs on my YouTube channel

It is a strange hero. We know that Lord Haart as death knight has a major role in Song for the father campaign, but why we have the same hero name as knight I don't know. Even more, not selectable in editor. The bio says his departure from Enroth was due to ties with a Necromantic cult, is there any connexion with the death knight?
All my scenarios for Heroes
Top

I think it's pretty obvious. Once he joined the dark side, his original alter-ego was removed from the game.
VCMI : the future of Heroes 3!
People just don't care.
Top

Hm, indeed, is he selectable in the RoE editor?
Might and Magic playthroughs on my YouTube channel