The H4 Resource Editor can be downloaded here

You will need to install Java if you want to use this tool, so take a look at the instructions at the bottom of the page (instruction #2 of "How to Setup") here

Unless / Until Namerutan returns, I will be working on a tool similar to the one he put out for testing to help with modding.

What will this tool be used for? It will be for viewing and editing Heroes 4 resource and def files.

In no particular order:

4) Create objects from scratch. (You can change adventure object types at the moment)

6) Enable easy editing of the flag location for flaggable objects and various other fields. (Currently working)

Additional tasks, which may partially complete some of the above:
- Ability to extract any h4d file from an opened h4r file by right clicking the item on the list, and then selecting "extract"
- Option to toggle passability info on/off
- Enable Import/Export of all object types instead of just .h4d (I can add extension filters to enable the user to export as whatever type they want).
- Preserve the last open and save paths.
- Drop down options of editable options, like Animation Speed,
- Make footprint height/width editable
- Make object type editable (Types should also include Nothing and Deadbody) (This has been implemented but needs testing)
- Display the flag, rather than a white dot.
- Set the default open/import to all file types.
- Ability to rename individual layers

Things I need to test / take a closer look at:
- Info at the end of object files. I'm almost positive the info is meant to be used for the game to determine if one object should be displayed above or below another. It seems to be square chunks which cover the object, which also probably enforces a certain size of the object's image.

Can you specify what image info you seek??
Perhaps Baronus have some insight to share... ??
I'm silent in seven languages - and I got all my familys fear.
Everytime you throw dirt, you loose a little ground
Top

No image in particular, but I first started testing parsing adventure objects with the windmill you emailed me. The first image titled base_frame is parsed properly until getting to the pixel, alpha, and acceleration data. At that point, my code is two bytes short from where it should be. I thought maybe the calculation is off by that amount, so I added two bytes to it, but then the next image isn't read correctly once it gets to the same point.

I didn't have time yesterday, but hopefully I will have a little today to share more details. I'll try to get some screen caps of hex editing to point out where I'm looking. Something like the image you send me showing where the image data starts

Didn't end up having any time last night, forgot about my soccer game. I will have time Friday and Saturday so I hope to get some stuff posted then.
Top

As I was typing this out it became apparent that the following procedure to look through hex files to aid me with parsing the image info by hand is not really feasible, but I'll go ahead and post it here anyway. I'll do my best to see about printing the offsets of each of the data below with my resource editor to make it so others can actually take a look and try to help out.


In the image below, the 1a 00 indicates that there are 26 images to follow. Each image starts with its color palette, which starts out with a Short (2 bytes) which indicates the number of colors to follow. This is usually 00 01, which is 256 in decimal. Next is another Short (2 bytes) giving the location of the first non-transparent color index. After that come the colors, 3 bytes each for blue, green, and red values. That will get you to the next screen shot below. 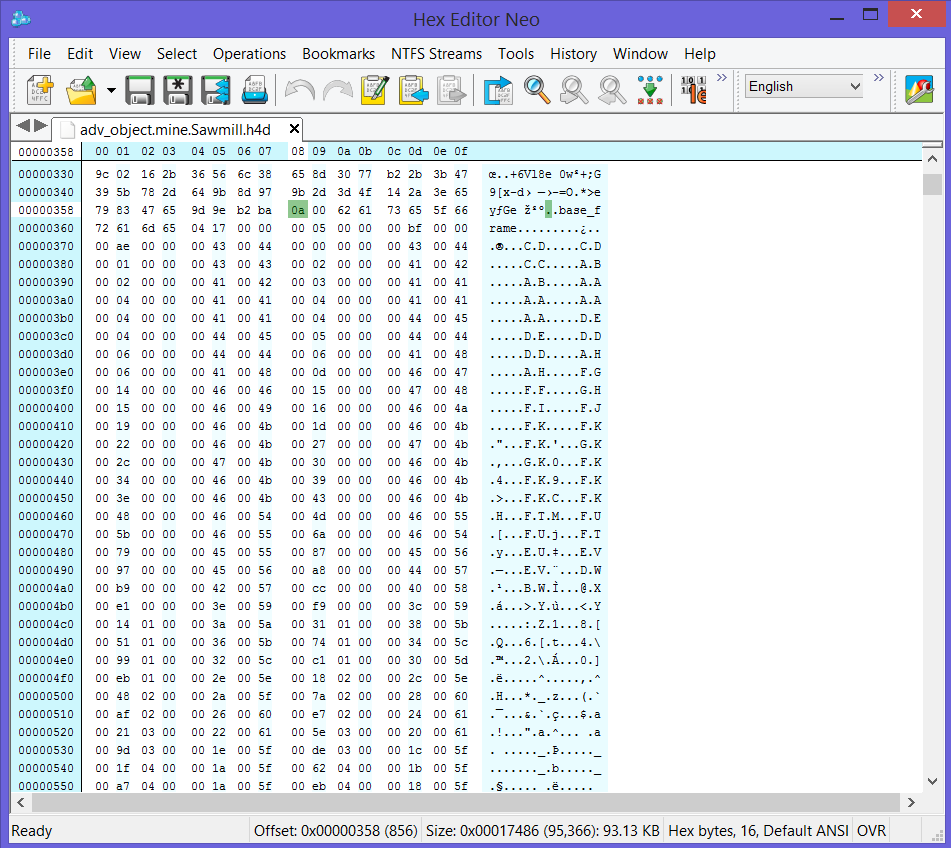 Now we are getting to the data portion. Next are the line offsets, which are 8 bytes each. To figure out how many there are, you need the height of the image, which can be found by taking endY - startY from above. The first 2 bytes indicate the starting x value for the line, and the next 2 bytes indicate the ending x value for the line. The next 4 bytes represent the offset into the data.

Move forward that number of bytes and you are at the pixel data values. As was the case with the line offsets, there will be image height entries, but each entry is variable and depends on the corresponding line offset. For example, lets say the first line offset above had a starting x of 10, and an ending x of 20. Then the first pixel data entry line would be 20 - 10 = 10 bytes long. For the second pixel data line, you look at the second line offset starting and ending x values and so on.

This is integer division, so the result is rounded down.

Still integer division, and the 131 is likely a bug in the game engine, but that's apparently how it is calculated.

Somewhere there is a bad calculation that is putting my program off by 1 to 2 bytes, which means reading the next image will fail.
Last edited by iLiVeInAbOx05 on Feb 18 2018, 17:01, edited 1 time in total.
Top

I've put handling of the image data aside for the moment.

Currently I'm looking at editing the passability and interactivity information. With Namerutan's documentation, I understand how these are parsed from the file, and I am working on creating a visual of the passability info, which will be editable.

After that I will work on being able to view and edit the interactivity data.
Top

Got the footprint centered. Now time to actually apply the passability data to select the correct color to display 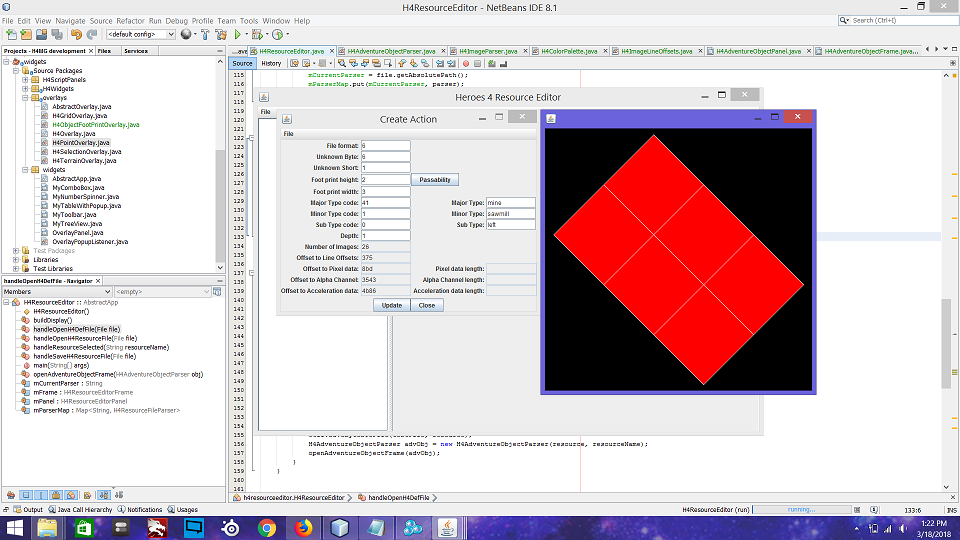 It seems the passability bits are actually read down each column, rather than row. For example, read row 0 column 0, then row 1 column 0, and so on (from top right to bottom left).

After fixing that, here are a couple images of adv-object.mountains.Grass04.h4d 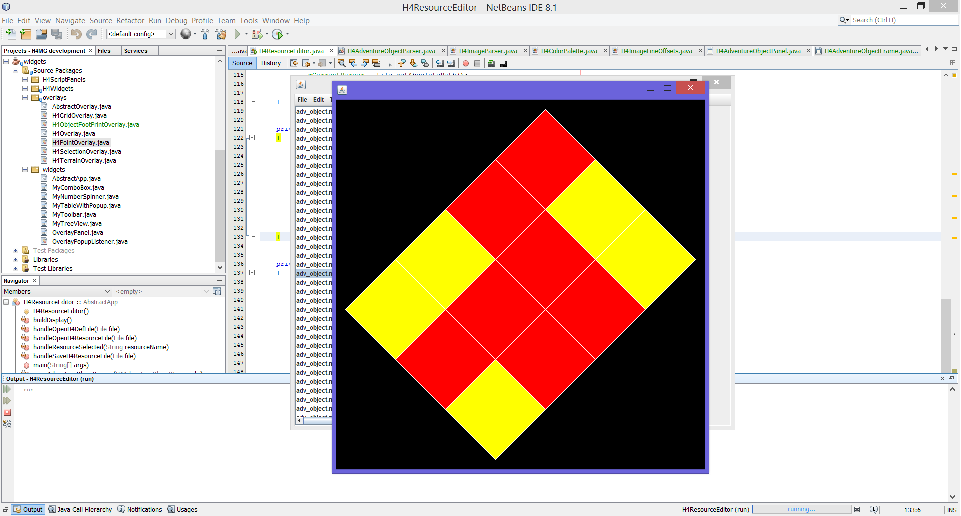 So it looks like I'm correctly parsing the passability data.

Next up, editing the passability data

So I'm currently thinking about what the process should be for editing the passability info.

One way would be to have an "Edit" button to enable editing, then you could just click a grid square to flip its passability (passable to not passable or not passable to passable).

A second way would be to have context menus, so if you right click on a grid square, a drop down menu with options would display with an option like "Change Passability". Selecting the option would flip the passability.

This would remove the necessity of an "Edit" button.

Either way there will need to be an "Update" or "Save" button once you are finished editing. Maybe "Update" would be better since you would still need to save the entire object.

Interactivity would be similar to whatever I go with for passability.

If anyone here is interested, thoughts and suggestions are welcome

The first. You clicked once - square was passable, you clicked second time - the square turned to be impassable.

How many passability options are in your editor?
If many this wouldn't be fitting.

Gotcha. So that would be the first option and I would add an edit button to toggle between being able to edit and not being able to.

I'm also thinking I need a combo box or radio buttons to toggle between passability and interactivity.
Top

The second is more of a graphical issue.

Got editing of passability info working. I went ahead with the first option, minus an "edit" button. Currently no "Update" or "Cancel" button and the passability is updated as the user left clicks on a grid. You still have to remember to actually save the object after any edits.

Now I need to recall how to get one of these "new" objects into a map so that I can have a look in the editor / game to verify the updates!
Top

Here are the results of my testing. I edited the mountain object like so: 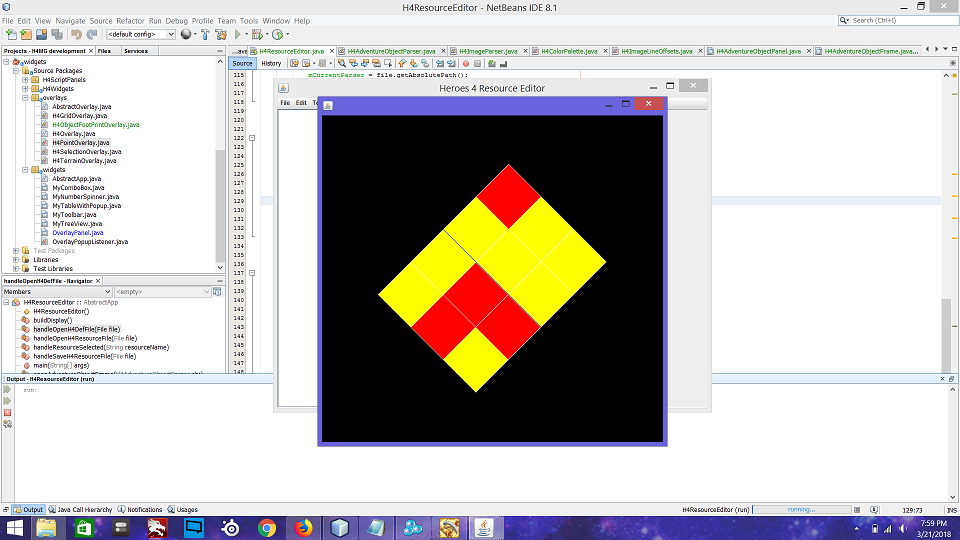 And importing it into the campaign editor and dropping it onto the map yielded the following: 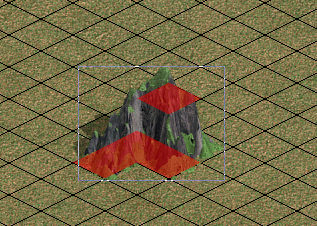 So passability is editable by my tool

I believe I am correctly parsing the interactivity (entrance) info. I'll need to test with a few more objects, including the shipyard Namerutan uses in his example, but I think I'm doing it correctly.

There is a case that I don't quite yet understand how to identify programmatically, so there is a little work to do there before I can actually display it correctly.

I'll edit later when I get home to show what I'm talking about.
Top
Post Reply
71 posts