Fort in intro of Heroes IV is in game! I tested and it works! I've used several of the hidden objects in my campaign

I definitely want to include the hidden objects that make sense in the random generation.
Top

all of these 'hidden' objects are available/shown in the Equilibris mod and fully functional.
I'm silent in seven languages - and I got all my familys fear.
Everytime you throw dirt, you loose a little ground
Top

Update: I got to the point where I can pull out the name and description of a campaign and all it's maps, and add them to the viewing panel similar to the actual editor. Screen caps below:

I just need to figure out how I can tell where the grid actually starts. So far I haven't found anything definitive.
Top

You've found this much already, I'm sure you'll find this piece of information too in not too much time.

it's nice to see you're progressing :-)
I'm silent in seven languages - and I got all my familys fear.

And a little more:
Elevation data immediately follows the terrain data, and the grid is in the same order, from the top right corner to the bottom left.

I still have to figure out what the different values mean / how many bytes each grid receives (if it varies), but at least I know the location of the data now

I also did some work on my campaign. Got a couple dialogues written!
Top

Good news.
There is another nice programm. Picture to Heroes III map converter :-)
You can convert your picture to map:
http://kirinyale.net/treasury.php
Mapmagic. This is too map generator.

Ah, almost forgot about generating a map from a picture

Should be able to add that capability at some point.

For placed events (some of which applies to the other event types), the script stuff comes first (sequence, conditional, display, etc.), followed by the text for the effects tab. After that, there are 7 integers for adding / subtracting resources under the effects tab. Then, there is a byte (which I think may be representing binary bits) for which color player the script applies to, followed by a byte (with three possible values) for whether the script applies to human, AI, or both. Lastly, the text for the name of the script.

And of course, wherever there is text, including the actual scripts, it is preceded by the number of characters in the text followed by a 00.

A lot of the stuff from placed events applies to the other event types as well, but I'll still get them documented when I get home. Eventually, I'll get the first post updated to contain all that info.
Top

I've finished documenting scripting events (Timed, Triggered, Continuous, and Placed), and I know how to read them all in from first Timed Event, to last Placed Event.

After the carryover description, there is a byte for the "Intended for multiplayer" check box (00 for unchecked, 01 for checked). Right after that, is a short (2 bytes) indicating the number of Timed Events to follow, followed by the Timed Events, if there are any. Then, there's a short for the number of Triggered Events to follow, followed by the Triggered Events, if there are any. Same for continuous events, and same for placed events.

There are just a few more things I need to get figured out from the header before the events, and then I'll be able to read in all the events

After the events is a block for what should be the rest of the map properties (such as skills and spells maybe?). After that, are the terrain and elevation blocks.
Top

This is very good reading. Regarding scripts, I guess the next step is figuring out how to copy/paste scripts.
I'm silent in seven languages - and I got all my familys fear.

Copying and pasting will be a simple task

each map will have it's scripts parsed out already, so I'll just need to add each script to its list by type to whichever map the user chooses, then I just use the list size of each list (timed, triggered, etc.) when writing to file

Update: So I've gotten to the point where I can parse out the entire header of each map in a campaign or single scenario map, and I'm currently working on reading in the events.

I thought it was going to be pretty simple to just separate the script body, effects, name, and other properties, but there don't appear to be any definitive delimiters around these properties. So, I'm having to come up with an algorithm to parse out the script body while taking into account the fact that it also needs to be put back together

I could just pull out the entire event without doing any parsing (each event has the same starting hexcode), but then I won't be able to get to things like the event name, so I guess I'm going to have to figure out that algorithm

Hopefully the next update will include some screen shots of the script tab showing all map events - Timed, Triggered, Continuous, and Placed - in tables by event type and then name.
Top

You can also add HIV style interface and background. 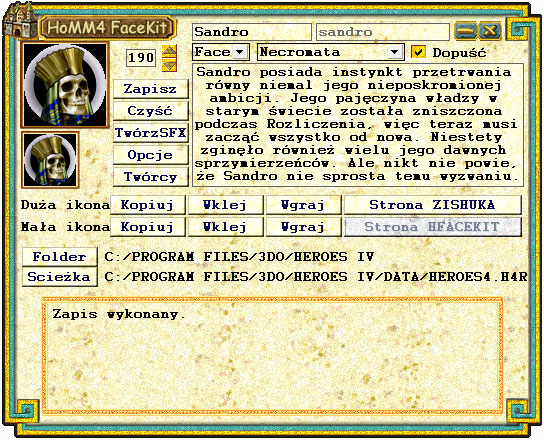 I think I solved the script parsing issue I was having last night. Just have one more issue to figure out / fix and then I'll be reading in Timed Events. The others should fall in place pretty soon after

Next update!! I've read in all map scripts and inserted them into the tables on the script panel as shown below. I tested with a few different maps and campaigns which helped me fix parsing of almost all of the scripts (for map events), but there are probably some I missed that need special parsing.

Selecting a new tab, campaign or map, will load the events for that map.

Next, I should probably test generating a new map with everything I've done to parse the map out into nice data structures, since there are probably some bugs in there. After that, I'll work on my first modifications: copying scripts between maps.
Top

How advanced is the scripts reading? Can you read/display what the script does in the RMG or does it simply display the name of the event?
I'm silent in seven languages - and I got all my familys fear.

The script reading is actually pretty advanced. I had to go advanced, which is what took me so long here, in order to be able to get to the name of the script because there are no delimiters. You have to actually count the scripts in the event. You start out assuming there will be one main script. If it's a sequence, then you get the short (2 bytes) right after it which tells you how many commands follow, so add that to the number to process and continue to read in scripts.

I created lots of script reading classes which keep the pertinent information of each of the scripts. One of the exceptions is the conditional script. I have all the logic checks as part of the conditional, but the two forks are not.

To answer your question, I can definitely set something up to view the scripting in an event once I come to it

Edited for spelling mistakes from typing on my phone