Norwegian members, are you guys ok...

Norwegian members, are you guys ok...

Man, you guys are the last place anyone would think would get attacked...
http://www.bbc.co.uk/news/world-europe-14254705
Disclaimer: May contain sarcasm!
I have never faked a sarcasm in my entire life. - ???
"With ABC deleting dynamite gags from cartoons, do you find that your children are using explosives less frequently?" — Mark LoPresti

I am ok, I live north in country. However, I am still in shock, the news reports on tv... I am greatly saddened. What I think is worst however is the guy in dressed as police who shot youth at the summer camp.

This just makes me sad, how anyone could ever think they were accomplishing anything by doing such a thing.
Top

My heart is with my Norwegian friends.
Top

These were shocking events indeed; cruel and what was the purpose?
Top

Police arrested one, he placed the bomb and immediately traveled to the youth camp where there are now 84 confirmed dead youths by his gun. It seems like the bomb was just a decoy to give him more time to kill at the youth camp. It was a summer camp for youth memebers of the Norwegian Labour Party.

The man is norwegian, identifies himself as a nationalist. He is a conservative christian. To me it's just so disturbing because he looks so typically norwegian.

Many survivors from the summer camp claim there was a second gunman. A second man was arrested carrying a knife where our Prime Minister is about to have attend to visit the survivors. Still no news on this man, but other survivors say he was at the summer camp, but there was nothing suspicious about him. I think it's too early to conclude anything, however he was smiling as police arrested him.

Shocking news, indeed! And what a senseless crime to innocent young people!

I, too, feel with all Norwegians in their sadness!

This is just truly sick. R.I.P people, and much strength to the people close to the victims...
You can either agree with me, or be wrong...
Top

Ethric and I are both OK; we were in Denmark at the time. I don't really want to think too much about this - I just get really sad and angry ...
In War: Resolution, In Defeat: Defiance, In Victory: Magnanimity, In Peace: Goodwill.
Top

First thing i did was check the absence thread, coz i remembered something about you leaving the country...
Disclaimer: May contain sarcasm!

Good to see you 2 are okay. Still sad though. One sick act, the man did...
You can either agree with me, or be wrong...
Top

To strike down a child is the most despicable thing a man can do. My condolences to the families.
Jesus saves, Allah forgives, Cthulhu thinks you'd make a nice sandwich.
Top

Here in Brazil people seem taken aback, because we usually don't listen too much news from Norway, except for something good and exemplar. I'm sad for this country now. It seems that always some lunatic appears to make himself noticed by doing disgrace rather than something for the better, paying the lives of young people for his aims.

I don't know if this guy deserves death (quick), but when a man comes down to this, it's hard to pinpoint a way to judge and punish him. The only way to really strike and punish this worm seems to be by forgetting all about him, and making him know that what he did had no result and that he'll rot in prison in utter oblivion.

It's very sad that whatever befalls this guy, nothing they do will bring all those people back. When I think of these people, I wonder how I would deal if my children were amongst the dead. I want to have kids and I dread these happenings more than I can tell, although in Brazil this sort of terrorism is not common.
"There’s nothing to fear but fear itself and maybe some mild to moderate jellification of bones." Cave Johnson, Portal 2.

My condolences to the families and friends of all the victims.
"I saw the angel in the marble and carved until I set him free..." - Michelangelo
Top

My thoughts are with our Norwegian friends of the CH, and of course with all the Norwegian people, especially those who lost their loved ones in the blood bath. I don't know what more I can say... It burdens the mind and pains the heart. I'm at loss to speak my mind.

Many in my country are very concerned this kind of thing can actually happened in one such Norway.

Considering our historic relation, we believe full in Norwegian people's strength to eventually recover from such.
Top

I'm ok too, was with Kalah on a roadtrip.

Number of people shot and killed scaled back to 68, seems they counted hastily. 8 killed by the bomb, 96 wounded in all, and at least one person still missing.

The perpetrator seems like Hitlers poster boy, a tall blond and insane psychopat who hate foreigners, freedom and democracy, with a very warped view on reality and delusions of grandeur. If not for his heinous crimes he would be a sad figure. Claims to be part of a network, and I understand police and security agencies here and in other european countries are and will be looking into it. Seeing how much one man can do, even the boasts of a madman must be looked into seriously.

I can't forget the young girl who calmly told how he shot 10 of her friends beside her, whereupon she leapt ashore and swam away... she and many others will be traumatized for life, even thugh physically unhurt.
Who the hell locks these things?
- Duke
Top

The Norwegian people, though shaken and shocked, are responding to the tragedy with fierce loyalty and determination. 200.000 people took to the streets of the capital with flowers in their hands in a vast demonstration which was followed by several other powerful gestures throughout the nation. Reports were coming in that the flower shops of the capital were actually sold out of roses. After it became clear that it was some kind of neo-nazi behind it all, people shouted "traitor" and "murderer" as he was transported off to jail.

The crown prince summed up people's feelings pretty well with one section from his speech:

"The Norway we want, noone will take from us."
Last edited by Anonymous on Jul 27 2011, 22:13, edited 1 time in total.
In War: Resolution, In Defeat: Defiance, In Victory: Magnanimity, In Peace: Goodwill.
Top 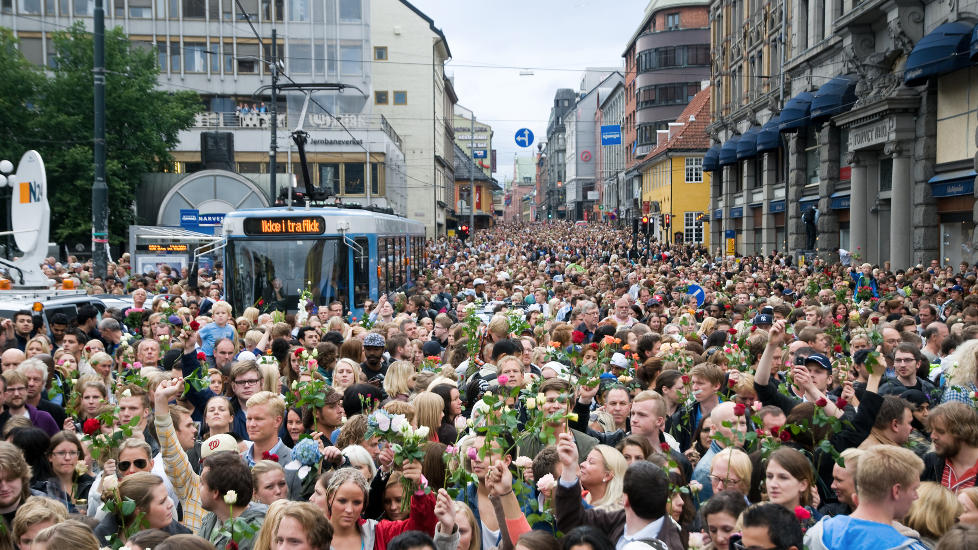