THE EMPIRE OF THE WORLD IV

A Heroes of Might and Magic III Wake of Gods map.

My name is Commodus, Caesar of Roman Empire, Commander of the Thousand Legions, loyal son of the untrustworthy and heartless Marcus Aurelius. The Spaniard stole my throne and dignity, thus all paths led to this: Maximus must die and will do so by my hand. Please Mars, give me strength!

Special Win: [Build Grail in Rome]
Special Loss: [NONE]
Special Other: [a lot]

Special thanks:
(in alphabetical order)

The story takes place after the last event from TEW III. After a last battle in Arena, the former Rome emperor Commodus is thrown in jail, and waiting for his execution. 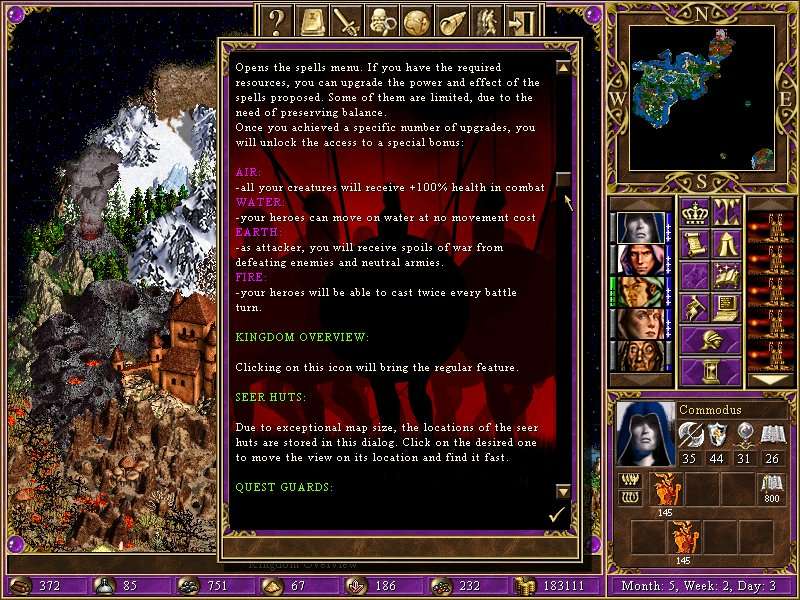 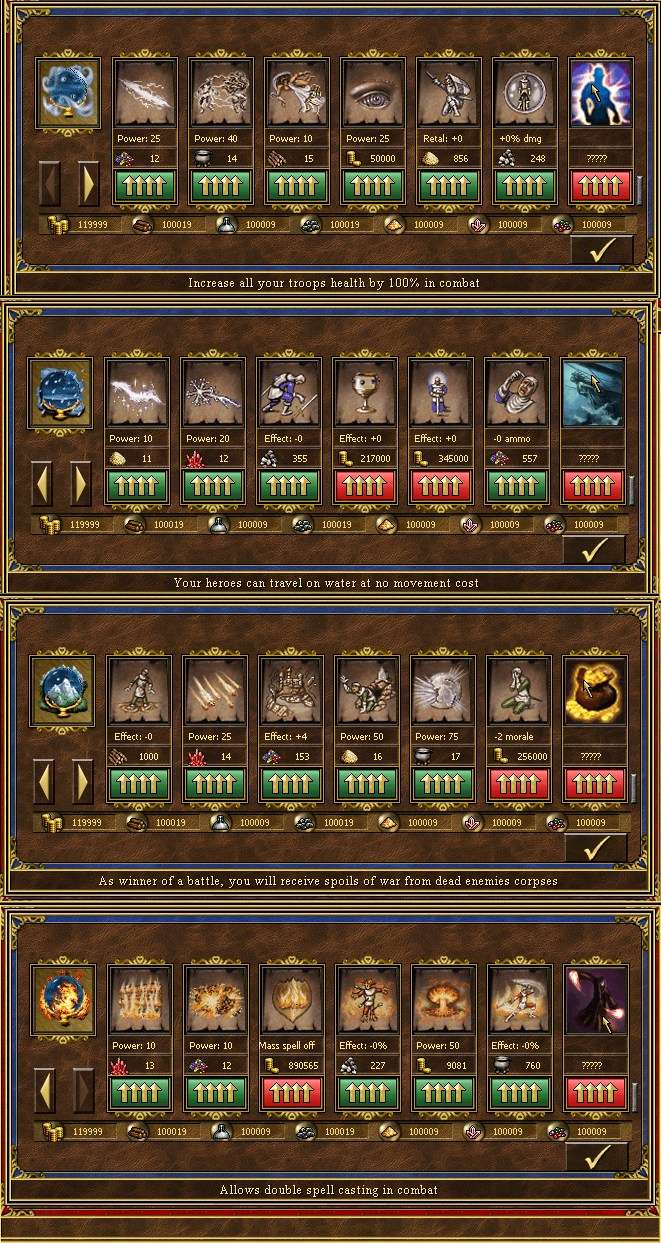 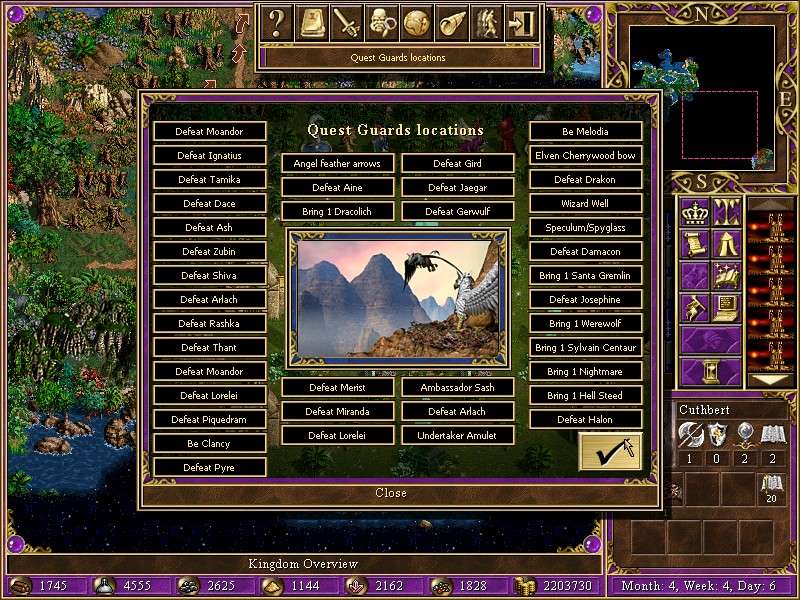 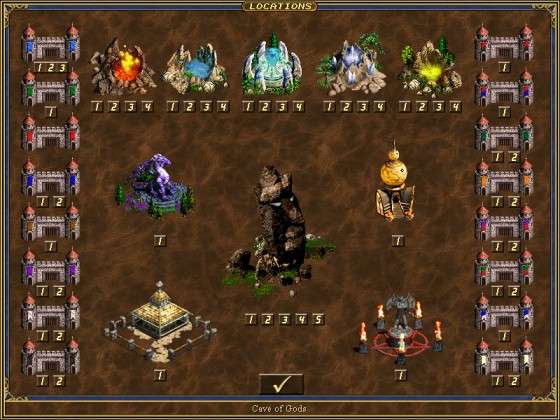 Army stats management, note that there are fixed caps for each creature 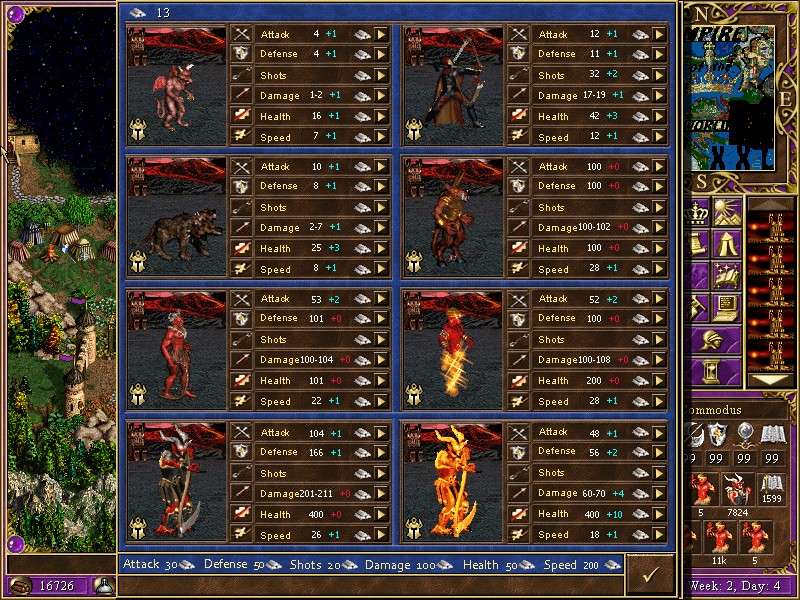 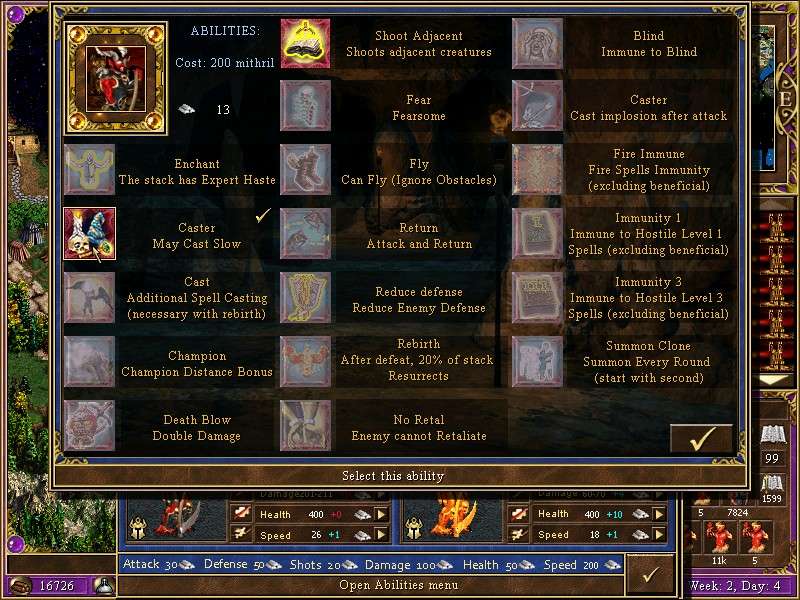 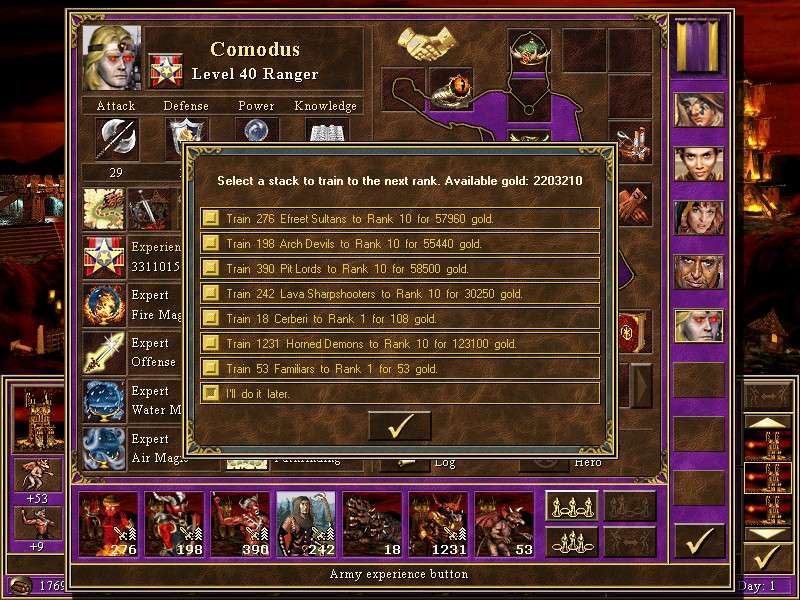 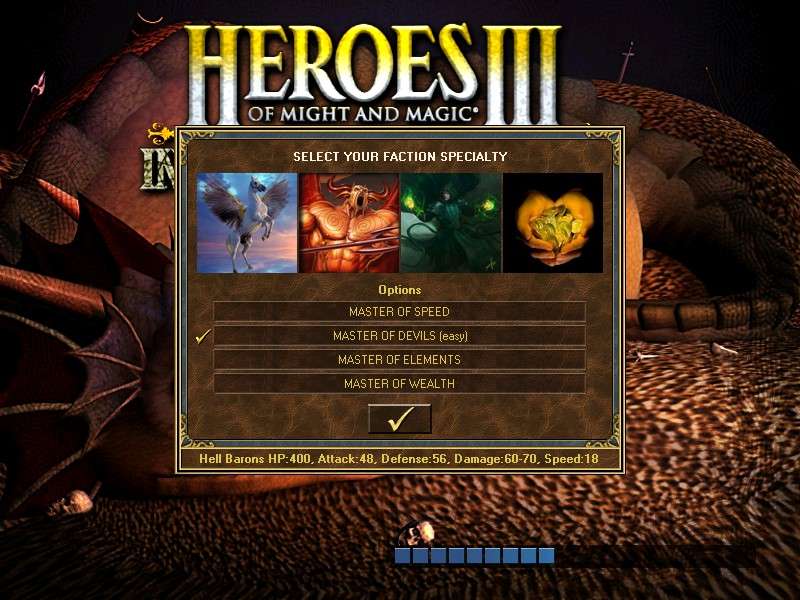 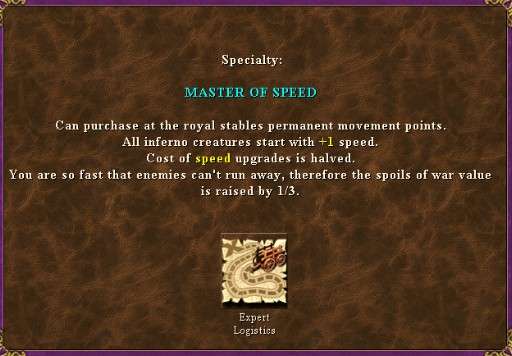 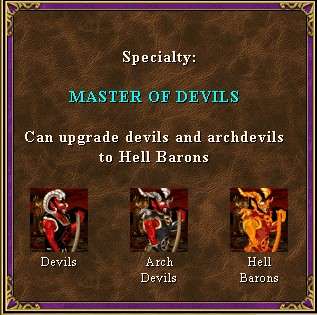 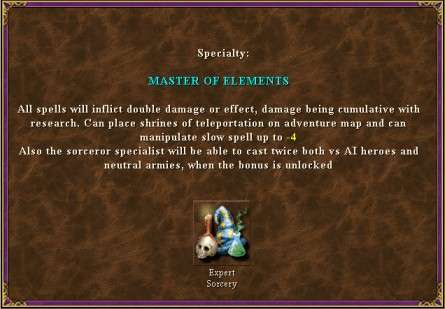 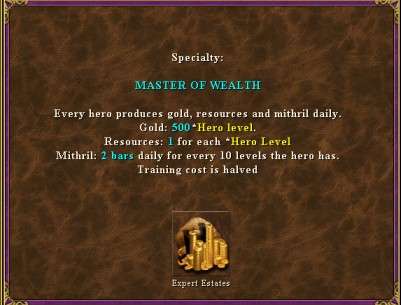 Each faction will experience a different game style, with its own locations and bonuses. The main resource is the mithril, which will be used for all purposes, from converting towns to your faction, boost creature stats and purchase new abilities. Mithril is gathered from mithril mines, also you can join the alchemists and leave up to 10 heroes, each one will generate daily 1 bar for each 10 levels he has. The Masters of Wealth will automatically generate 2 bars for each 10 levels. By defeating the creature banks, you will receive mithril as reward, 1 for each month spent, this amount will exponentially grow until month 12, then decrease by one every month. You can also sell various artefacts at a special artificer, the mithril price will be regardless the artefact level.

For a price which will double with each upgrade, you can boost spells, some will experience a fixed cap, as Hypnotize, Resurrect, Frenzy while others as Armageddon can be improved endlessly, if you provide the funds. AI will use those spells at their normal strength still. Curse and weakness are now level 5, fire shield has potential mass version. Not available: blind and force field. There are four bonuses to unlock, one for each magic school. The prerequisites are naturally based on the number of upgrades already done.

Bonus AIR: +100% HP in battle
Bonus EARTH: Spoils of war after battle
Bonus WATER: Travel at no movement cost on water
Bonus FIRE: Double cast in battle vs AI Heroes. The Masters of Elements can double cast vs neutrals as well.

Spells can also be improved at no cost by visiting their specific magic node on the map, once a month. The cosmos nodes will upgrade all magic schools on visit. 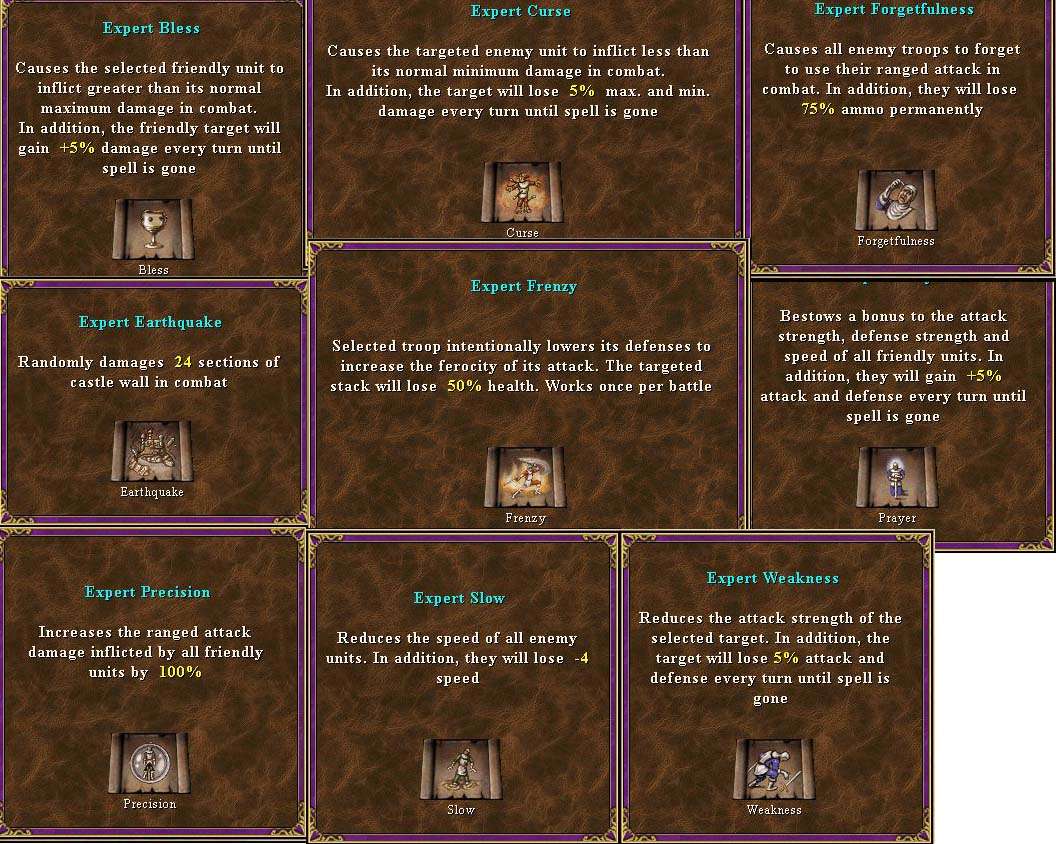 Every week, all AI creatures will be granted with a random hatred ability vs one of your creatures. It will be reseted every week, to make sure all battles are winnable. AI creatures receive a monthly bonus in all stats, longer the game, stronger they are (first year = +10%, second year = +20%). A few invaders will come annoy you at specific moments, every of them is a specialist in same destructive area (Tazar, Hack, Solmyr, Xeron and a few others). To set an internal time limit, AI creatures stats will start to grow after 22th month by 50% every 28 days.


All creatures banks will re-spawn every 14 days, and if already visited, guards and reward +1/3.

In order to keep balance proper, you start with 3 possible inferno towns, and each additional conquered city can be converted to your faction, by hiring and paying the locals. The price will double with each conversion. 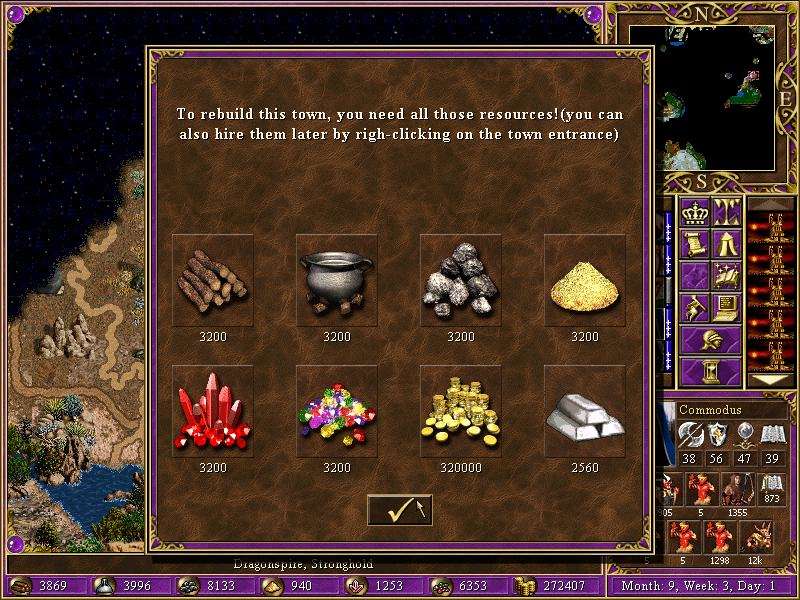 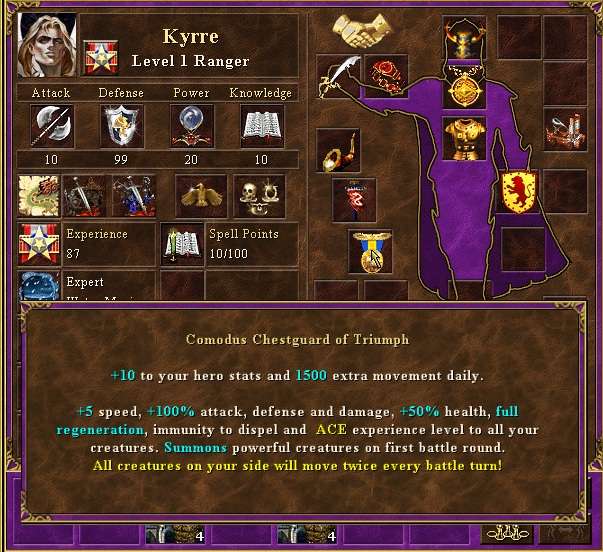 A few screens from game: 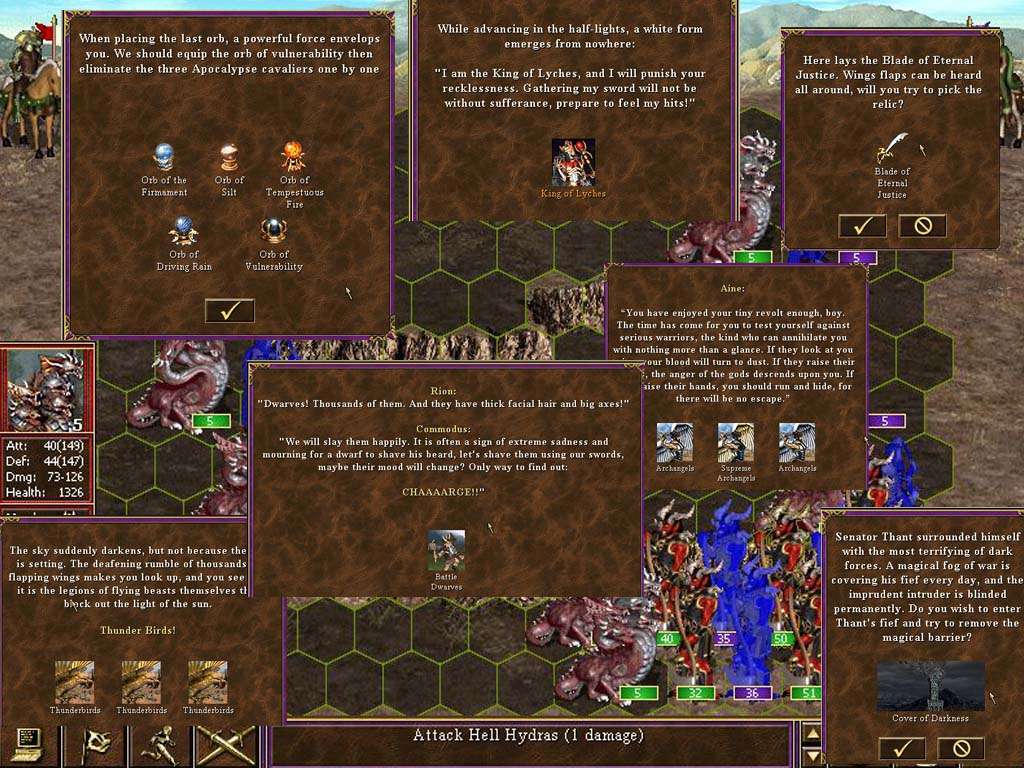 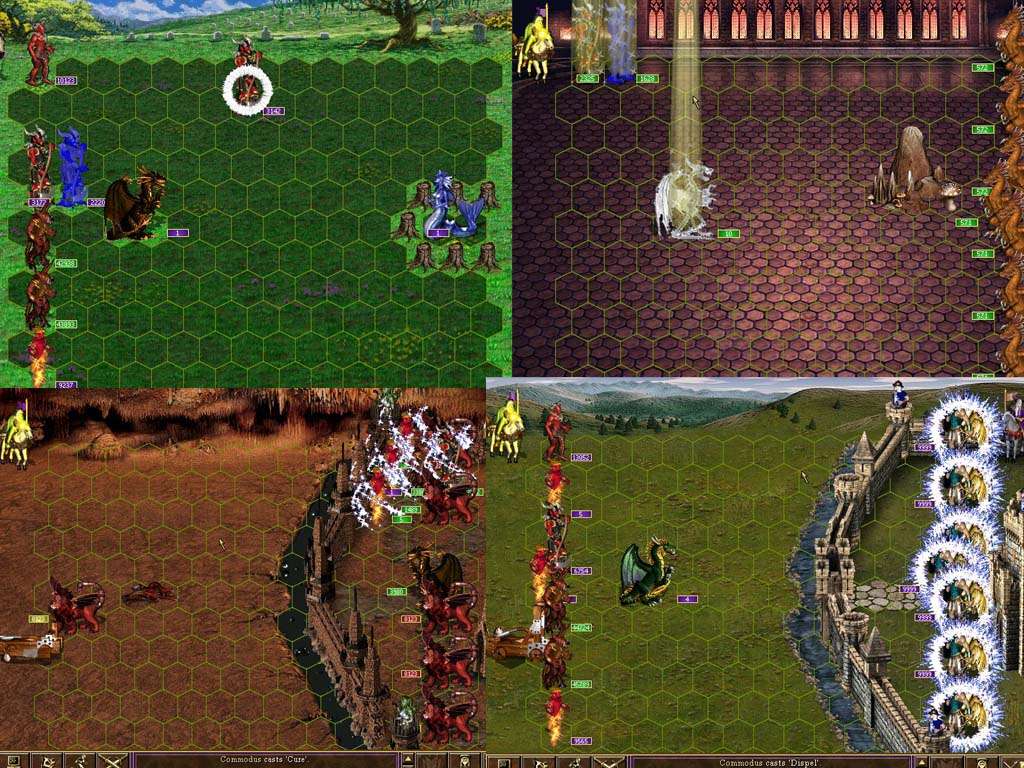 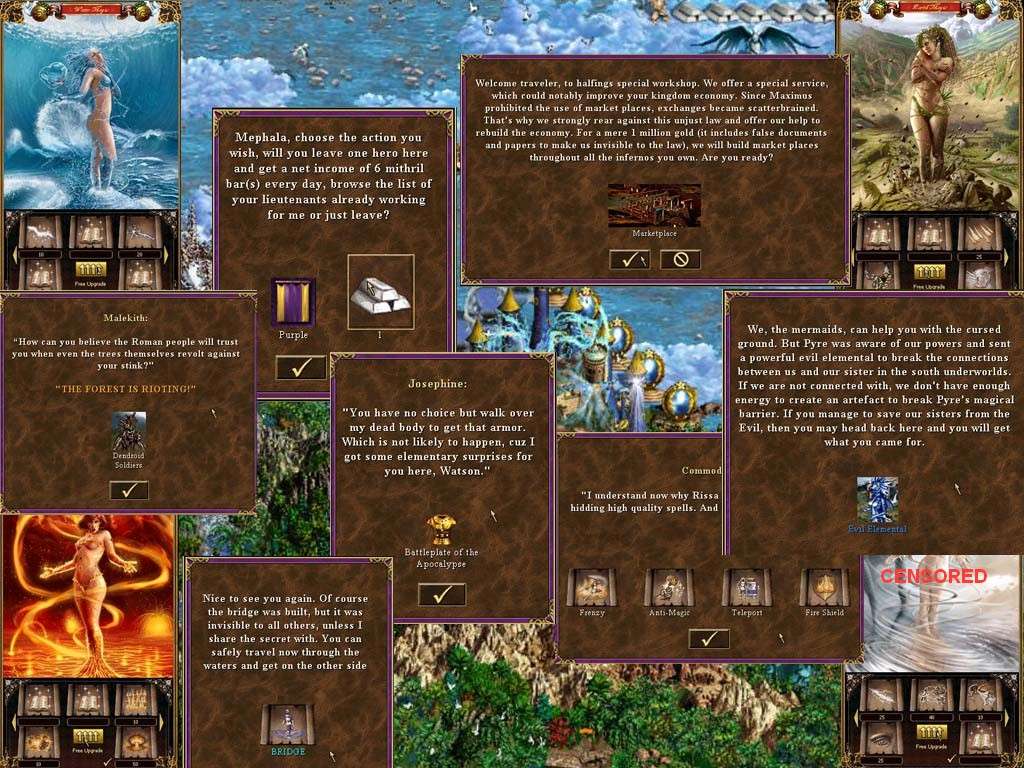 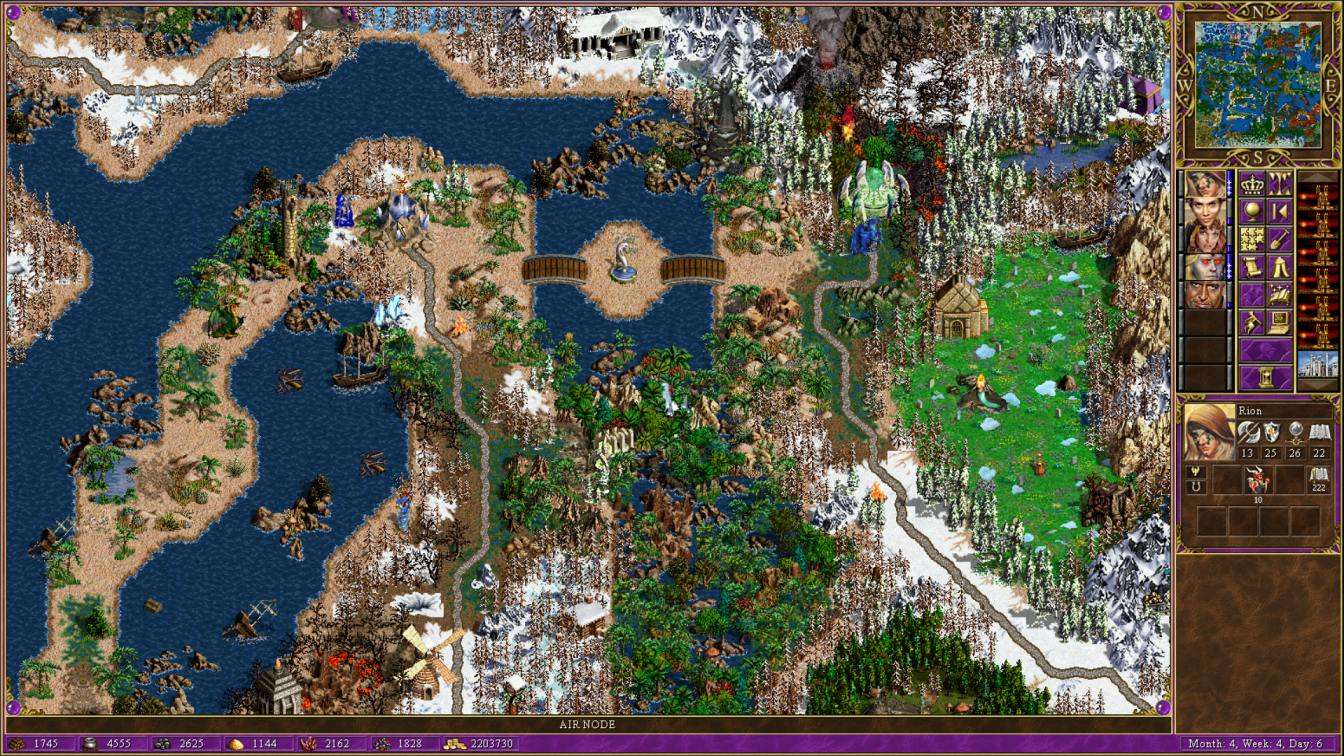 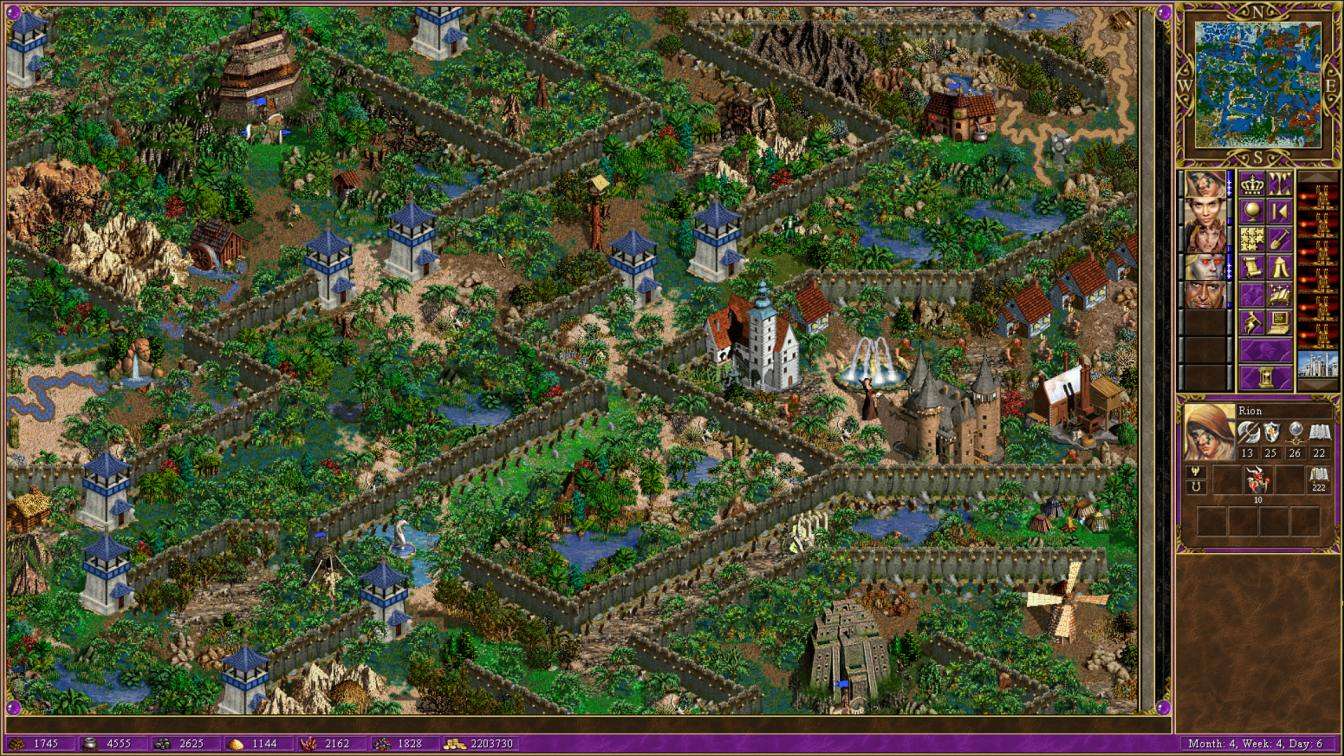 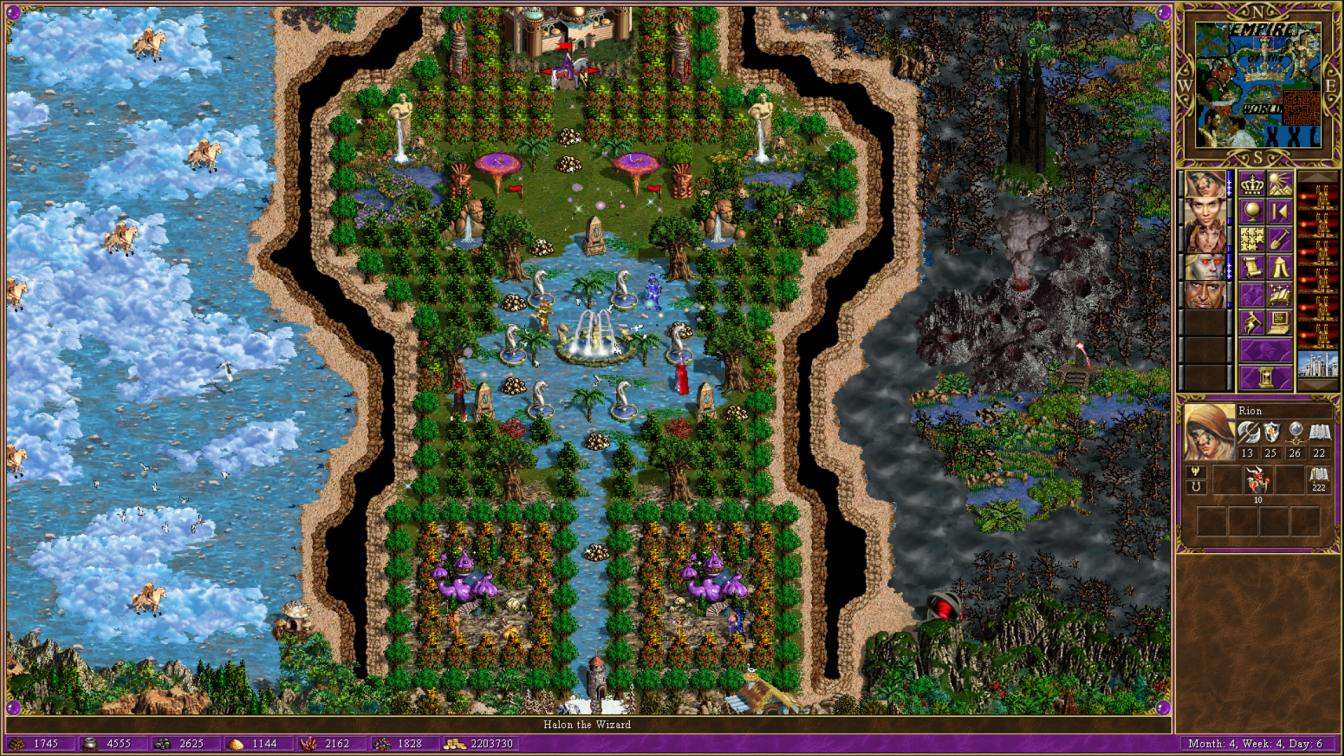 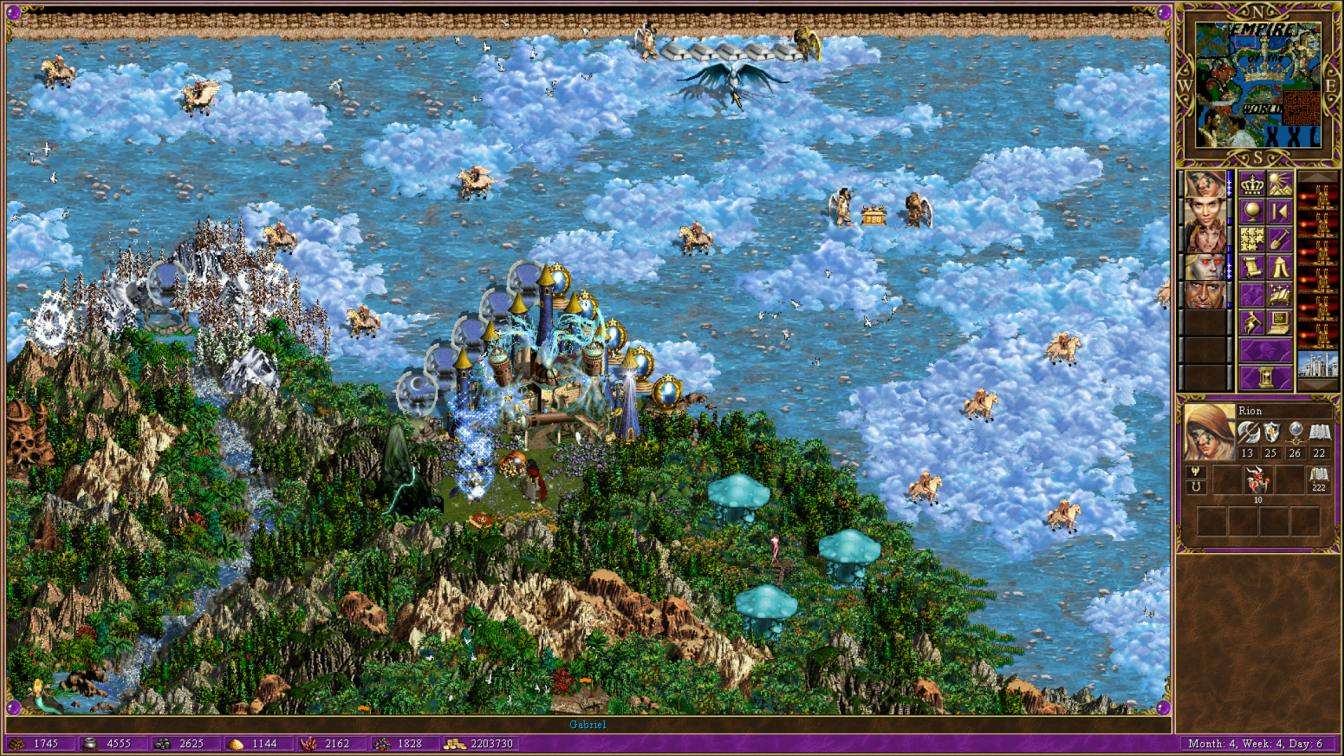 I only can say: Congratulations to your ingenuity, Valery! My deep respect to your never ending "master pieces!" Sorry, that I've missed the boat some time ago.

The News, albeit short, is on.

When I see this kind of beautiful work, it just makes me sick that they've made H6 non-moddable

H3 is even less moddable than H6. WoG is fan created. VCMI will probably open some new possibilities, but certainly not making easy modding. You will still need to learn scripting language, I see no much difference with WoG.
All my scenarios for Heroes
Top

Once again, a Salamandre product leaves me with mouth open wide (and flies, mosquitoes, etc rushing in).

Regrettably, I cannot play this map. I know my standard. And I know Salamandre's standard...

My regret is that we don't have people of Salamandre's caliber working for Ubihole.
Top

A great map. I might have encountered an error. I can't drop a creature on the island with the red keymaster tent, just artifacts. But then you can't reach the town.
Top

Of course you can, but you must split creatures to have only 1 in a slot. Then you can leave it. If >1 in slot, you can't leave. WoG mechanics.
All my scenarios for Heroes
Top

The creature-drop was disabled in the wogify menu by default. I didn't check, my mistake.
Top

Doesn't matter, the map does not read scripts from DATA/s but custom. Any changes in wog menu does not affect the map. It is just that if you have only one stack on hero, the program can't propose you to leave it, because heroes can't be without army. Therefore you have to split first creatures.
All my scenarios for Heroes
Top

Wow. Man, not only do you create the most amazing products (can't call them just "maps", as they are so much more than that), but you sure also know how to sell them. Those screenshots are so beautiful I could cry. Makes me wanna wish I could take a sabbatical just to have the time to enjoy this beauty!

'Only two things are infinite, the universe and human stupidity, and I'm not sure about the former' - Albert Einstein

You have more important things to do, friend. Get that VCMI out so I/we don't waste time anymore on writing thousand of codes to fix bugs. Looking with interest towards the release!
All my scenarios for Heroes
Top

This is most likely the best HoMM map i´ve ever seen and played. Thank you very much for that, Salamandre.
Unfortunately i seem to be stuck about 1/3-1/4 into the map. I´ve just found purple keymasters tent and removed the borderguard blocking the way to the eastern sea.
But from there i see no way forward. And i also don´t understand what i´m to do with the boots of speed the seer gave Rion, since i already have like 7 copies.
Any help or hint is much appreciated.
Top

I don't know where you are, maybe upload a save? There are thousand of paths, normally after purple tent you should be able to defeat rashka south, then proceed further.

There are 8 boots and gloves in game. One for each hero you can hire. Secondary heroes are capital on such size.
All my scenarios for Heroes
Top

How do i upload a save to this forum?
Top

No way. Upload somewhere else and link here.

While playing this map, when i double click on my devils, i get this: and when i click the button, i get this: Any idea why? I installed era that i download from the link on a fresh copy of homm3, so I dont think its a save file problem

Edit: Oh yeah, the error keeps looping around, and i cant get back to the game; I have to forcibly close it
Top

Map and ERA were updated several times, I forgot to update links in this forum. Done now.


Map is for ERA, not WoG 3.58. Seems you installed on it, I don't see additional buttons in your screen. ERA should be installed on clean Heroes complete or SoD.
All my scenarios for Heroes
Top

I think the links in the OP are still not updated, but nvm, I managed to get it working.

For those curious, I visited the site in Salamandre's signature, and got some help there (basically grabbing and installing other versions of era and the map).

Return to “Wake of Gods”