Got this one, certainly the highest which I ever seen.

Though I have once 20% and the final doubled, which was cool too. 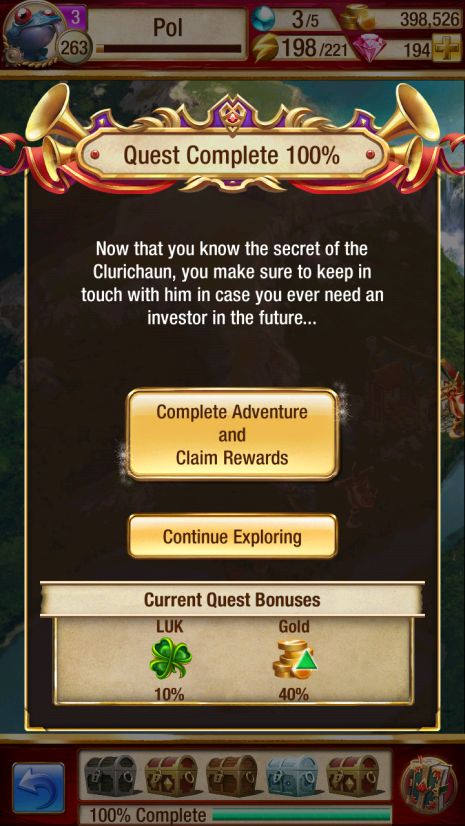 Nice! Seems like it came at just the right time as well

Yes and no. I'm trying to uncover some border areas in my kingdom and these are pricey, each of them cost at least 1 mil. It's kinda boring. If there would be still possibility to buy gold bonus from the shop it would be faster.

Finally I got leveled up my shrines, so with "boost" I'm "competitive" in DC again. I can combine Ifrit and Megalodon (Ifreet +60% Attack and Megalodon's Torpedo is based on Attack) but it's still not enough. I have also Blue Dragon, his stunning ability could be generally more useful. Anyway with boosting my shrines the bonuses were almost +600 to primary skills, without it's less, max a little over +400.

Nice to be competitive again. That Ifrit/Megalodon combo sounds awesome! Add a stun and you should also be able to pass the fallen angel's silence part easily.
A first-to-die hunchback kinda destroys the idea

How often did you try? What cleanse unit are you using?

Myself, I'm foregoing any thought of competition until I level up my kingdom. And shrines come second to last in my current priority
Are you suggesting coconuts migrate?
Top

Sirene, which goes after Hunchback. Both these units are pretty weak.

I have some possible combos for the future, these are:

Or to get Druid or Space Papa.

Okey, the last four areas to uncover cost 2-2,5mil, that's quite a lot. Also upgrade to Castle lvl 20 require 2000 tokens. (With castle lvl 20 you can uncover all areas.) Have them already (tokens) but reorienting on upgrading treasuries, to create a cash cow. Then I will return to these remaining. 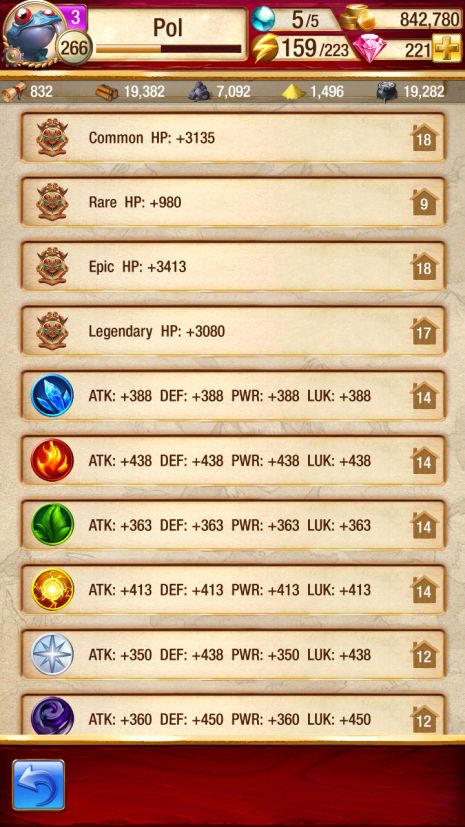 Each five levels the boost is bigger, now I imagine, that other long time players have shrines lvl 20, whereas I will be going for lvl 15 after castle 20 (requirement). Shrines totally overshadow totems, which cost more now and can do less.

The last 10 levels of castle will be certainly omnious (& unnecessary torture.)

So now, I'm using only "Lady of the Lake" for catching Epic Essences and QC and also buying speed for diamonds. That's all, no multi-summons. From HC it was reported, that you can got randomly one Epic Essence even for 25 Diamonds. Same color what is the lady is the given essence.

I think that we can safely say, that the game is IMBA, now with Kingdoms even more.

Enchantments are quite useful, mostly have Bronze and some Silver. Bronze is giving you usually 100-150 of primary skill or 500-1000HP. Silver provides more 300-500 for primary skills. Don't know more, don't have them. Of course, there are also some giving you special abilities under some conditions, something similar to your Lich awakening, more damage to enemeies under 25%HP.

Does Bersekr attack's passive works in dungeon?
(+1 to combo, probably not, which make it useless)

Pol wrote:Sirene, which goes after Hunchback. Both these units are pretty weak

So if you also use the Megalodon, the first round will be tough. But if you manage to get your hunchback through, you'll have plenty of time to restore the team in round 2.
The ifrit adds nice synergy, but that means you'll only have 1 slot available for both stun and dispel...

Does protection against debuffs work against the fallen angel?? I'd be surprised if it did
Are you suggesting coconuts migrate?
Top

35% protection debuff is nice but it cannot stay alone. I also need to re-roll combo dots so that may take quite a lot of time. Cause if I pass Anubis, Sorceress kill me. Given a chance I will try that

For buffs and theirs synergies I'm starting to creating a table. That is WIP. (Work in Progress)


Nobody's special attack is based on HP or mana.

I got a couple of Druids. Are they really good when levelled up? I know they didn't used to have Druids as player characters.
Top

I think Druid is the best cleanse + heal unit. If you have one, use her!

Is a Level 60 unevolved Druid better than a fully awakened Muse?

I'd take the muse over an unevolved druid. Mend can be pretty awesome (though I can highly recommend the statue for a medium sized mend unit). But once you evolve the Druid, her 10k party heal is hard to top.

Do you also spend diamonds on the first evolving offer? I do on the second, for the totems, but never thought the first one offers much. Only about what you get from doing one Grand Wish quest
Are you suggesting coconuts migrate?
Top

It was good to get started! So far I've missed one first offer and one second offer (which was actually the first one, for a Raptor First Evolve).

But okay, it sounds good to not get the one-off offer the first time from now on for me.

I never buy evolving offers. I find it better to farm then I can use diamonds in QBCs, challenge (CPs, shield) energy refills, and eventually multi-summons when there is an event I like.
Top

I have fully awaken Druidess and she is very nice mass healer. I miss mend sometimes, but she really doesn't need this perk, she can keep you team alive by herself. Of course with her in your team you need to stun/silence/eliminate red creatures ASAP (Boarbarians especially).

As for one time leveling offers - I used them from time to time, especially when I was low on resources (gems, ankhs) but with Kingdom and steady gems income from mines, I stopped doing that. Much better is to spend your diamonds buying stuff from Lady in the Lake (QCs, totems, idols, epic essences) or energy from shop and as for ankhs (and medium crystals for level ups), I farm wish quests on Lord difficulty.
If you have low resources, one time offers can be helpful but otherwise they are better ways to get what you need.

@Pol
Thanks, but I really, really don't want to be in any guild.
Top

Avonu wrote:I really, really don't want to be in any guild.

I get the lone wolf approach, but you really miss out on cool loot.
(especially if you join a guild that is kinda competitive with many active players.