New ways to suck your money. And here is a screenshot for anyone, who dosn't play this game. Ha, that I never clicked!

Many possibilities:
* You get a Castle and you will be able doing Siege
* You get your own quest map and will be free to defend it with your units
* And from that you will receive extra bonuses to get creatures above Awakened, to keep interest of long timers
* Et cetera..

I don't know if it's a new feature or I miss it earlier but look at throne this picture and on previous one: @Avonu
I somewhat hope that it will be better on bigger resolutions. This throne room is squeezed. From my point previous was better and you still cannot go to running quest from HS.

@Galaad
Or, don't kill me for blasphemy, you may be able to buy/win as reward a dot for reasonably high price.

@Avonu
That's because of current quest event, they always make unique temporary changes in GUIs for those (as well as in dungeon and the loading screens).

The new home screen yes, but what I think Avonu mentions is the chains, sword, axes and shield that fits the theme of current quest event.

Few tips from me:

- Kingdom need a lot of resources to expand. While you can get them all from quests or from Kingdom's mines, IMO the most precious are scrolls. So build and upgrade libraries whenever you have chance. Also, always try to buy their upgrades first. You will need a lot of scrolls to research upgrades.

- Kingdom need renown to expand and upgrade your castle. You get renown by building new buildings and by upgrading them. You have limited space, so upgrades will become essential after some time.

- You need a lot of scrolls to research need upgrades (200/300/400/etc.), so choose wisely what to research first. IMO Libriaries are prioryty with Sawmill and Ore mines next ones.
If you are low of low level tomes to upgrade Libriaries, do Shadow in the Sand, Scorched Earth, The Ivory Excavation and Ogre the Top (if this event is available) on squire difficult. Use Quick Quest option - it will use only 50 energy and 1 quick battle coin, instead of much more energy. The reward (in tomes) is not so different.

- Your Kingdom has place for limited number of buildings. Even max explored Kingdom lacks place for 4 buildings. IMO Treasures are the least worth to place them but you can also resign from 1 of each wood/ore/sulphur/mercury mine (there are 4 of wood/ore and 3 of sulphur/mercury btw).

- You can remove buildings from map and build something else on their place. Your removed building will not lost it level and upgrades.

- If you have more buildings than space to place them on Kingdom map, you can still upgrade your unused buildings. Place them on map, upgrade as much as you want and remove them. Their renown is stil added to Kingdom renown, even if they are in "reserve".

- Building production is depended of its level and creature stars number. Aweken creature (with red stars) is counted as additional level - so while common creature has 3 stars, fully awaken common has 6 stars (same number as boss). Use you fully awaken creatures (especially bosses) wisely.

- Once per day your Kingdom is visited by traders. They can sell you resources for tickets, tokens or even diamonds. While it's always good to buy from them, it's up to you if you want to buy their resources. If you are low with tickets or tokens for example, it's better to save them for other things.
Lady in the Lake trader (Castle 9 lvl) sell stuff for 25/50/99 diamonds. She has not so bad stuff but IMO diamonds are too important to spent them there.

- You can use Rush option for mines (in their panel), to get their resources now... for a price of few diamonds. Rush has a cooldown, so you only can use it once for a while. No, removing building from map and placing it again won't reset Rush option.

- While low level Kingdom is easy to expand, higher levels will cost much resources and more gold. So do at least once per day (or even twice) The Wealthiest Tavern quest whenever its available, so you never won't be short of gold.

- You will need tokens to upgrade your Castle, so it is always a good idea to have about 500-1000 in reserve.

This is great! And I will link here.

My kingdom ran out of tomes

Does anybody know a good way of acquiring them?
I find doing quests with tome rewards on Knight difficulty to get 1 or 2 not very efficient
Are you suggesting coconuts migrate?
Top

Yes, I have the same problem. Besides playing maps on Knight difficulty (which dropped 1-2 tomes per quest), I opened few Common Chests for 25 tokens to get 1-2 missing tomes but it's not the best way to spend your tokens.
There isn't a quick way to get tomes (unless you buy them for real money), so you need to farm these quests. There always will be not enough some resources, no matter what you do.
Top

Sometimes the merchants in quests give you more, token chests aren't that bad but usually have a tendency to give you everything but the one item you need.

IIRC the gnoll event quest is more generous on tomes, if you bring back the lamp to the nymph. She gives the low tomes even on high lvl diff!
Top

Yes, that event quest (IIRC it's named Ogre the Top) has two NPCs - Elsa and Anna

- where IIRC Elsa gives you totems, while Anna givees you tomes.
So far I found the best way to farm tomes is to totem quest on squire diffuculty using quick quest option. You pay only 50 energy and 1 quick battle coin (and you get 2 from daily quest) and get only half of map loot, but you save a lot energy and squire loot is nearly worthless on higher levels. You can do this only 2 per day, but nevertheless is worth if you are low of tomes.

Agreed, I tend to do the Knight diff though as I find the 'medium' fragments to be a bit scarcer.
Top

I bought stuff from Lady in the Lake (for 96 diamonds) after she was patched lately: Much better loot than before but IMO still not worth to buy anything from her.
Top

I wouldn't say so. Let just count the price for "Quick Coins". Even if I calculated possible discount in, it's 140 diamonds. I would call it a bargain, clearly.

I meant that it's not a good idea to spend your diamonds for buying RNG stuff from her. 100 diamonds is a lot and you are gambling with your hard earned (or even bought) currency. There are better ways to throw your diamonds away.

And can you change topic name for Kingdoms (or something like that)? It isn't upcoming game mode anymore.

Pol wrote:PS You have awfully much money.

This is mine (and only) result: 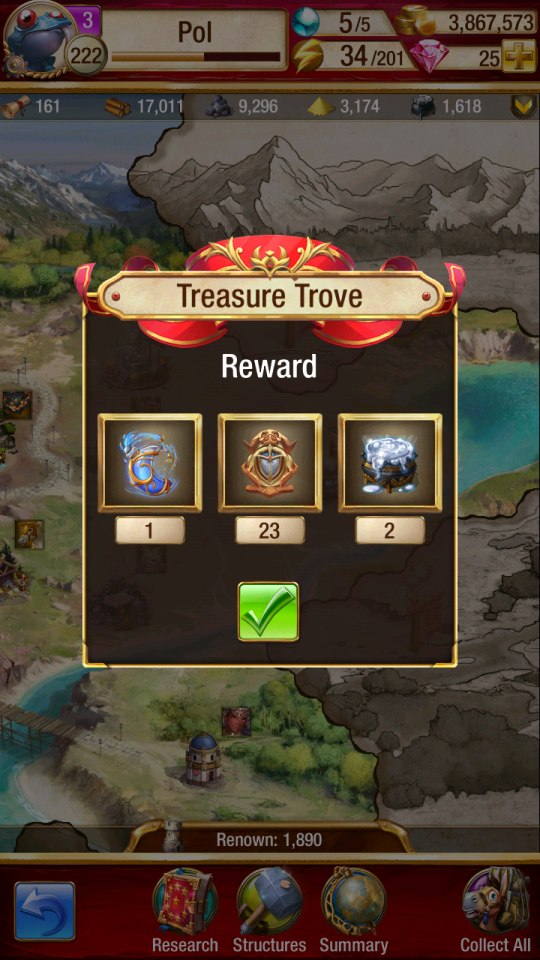 That's also not bad. But gambling, that sure is. No idea (+will/resources) to test, what can be achieved as worst/best results. And, yes, there are better ways how to invest your money!

The Kingdom itself is always in plus, however resources for its upgrades can be scarce. Got myself back with lacking lowest yellow gems and had a chance to fix it just a moment ago. And, being inspired by you, collected some money - 4M. That took me awfully lot of time, even with using the gold bonus.
Of course, then I spent some money for upg/awk and did this screenshot.
"We made it!"
The Archives | Collection of H3&WoG files | Older albeit still useful | CH Downloads
PC Specs: A10-7850K, FM2A88X+K, 16GB-1600, SSD-MLC-G3, 1TB-HDD-G3, MAYA44, SP10 500W Be Quiet
Top
Post Reply
80 posts