I'm hoping for some info this week.
In War: Resolution, In Defeat: Defiance, In Victory: Magnanimity, In Peace: Goodwill.
Top

Eldest of Queen Tuidhana’s three sons, he became the leader of the Soulscar clan after the Dark Elves' exile. Fueled with anger and bitterness, and facing his kind's extermination at the hand of the Dwarves, Raelag was approached Kha-Beleth, the Demon Sovereign… Despite all his efforts to escape his dark destiny, Raelag would eventually become Kha-Beleth’s servant.

His love for the Human Isabel would however turn him against his former master and force him to leave his position and seek redemption under the ghostly guidance of Tieru, the Dragon Knight.

Servants of Malassa, the Shadow Sorcerers are seekers of forbidden lore and masters of Dark Magic.

They totally accept the murmurs of the Darkness and are capable of finding the information that they want. Those who rise to the highest ranks undergo a secret ritual that lets them commune directly with Malassa, making them capable of dreamwalking. When the ritual is complete, their eyes become black and pupiless, and they never blink again.

So, all these "Which faction would you like to return with the expansion?" discussions?

How about all of them?
Top

Can someone change this topic name to proper expansion pack name?
Top

On it.
In War: Resolution, In Defeat: Defiance, In Victory: Magnanimity, In Peace: Goodwill.
Top

I said "proper expansion pack name" not that Shadow of Death rip-off. 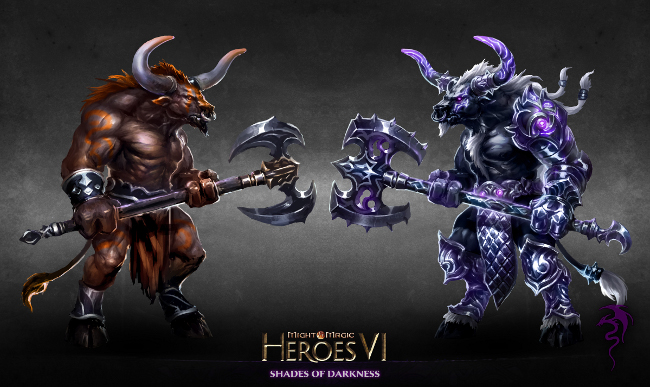 Like the Harpies and Centaurs, the Minotaurs are Beastmen, created by the Wizards of the Seven Cities in the year 512 YSD. Half-human and half-bull, the The Minotaur was meant to be the shock infantry to fight alongside the Centaur cavalry.


Now questions to Marzhin (or anyone who know the answers):
1) Why we have still 512 YSS date as Creation of Beastmen if this was retconned?
2) Silver Cities? It make not sense if Minotaurs are in Dungeon army ages before Silver Cities were founded.
Top

Also, I'm pretty sure minotaurs were slaves in h5. Perhaps they are going to do something naughty during the campaign.

The upgraded minotaur is a bit too much for my taste.
treants are dendrosexual 0_o
Top

Mirez wrote:Also, I'm pretty sure minotaurs were slaves in h5.

I guess hoping for a map generator in the expansion would be too much?
Top

Yes. They have confirmed that there will never be an RMG for Heroes 6 since the code originally made by Black Hole Entertainment is too complex and difficult to work with.
In War: Resolution, In Defeat: Defiance, In Victory: Magnanimity, In Peace: Goodwill.
Top

I'm wondering if they mean too complex as in "bad code" or just to much code.
"I did put the fires out."

I've seen an extract of the code and my opinion is: both.
In War: Resolution, In Defeat: Defiance, In Victory: Magnanimity, In Peace: Goodwill.
Top

So, basically, worst case scenario then.
"I did put the fires out."

As far as the editor is concerned, yes. It wasn't made to be simple - it was basically made for the developers/programmers themselves and not for the average player. It's a very powerful map design tool, it just isn't made for many people. That's why you only get a handful of maps: there are only a handful of people using it.
In War: Resolution, In Defeat: Defiance, In Victory: Magnanimity, In Peace: Goodwill.
Top

"Powerfull, but useless" i think i read somewhere =)

One would think the code would have been going through some QAish thing.
I can't say i know much about game development, but is it not possible to patch code to make it "better"? Maybe hire Carmack to rewrite the whole thing a wednesday afternoon?
"I did put the fires out."