Neidhaart wrote:I can't say i know much about game development, but is it not possible to patch code to make it "better"?

Possible, yes. But it would cost tens of thousands and take months of non-stop work. It's just not feasible.
In War: Resolution, In Defeat: Defiance, In Victory: Magnanimity, In Peace: Goodwill.
Top

Two more born to be purple

Assassin / Silencer
[img]http://sphotos-e.ak.fbcdn.net/hphotos-ak-snc7/430636_10151307417079588_1125786640_n.jpg[/img]
An Assassin is like the shadow of Malassa. As a Sylvan Elf is impossible to spot in the forest, an Assasin is invisible underground. He reveals himself only when he strikes. Usually wearing black clothes, an Assassin's favorite weapon is a pair of sharp and serrated daggers.

Manticore / Scorpicore
[img]http://sphotos-b.ak.fbcdn.net/hphotos-ak-ash3/542214_10151319618069588_2030858605_n.png[/img]
The Manticore is a Magical Beast created during the Mythic Age.
At that time, the surface of Ashan was irrigated by Dragon Veins. Beasts that drank these untammed rivers of dragonblood crystals were permantly altered by their powerful magic.
The Manticore seems to mix features of various animals: lion, bat, scorpion. The Manticore is notorious for its venomous stinger. Its poison corrodes the hardest materials like acid and cripples the muscles, inducing a progressive paralysis.

The Scorpicore is a Manticore that the Dark Elves exposed to an underground Nexus of dragonblood crystals attuned to the elemental powers of Darkness. This makes the magical beast more powerful, and more receptive to its master's commands.
Top

I know in game they will (perhaps) look a lot differently, but those are some really UGLY looking designs.
Top

Mirez wrote:Also, I'm pretty sure minotaurs were slaves in h5. Perhaps they are going to do something naughty during the campaign.

The upgraded minotaur is a bit too much for my taste.

Well obviously the Dark Elves stabbed their allies in the back. That makes them complete bastards, or perhaps just as bad as Academy and Haven (with the orcs).
Working on tracking the locations of Heroes IV battles. Stage 6 of campaign map finished, all initial Heroes IV campaigns mapped.

Okay, I really hope they rethink the "and then we make it purple!" for the minotaurs and manticores. It looks stupid. The other factions have troops with a similar color scheme, not with one color.

The assassin and upgrade looks alright, there's a bit more purple but he doesn't looks like someone dumped a bueckt full of purple paint on him.
Top

Well except for the Harpy, virtually all of the Stronghold units go red when they upgrade. Still, it seriously does look daft. Ought to see what Negativland over on Heroes Community can make of it.
Top

Well, I actually kinda liked this blend of black and purple, even the Minotaurs but with the Menticore it start getting ridiculous... 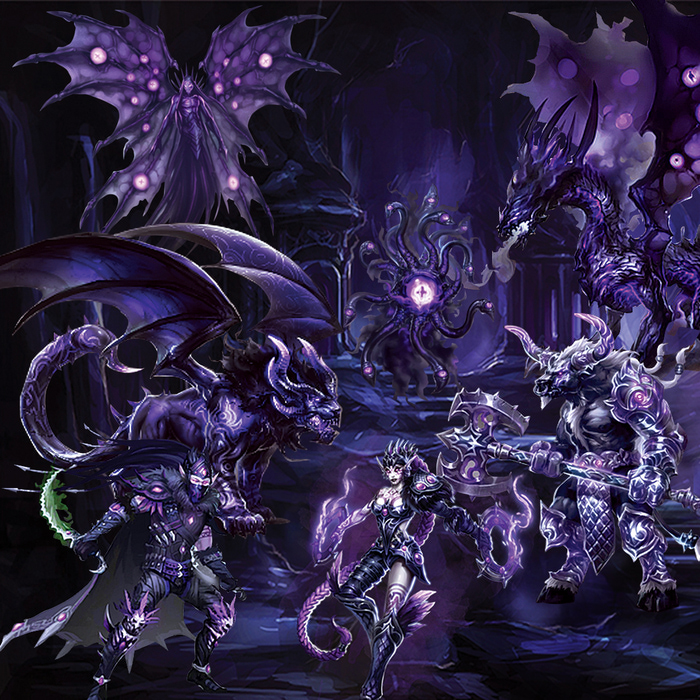 Challenge: Count the colors other than purple. See if you can reach double digits.
Top

Hey, it's Shades of Darkness afterall - and by darkness Ubisoft means purple.

Oh, and guess which unit is the best seen on this picture?


A: I am master of disguise, champion of shadows. I can hide on sight, strike and return to shadows and no one in entire Ashan can see me, especially underground.

L: Except for your radiant dagger.

I'm curious to see the creatures in-game. After all, these are artworks and probably overdone to look more striking.
In War: Resolution, In Defeat: Defiance, In Victory: Magnanimity, In Peace: Goodwill.
Top

Well we can sort of work out the "purpleness" of these models in expansion by looking shadow creatures and characters in H6.

The faceless NPC's and Heroes as well as the Daughter of Malassa, cate and Raelag in H6 do a lot of purple it isn't nearly as bright as those in the pic above. It is possible the purpleness will be consistent with these characters.
Top

Kalah wrote:I'm curious to see the creatures in-game. After all, these are artworks and probably overdone to look more striking.

To be honest, it doesn't matter so much in game, as game mechanics, bugs and balance are more important then if this or that unit is purple or pink. Well it doesn't as long as unit isn't ugly itself.
Top

Avonu wrote:Hey, it's Shades of Darkness afterall - and by darkness Ubisoft means purple.

I hereby call dibs on the nickname 'Fifty Shades of Purple'.

It is indeed quite over the top if you ask me.
Top

Flying Elves! (look at the background) 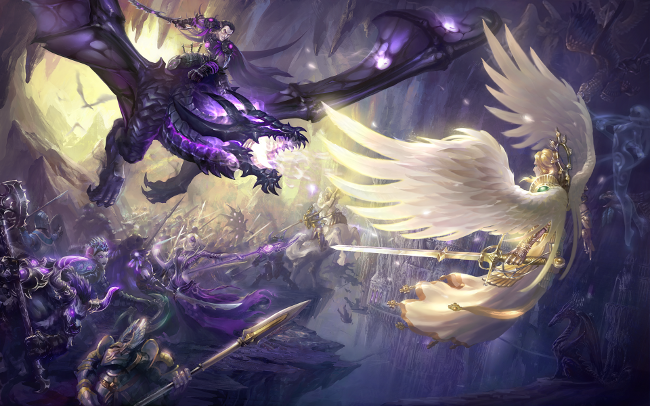 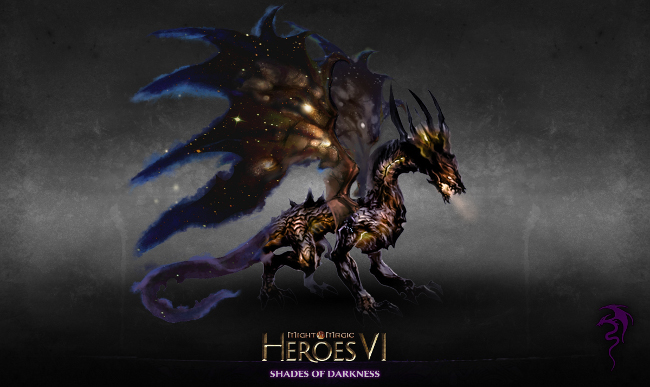 The Shadow Dragon is the avatar of Malassa, the Dragon Goddess of Darkness. They take the form of a dragon of onyx, with purple orbs embedded on their wings – these are the eyes of Malassa, capable of seeing any kind of shadows, litterary or metaphorically. The Shadow Lurkers are said to be born from these glowing orbs.
When a Shadow Dragon unfolds its wings in anger, the countless eyes mesmerize its enemies, summoning all kinds of terrifying nightmares in their broken minds. If a more deadly course of action is required, the Shadow Dragons can count on their physical might and their withering breath, that will slowly but surely consume their victim's lifeforce.


The legendary Black Dragons are the ultimate evolution of the Shadow Dragons. On their wings, the eyes of Malassa are replaced by intricate patterns of light constantly dissolving, like galaxies being swallowed by the eternal darkness of space.
Top

That Dragon isn't Black, its orangy-blacky-purply-blue!

And one more thing - Shades of Darkness takes place 100 years after H6 in times War under the Mountains and HV ToE scenario Hate breeds hate.
Top

looks like a lame fusion between asha and malassa.

It looks nice but it's not very creative...
treants are dendrosexual 0_o
Top

A century after the tragic events of Might & Magic Heroes VI, that determined the heroic fate of a dynasty, Shades of Darkness recounts, in two original campaigns, pivotal moments in Ashan’s darker history that will define the future of a decadent underground people and decide the survival of the dying cult of the Spider Queen. Determine the fates of two legendary factions; the Dark Elves of Dungeon and the Necromancers of Necropolis.


Ubisoft site for Shades of Darkness

Mozared wrote:
I hereby call dibs on the nickname 'Fifty Shades of Purple'.