Tbh, you're only complaining about something worthless. If you're looking for coherence in comparison to another universe, you're probably playing the wrong game.

I mean we've had Cerberus, MinotaurS and MedusaE when these creatures were unique and never existed as a race in the greek mythology.

I simply love the Fate Spinner. The creature looks really great and the mechanics look very interesting (dual form with separate abilities) and this creature is truely unique to the HoMM universe.
Top

All the Haven units' unupgraded versions look way better than their upgraded brethren. Except for the Griffins though, which both look equally FUGLY with that stupid chicken head.

And they really should cut down the heavenly yellow light, as the faction is too bright already.
"I saw the angel in the marble and carved until I set him free..." - Michelangelo
Top

Except for the tail.
In War: Resolution, In Defeat: Defiance, In Victory: Magnanimity, In Peace: Goodwill.
Top

I certainly did not expect the breeder. Is it from Lovecraft?
Edit: "demon overlord of proliferation" WTF?
Avatar image credit: N Lüdimois
Top

As they say, and then there was one. Only one more Haven unit to be revealed before they move on to the next faction. What's it gonna be folks?
I want to say a Priest type unit, but I think that may be too similar to the Priestess. If I had to take a wild guess, I'd go with something like a Paladin that we had in Heroes 1 & 2.
Top

oh come on! it's the frigging human torch
I do not approve
treants are dendrosexual 0_o
Top

Mirez wrote:oh come on! it's the frigging human torch
I do not approve

Come one, there are TONS of differences.
1) These are blue/yellow. The human torch was RED.
2) The torch was male
3) This girl has tattoos.

This is simply saying "In case you thought we were going more modest with the priestess..."

It is hard to comment. She looks fine, though could be less humanoid (why legs?), but it is one of the units that makes me feel sad and uncertain about the intentions of the developers and H6 success.
Avatar image credit: N Lüdimois
Top

Yeah, it almost seems like they have a quota for male/female creatures for each faction. While I don't mind some variety, it could be stupendous and as an end in itself if taken too far. I hope there aren't any Afroamerican elves or Chinese orcs because they have an ethnic quota too.
Beware Kreegans bearing gifts.
Top

Otherwise I really like the Fuc... Breeder. At least like an idea, dunoo if it fits in any of my ideas of the M&M Universe. At all. It's not too much "faery tale", if you know what I mean.
Top

They had something going with the Necro elites. They had a point with the Demon elites; it looks hideous; exactly as it should. Not sure how it will work but they had a point.

Then they introduce this. Not like we didn't know a unit like this was comming (keeping the art work in mind) yet still... I'm a bit dissapointed. I was hoping for some kind of, I dunno, massive falcon-like thunderbird...

Though I disagree over the sex of the radiant/blazing glory. I prefer a womanlike avatar over a male. I am a man after all...

Everyone complaine much, but I love these new units. If not by their look (which is mostly cool if not awesome) then by the simple fact they are NEW. Heroes was getting monotonic and heroes 5 was the worst of them all in that category - trying to restore heroes 3 after getting scared from the bad comments on heroes 4. When I saw they getting this one in the same world, with the same fractions - again Heaven, Inferno and Necro - I was plain sick and stop bothering or carring about this new game.

To kill the bone dragon AND the devil? To make a diffrent units structre? Now that's bold. Not to mention all of the new units they added and the changes they put for the old units (cavalier, monk, etc). I find it fresh and exiting.

It just looks like they're inserting many more female-style units, while keeping the H5 aura about their artwork.

In H5, Haven had no female unit, now we have 3. In spite of all units that are available, angels could have gone. With that Glory idea, that's too much with holy units adding a Champion with celestial powers as well. They could bring forth a siege or war machine as a regular troop, for instance.

Necropolis had no female unit, now we have 2. Those ghouls are awful, simply awful. It seems they are making Necropolis to become a huge Horror Lab, with many flawed experiments. They could have made ghouls like regular zombies - which they were supposed to be - and after some damage taken, they could split in half and crawl around the battlefield, while their remains (legs, organs, etc) would infect an area where they stood; dunno, but not that claw-ninja-muay-thai-fashion ghoul. Lamasu's first name sounds all the more worse. But I'm relieved with the idea of not having wraights and bone dragons this time. The less they make dragons, the better. Bone dragon can come as a spell or a dwelling unit only, only hireable by killing dragons (black or red or whatever they'll put there). The Necropolis Champion looks suitable for the task.

Inferno kept the same succubus idea - although I must say that I'm rather pleased with the no-devil layout, even with that tormented guy to mess up a bit with the upcoming Inferno town. Pit fiends are better now as champions. Nothing much to add regarding other troops, even that breeder one.

The other two factions...hum, perhaps they'll bring Sylvan and Academy? Given that they say something regarding Lamasu's coming from Wizarding failure, that ought to point that out. Although that the idea of having no neutral factions is a bit lame.

Regarding bosses, having Titan as a boss as well as the Devil, that's a much nicer expectative than having them as units.
"There’s nothing to fear but fear itself and maybe some mild to moderate jellification of bones." Cave Johnson, Portal 2.

Come to think of it; I wonder whether the Necropolis has gone from a 'diverse but weak and lots of units' type of playing to a 'hit quick and hard' type of play.

Wonder what the final fractions will show.
Grah!
Top

My expectations for this game are dropping by the score every time new news hit.

Seriously, Ubi should have hired 1C to make the game. They proved with the King's Bounty games they have what it takes to create a complex tactical game.

It is hard to comment. She looks fine, though could be less humanoid (why legs?), but it is one of the units that makes me feel sad and uncertain about the intentions of the developers and H6 success.

It looks more like a Genie, if they added some frickin clothes on her. (don't these people know sex appeal is increased by the amount of skimpy clothing girls wear? ) Seriously though, this as a Haven unit... is just wrong. I imagine priests, paladins and angels are getting along just fine with the totally naked spirits...

You know, Heroes Online went with the HOMM3 roster and turned a lot of units female too (Zealots, Wraiths, Efreeti) but they were not as over-the-top as here, and the changed units did not look out of place. Most factions only had one female unit, and orcs had none. But since this is Ubi, who felt they have to add an animal-skin wearing HUMAN babe to the Orc faction last time (it still boggles my mind how that could happen... I certainly would not like to be walking around in such an outfit amongst battle-frenzied male orcs and centaurs)... this is not so surprising.
Last edited by BB Shockwave on Dec 5 2010, 9:50, edited 1 time in total.
Top 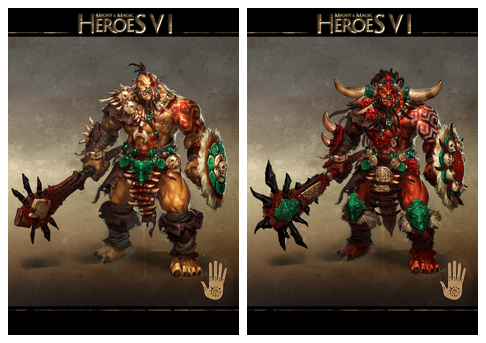 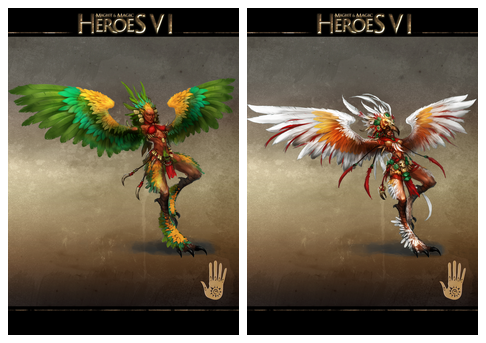 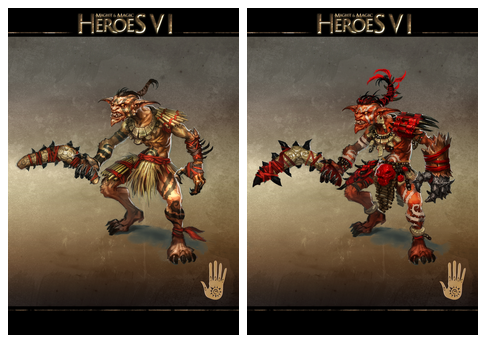 Hell has frozen over...
Top

"Michael the archangel, one of the most iconic characters in Might & Magic Heroes VI."
Top

Stronghold! What an interesting twist. I hope they won't bring elfs/academy as the 5#. Also, I hope this stronghold will have more than orcs. Probably a cyclope, a roc, some beast-behemoth-thing/ogre and a dinosaur as the champion.
I wish the last town will be actually new or creative. I'm still disappointed of the necro town (I'm already sick of it from all the previous games. The structre almost didn't change and undeads are too common in fantasy games these days).
Top
Post Reply
228 posts