Shamans are new?! That's funny, the version of H5 TotE i played already had them.

Looks to me like they just replaced the Wyvern with the Harpies... which might hint at the Wyvern being included somewhere else (i hope).


Or that the Poa-Kai is actuely used as a Boss.
In the german description, harpies live on the "Poa Islands" Thats why I was surprised that they are not included in the lineup.
Top

No classic Wolf/Wolf Rider and yet the harpy and the centaur return from H4 to haunt this faction again...
Add to this fewer factions (overall), fewer tiers, many changes to classic aspects of the game and one can not overlook the notion that game begins to look more and more like fans least favourite H4.

I have to admit that the units look great and all fit asrtistically to the "jungle" theme, yet this is a big step off of the original Barbarian concept and I don't like it.
Top

Mirez wrote:I think it's good. I hate having to ant-line my heroes to get an army from a to b in time.

I still think it will do more harm then good. I hope you wont be the one complaining that the game is to easy...

The Sandor (sounds to much like Sandro) reminded me of this 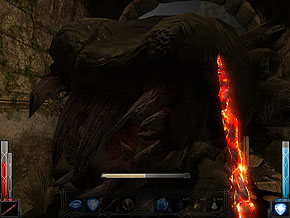 Isn't that "you can buy any unit everywhere" just a speculation? At the very least you'd need the dwellings built to train the troops. That alone should mean that unless you have a fully upped town there, you won't be able to restock on everything.

I don't find the pools too bad as a general idea. I mean, it's not like you keep track of how much gold you have on your hero and in the treasury of each town... so going by that line of thought, if you consider your units resources to be used/trained, it makes sense that you don't care about where they are, only that they are available. At least as much sense as anything in the HoMM game world anyway.
Top

Er, didn't really like this Stronghold faction, although I liked (a little bit) of the Mayan fashion. The reasons are something like others have stated: HoMM V version 2 (not that Haven, Necropolis or Inferno are also immune to this repetition), but this one seem less fun that the latter game - I say I'll also miss Wyverns / why don't they get rid of Cyclops? *becoming angry all of a sudden*
"There’s nothing to fear but fear itself and maybe some mild to moderate jellification of bones." Cave Johnson, Portal 2.

Panda Tar wrote:I say I'll also miss Wyverns / why don't they get rid of Cyclops? *becoming angry all of a sudden*

First off: I've only seen 6 different unit types of which no clear cyclops; IMHO it's rather a troll than a cyclops. That leaves 1 spot for a wyvern; which, because HoMM VI is going to be (could this be possible?) overbalanced (that's the second

) is very likely seeing as the only other flyer are the harpies (necropolis has 2 flyers, haven has 3, inferno has several units with wings who'll they'll most like won't use; yet I'd expect 2 units who'll either fly of teleport - that leads to the conclusion that stronghold will have a second flyer as well)
Grah!
Top

Thelonious wrote:First off: I've only seen 6 different unit types of which no clear cyclops;

Here you go, look at them once more.

Hmm I missed that cyclops. It looks a bit more hunched this time round though. To bad. And I don't think I'll like the pather warrior...
Grah!
Top

i hope we get Wyverns as neutrals AT LEAST. I loved the Foul ones. A bit weak but their backstory was interesting. Read "shamans put them on a special diet", rotten salads

jaguar and Panther warriors? Hint that mighty cats might be neutrals too?
Top

And we have names for the new units now.

I feel a bad about this new stronghold. They are doing again the same mistake from HOMM5 with the same creatures all other again - too many orcs in too many similiar outfits. The ogre looks just like a big orc itself.

Why coudn't they continue with the good vareity they put in the core units?

I just got a flashback now and I figure I dreamed today they revived the fortress and it was awesome. I wonder why I dreamed it today as I didn't think about HOMM for a long time...
Top

anyone else noticed that the goblin shares resemblance with the ghoul, tormentor and the maniac? Or is it just me?
Grah!
Top

Someone even posted a pic of that (well sans the goblin, coz it was before the Stronghold got announced).

Also, are they hinting at us being able to make choices on what each sibling chooses to do in the campaigns here or are those just attempts at generating interest in the story: http://might-and-magic.ubi.com/heroes-6 ... -Maintab-3 (this is about all the bios, they all seem to do that, even if it looks like someone just put them through google translate)
Disclaimer: May contain sarcasm!
I have never faked a sarcasm in my entire life. - ???
"With ABC deleting dynamite gags from cartoons, do you find that your children are using explosives less frequently?" — Mark LoPresti

"Avatars of Shalassa, the Dragon-goddess of water, these creatures are often found protecting places both sacred and forbidden to common mortals. A Dragon Eel masters the magical powers from which it draws its name, and is summoned in times of great necessity by those closest to Shalassa. It is a force a nature that only the most courageous of armies would dare challenge in battle."
In War: Resolution, In Defeat: Defiance, In Victory: Magnanimity, In Peace: Goodwill.
Top

So the Dragon-goddess"es" of water I guess??

Another mention of Nagas in the ghoul's description...

They're avatars of Shalassa, not Shalassa herself. Just like black dragons were avatars of Malassa or like Mother Namtaru is an avatar of Asha.
Top
Post Reply
228 posts