I always wonder, what do the male demons do with the female angels that are captured? Just kill them right off?
Top

Apparently demons and angels are asexual so they won't be exchanging recipes for apple pie if that is what you meant.
treants are dendrosexual 0_o
Top

And frankly, that's a bit of the lore I'd not wish to delve into actually. Because I simply don't care.

So December... with all the units of the known faction released, will they release a new faction in december?
Grah!
Top

Why would anyone want Black Dragons in a possible Faceless faction?

As of now there are Bosses too. Why shouldnt the Blackies be honored to fit as a Boss?

Im sure there will be quite a few dragon bosses, neutrals etc. And I hope so. Since we KINDA got way too many dragons in H5 as top tier units.

My theory is that during or more likely at the end of campaigns, the respective factions defeat a boss dragon which later is incorporated into the faction and even later, as in H5 are shown to be top tier units but in exchange of losing some power in case of betrayal. Some kind of precausion...

Also, anyone noticed a water monster/wyrm like creature in one of the videos?? Is it me or does it remind me of the sea wyrm like creature from the classic Might and Magic 6? game? Im not sure where I found the, should have saved those site. Youtube + Lets play M&M 6 and H6 should get some info.
Top

I think dragons will only return as bosses. Mainly since most HoMM players will agree that there were to many dragons in HoMM V (or MM:HV)

I'm not sure whether fans will like this either; they did like to play with a few dragons...
Grah!
Top

The Black Dragon sounds so likely unique, so much like a boss, like a keeper of a powerful secret or treasure. It can be seen as a vial to the unknown itself, like a seal - whether you kill the Black Dragon to release the power of a faction upon the world or unleash its true form. Dunno. Give this Black Dragon a real job to become a quest worth of its name perhaps?

That teaser video seems to show a faceless stealing that blade, doesn't it (the angel that's fallen)? Or did I get that wrong? Being that the case, the Faceless must be a unique hero - a demon.

As for the other factions, I think wizards will come, whether they have mingled 'naga' stereotypes with them (like the rakshasa conga-tcha-tcha-tcha from H5) or not, the Lamasu's description gave away a possibility, as well the 'humanoid' rule you guys are all talking about.

If there's something new there...with humanoids...hum, is there the water wyrm on one of the videos then? So, will they bring an "ocean faction"? Mermaids, hyppocampi, water elemental, merman (trident wielding fighter), lyzard warrior, sea dragon/wyrm, giant ray (tamed, with a rider, for instance). There are plenty of units to put there and there are humanoids as well amongst the mythical. That's a possibility.
"There’s nothing to fear but fear itself and maybe some mild to moderate jellification of bones." Cave Johnson, Portal 2.

Now that it comes to it and if my memory is not failing me, isn't there a GNOLL artwork somewhere? I recall seeing it not too long ago.
"There’s nothing to fear but fear itself and maybe some mild to moderate jellification of bones." Cave Johnson, Portal 2.

If you find a gnoll artwork for H6 then it has to be fake since it's in the list of the abandonned creatures (along with trolls, gremlins and leprechauns)
Top

You probably means this? 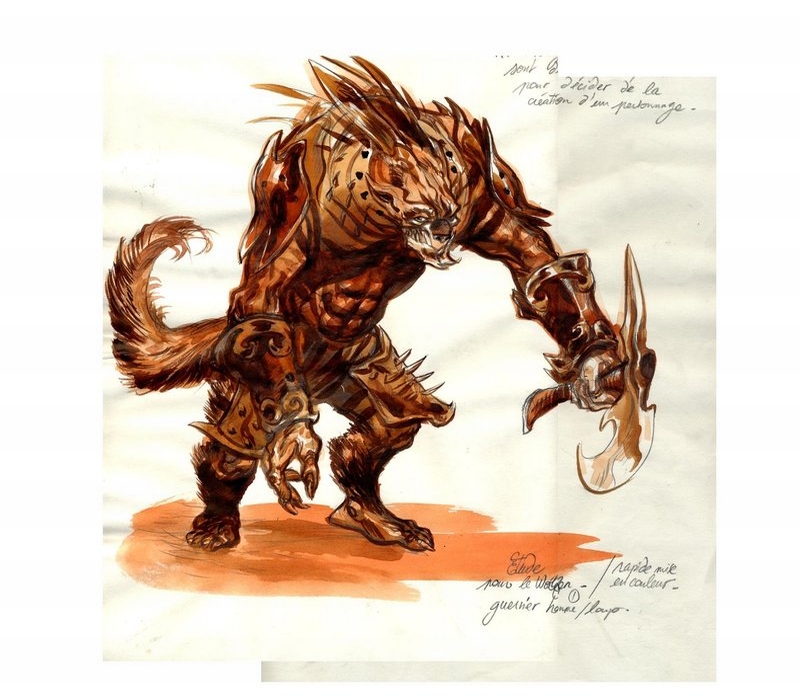 Nival has done that like several years ago and they don't work on the game anymore, so it's safe to assume that any of their sketches are outdated

Also, what I wrote above was said in an interview in August '11.
Top

Gnolls were great though...
Grah!
Top

Thelonious wrote:Gnolls were great though...

Why, though? To me they were a random, run of the mill unit that happened to look like a dog.
Jesus saves, Allah forgives, Cthulhu thinks you'd make a nice sandwich.
Top

Most of the swamp creatues in H3 were fun, because they posed a greater challenge.
Top

Metathron wrote:Why, though? To me they were a random, run of the mill unit that happened to look like a dog.

Metathron wrote:Why, though? To me they were a random, run of the mill unit that happened to look like a dog.


Run-of-the-mill describes most of the units in the series, I mean dragons,vampires, unicorns skeletons, demons, angels, etc. what's new about them?
Top

No. Run of the mill in the sense they were a walker with no abilities and nothing memorable about them. Might as well have slapped a fish or locust face on there.
Jesus saves, Allah forgives, Cthulhu thinks you'd make a nice sandwich.
Top

IIRC it's old concept art for HVI Gnoll from NIval.

I'm not sure, but I would hazard a guess that it's not it, because I saw a black and white and more wolfish unit (also it was a small pic, like 100 x 100) holding a flail. There was another coloured pic aside the one I saw, and that might be this one.
"There’s nothing to fear but fear itself and maybe some mild to moderate jellification of bones." Cave Johnson, Portal 2.

Users browsing this forum: No registered users and 16 guests