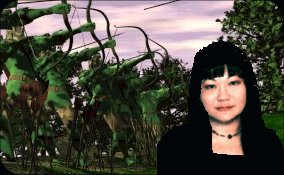 Molding Heroes
April Lee is a Graphic
Artist at New World Computing. She worked on Heroes II, Heroes III and
Armageddon's Blade, creating well-known graphics such as the H2 Mummy, the
Manticore and the Gnoll. She tells us about the world of graphics and
her work on Heroes IV.


Note: All pictures in this article
are property of April Lee or 3DO. Reprinted with permission.

To learn more about April Lee and
her work,

Angelspit:
You have worked with various media before, such as CD-ROM games, Collectible Card
Games, RPG Books, Magazines, and so on. What is your favorite one? Which one do you think is the most rewarding?

April Lee: Most of my work has been either in computer games or card games. I've got
to say that my favorite is the card games. I like working in traditional mediums, and sometimes we are given a lot of artistic license to create
people, creatures, places and objects that can really affect the look of the
game.

In computer games, I tend to be assigned all kinds of different things and
since it IS so collaborative, I try to match my style to the game, rather than try to affect the look of the game. This isn't quite as satisfying as
the card games, especially since the artists aren't really credited that well. With the card games, my name is usually on every piece of work I do.
With computer game art, the art may have been begun by another artist and finished or touched up by yet another, so it's hard to point to anything
that's really mine.

That said, I do enjoy modeling and animating on the computer. It's very different than painting, and it's fun to contribute to a team effort.

Angelspit: What is a typical day of work for you? Since you are a freelancer, I
guess you must work from home? Do you have a particular schedule?

April: Actually, I work full-time at New World Computing/3DO. And if you know
anything about computer game companies, this means that 50 or 60 hour work
weeks are not uncommon. Almost every single other hour, and most of my sleeping time, is consumed by my free-lance illustration work. Actually,
I'm getting a bit tired of doing both--it does wear a normal person out. I've been doing it for 7 years straight, which is pretty hard-core.
Schedule is usually: into the office by 10am, out by 9 or 10, then eat and
work until 2 or 3 am, weekdays. Weekends--catch up on sleep, work in afternoon and nights until 3 or 4 am.

I also go to conventions and sell artwork and prints--which can also be
incredibly time-consuming.

Angelspit: How did you come to work with New World Computing? You said you knew
someone there? Is it easy to get in touch with gaming companies?

April: I was hired at New World 5 years ago, for character animation on Heroes 2.
Before that I was working for a small game developer called The Dreamers Guild (not to be confused with the big-time

DreamWorks!). Several co-workers had left there to work for New World, who offered better pay, and
they passed my name on to the art director. I had the exact skills they were looking for, so it was a natural transition.
The first game I ever
worked on (at the Dreamers Guild) was "Inherit the Earth", which was published by New World. And I had also done free-lance, black and white
illustrations (non-digital) for New World's manuals from 1989-95. So I actually had a rather long association with the company. It was also local
to me, which didn't hurt.

Now, breaking into computer games with no experience is a bit harder. It wasn't too hard when I started in the early '90s, since the technology was
still evolving and there were very few--almost NO-- places that actually taught the computer graphic skills. I was trained as an Illustrator in
traditional media (at Art Center College of Design in Pasadena), and that alone helped get me in. But I also had been a fantasy artist, showing my
art at Science Fiction conventions for years, so people at the Dreamers Guild knew me and I originally started doing concept sketches for them.
Since all companies at that time were critically short of computer artists,
and the artwork in games was becoming increasingly involved and increasingly
a large part of the game, they were practically begging me to work on the
computer -- willing to train me and give me a computer at home to learn on,
etc. Now that there are more schools that teach the programs, and the programs are more difficult to learn, it's probably harder to break in.
Although an illustrator can almost still do it the way I did (starting with
concept sketches)--as long as they know at least a bit of PhotoShop. I learned everything on the job, though, which isn't how it's being done these
days.

Angelspit: You said working on the art for a computer game is a collaborative
effort. It must be difficult to work with people with different background
and styles, to know where your work starts and where it ends. Please describe how this process works. Also, which tools do you use?

April: I'm not very up on all the Game Design aspects--but it begins with the
Designers and the Leads--in art and programming. The designers need to start a Design Document that covers the game play and all the elements. As
soon as they have some idea of what assets and programming they will need,
those leads will come in and figure out the time and resources (in artists
and programmers), and the producer/lead designer will organize the writers
and other departments, and interface with, perhaps, level or map design teams, testers, marketing, etc. Then things start going into production.
In art, often there will be a concept sketch artist who will be communicating the look of the game, determined by the art director.
Modelers and texture artists and 2d/interface artists will hopefully get their direction from the art director and the concept sketches. With Heroes
4, the art director was doing some concept sketches, as well as various artists.
If I was assigned to do a building for the Adventure Map, say, a Library, I would get a sketch and I would model and texture the item
based on that, and perhaps animate it, and submit it to the art director for
approval, then it would get plugged into to the game by the asset-coordinator. The maps would be assembled by the map
designers on Map Editors created by the programmers, etc.

Most game companies, New World included, use 3D Studio-Max and PhotoShop, primarily, along with other programs to do specialty
things.

Angelspit: How do you manage to "enter" the Might and Magic universe, in other
words, where do you get the information you need to create such a good-looking
creature? Did Classic authors, mythology or the other Heroes games inspire you?

April: This is mostly left up to those doing the sketches. I've done
some now and then. MM tends to be very "classic" fantasy/rpg--which means the images
most people are familiar with--vaguely Northern European medieval-like society, with generic dwarves, halflings, elves, etc. We just use whatever
visual inspiration we like to try not to make things mind-numbingly boring
and repetitive. Hopefully, we are creative and interested enough to do this, at the same time, making sure we're not doing something TOO out there
so that it doesn't fit into the general look of the game.

Angelspit: Are you a gamer yourself? If so, what are your favorite games,
of any kind?

April: I started role-playing (AD&D, Runequest, C&S, Traveler) decades ago, but
haven't had much time to do that lately. I can still think of playing paper
rpg's since it's up to the GM to do all the work and planning and I can just
join in a session for an afternoon or evening. I haven't had time to put into a computer rpg (I have NOT gotten through ANY MM game--or anything
similar). And I can't keep up with the card games, either. I can do some
lunchtime multi-player Unreal Tournament, now and then!

Angelspit:
I just cannot resist: can you say a little something about Heroes 4? I
know you must be under a NDA, but something like "there's a
new creature, and it's brown and ugly!" would be fun!

April: Hmmm... I'm not up on the creatures. There are plenty of the Usual
Suspects, however... I have friends who are Heroes fanatics and I am VERY
frustrating for them, since I really don't read the design doc and can't tell them what's new, even if I wasn't under a
non-disclosure act...

Angelspit: Thank you very
much for your time April! We can't wait to see the results of your good
work on Heroes IV. Best of luck in the future!