Celestial Heavens:
Hello, and thank you for agreeing to do this interview with Celestial
Heavens. David Botan: No problem.
CH: Ok, first up,
what was your exact position at NWC and what did it entail? DB: I was a Level Designer II and my main responsibility was creating
maps for the Heroes series using the proprietary editor. This sometimes involved
writing text for the in-game story and custom hero bios. In between Heroes games
I would either help out on other projects (when there were others) or assist
others in small tasks.
CH: Do you have any history with
playing the Heroes of Might and MagicGames?DB : My first contact with Heroes was “King’s Bounty” (the
prelude to the Heroes series as every true fan knows) for the Commodore 64 and I
loved it. After I was hired as a tester some 7 years ago, I started playing and
testing Heroes 1 when the first patch was released. I play-tested Heroes 2 next
and then started doing Level Design for 3 and 4 (along with their
expansions).
CH: What is your opinion on the latest
incarnation in the series?DB : Well,
there’s no doubt that the latest version was rushed. 3DO’s schedules are never
easy. I think if the A.I. had more time, in particular, the game would have been
a true AAA title, but as it was, I think we made a good game.
CH: How did the map-making process work at
the company? Did more than one person usually work on a single
mapDB : Usually with campaign maps the designers
would give a specific concept of what they wanted and then we were free to
expand on the little things. On single player maps it was more free-form: we
were told what sizes needed to be made and how many, and that was it. The level
designers did all the rest. Of course this varied by designer and project.
On the last two expansions we were given even more leeway on campaign maps,
which was almost a necessity since there were so few of us left. As for the
second question, the artists did the terrain for most of the “Picture maps” (the
ones that actually looked like something in the mini-map) and a few of the
normal terrain maps. Then they are passed along to the level designer(s) for
playability purposes, adding towns, power-ups and such. If we were really rushed
the artists did most of the map terrains.
CH: Do you use the map editor included
in the game to make the maps ordo you have other tools at your
disposal?DB : I used the same editor that the public used, though I would use beta versions
at first so we could get the maps done quickly. 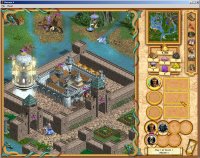 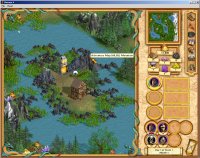 Two of David's maps for the Heroes IV expansions
CH: Was there a particular reason why
the story lines in the expansion campaign maps were markedly thinner than those
in the originalcampaigns?DB :
Yes, the original designers for Heroes IV wanted
loads of story-related text. They even hired a writer to handle it all. I built
my maps around the text in most cases. Unfortunately at the end of Heroes IV
when most of the team was let go, the ones that were left wanted less text. I,
for one, like a good story, but as a map-maker, I follow orders, so less text it
was. I think the problem was that people expected lots of text after Heroes IV.
In Heroes V, I wouldn’t expect a big, elaborate story, but I would expect great
game-play and a much-improved A.I.
CH: As a professional map-maker, do you
have any tips for community map-makers?DB :
Well, unfortunately, as a level designer I didn’t get the chance
to make the kinds of maps I wanted to make many times because of time
constraints and other reasons, but the fans are lucky because they have this
time. Anyway, this is my advice: make a map you know you’ll have fun playing,
write a great story with interesting events (this doesn’t necessarily mean
complicated, most of my events were simple), and don’t hide resources and
artifacts behind trees or mountains. Pathways should always be clear and wide
unless you want it to be a choke point guarded by a monster or gate, and last
but not least: play-balance, play-balance, play-balance!
CH: How aware are the staff at 3DO of
the game community (news, usermaps, forum opinions, add-ons
etc.)?DB : I browsed the forums and read public opinion
a lot. As for Evil C, he also did a lot of browsing (especially as a moderator
on the 3DO message boards). As for the rest I couldn’t really tell you. I think
JVC is generally aware of what the users want but in the end he’s the big boss,
and if everyone is screaming to get a better A.I. and he feels it would be too
much of a change, well then, there will be no A.I. changes.
CH: Do you (or other staff) ever play
custom maps?DB : Generally no (as far as I
could tell when I was there), we did not have a lot of time to play user-made
maps. I did play a few at the end of the WOW expansion though, the ones that
were from the contest and thought they were generally good.
CH: What is the company attitude
towards making game-play balancechanges in patches?DB :
Not very good. New World has rarely made game-play balance changes
in patches. I would have loved the necromancy skill toned down as well as the
Ogre mage to have more variety of spells to cast, but once again that decision
came from the top. In the end I think NWC just didn’t have enough time to make
changes and then play- test them again. I know I was usually too busy making
maps for the next expansion to have played-balanced my campaigns again.
CH: Thanks again for your time, we
appreciate your comments!DB : You’re welcome. I
just hope one day I’ll be able to make maps professionally once again. Oh and
one last thing, if anyone wishes to contact me directly my e-mail is [url=https://www.celestialheavens.com/mailto:Davidbld@Yahoo.com]Davidbld@Yahoo.com. I would be happy to
answer any further questions.