MM7Rev4modR1 a mod for might and magic 7 has been released!

The role-playing games (I-X) that started it all and the various spin-offs (including Dark Messiah).
Post Reply
First unread post • 545 posts

If you are talking about the Barrow Downs kill all the monsters quest, you have to kill ALL the monsters outside. Most of which fly, and flying creatures aren't usually affected by Armageddon.
Top

Are the 3 bows of carnage at emerald island? I can't find them after clearing out the whole island. Where are they located?
Top

No, there aren't any actually on the island, although there are some decent normal bows.

The first two carnage bows are in Castle Harmondale and basically trivialize the majority of the game. You don't even really need the third one, but it's relatively easy to find (although I forgot where exactly it is).
Top

I am playing this fantastic mod for the 4th time but this one I can't figure where to find Evermorn Island key. I thought it was in Barrows but cleaned all and nothing. Anyone still around to help?
All my scenarios for Heroes
Top

Salamandre wrote:I am playing this fantastic mod for the 4th time but this one I can't figure where to find Evermorn Island key. I thought it was in Barrows but cleaned all and nothing. Anyone still around to help?

It's on the Evenmorn Islands, on the island with the Temple of the Sun.
Top

Thanks, got it.
All my scenarios for Heroes
Top 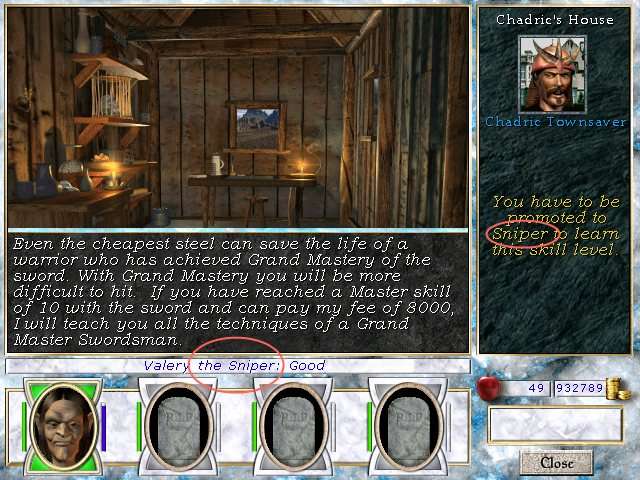 It's a text bug probably due to the class change quest. Archer class has never been able to get GM sword. If that isn't a Champion or Black Knight, he can't learn GM sword.
Top

Not sure about, I play with class skills tables modified (Grayface MM extension), and I checked sniper can get master sword, but looks like I have to move the condition to previous, master archer.
All my scenarios for Heroes
Top

Well if it is a separate mod on top of the Rev4 mod, Grayface would be the one that can answer and you might post this in the Greyface MM7 patch thread. This doesn't happen in the standard Rev4 Install.
Top

Mn wrote: Lady K told You to ask any person in Erathia about coding wizard (summer house near docks), only at summer, after June 15(?)

No one is there? Maybe I did that part? What did the person in the house say?

i guess you've waited till that date - it was your mistake. i got the same problem too.

you should be on other map till that date and travel to erathia - in that case code will trigger and disired NPC will be there.

I am wondering someone can help me with this. I've read this thread beforehand and was aware of this. Right now its may 4th, I've talked to Lady K on Evernmorn and I'm in stonecity about to train(because its cheap! got 25->40 available) I've tried different dates of getting out of training and still the summer house next to docs is EMPTY no matter what

One minor detail I omitted is that I left some just quest items i left in the chest next to it. perhaps thats the problem ?!

cameback, removed the the stuff, went back to train etc, still same result... nothing... HELP!

edit #2: FALSE ALARM!! Turns out Summer house thing is false. EAO The Lector resides in the house nearby but not in the actual summer house. Found it.
Top

Hey guys I'm really sorry for the spam. I've searched the heck out of these boards with no results. Duchess of Deyja once again gave vague results. "you must pray at the the altar" these are spread throughout entire Erathia... I really really do appreciate counteless hours BDJ / Maestro put in into this mod but quests like these really make me /facepalm. Can anyone give me a hint to the specific location of this shrine ? Much appreciated

It is the one in Harmondale east of the southern village that goes to Eeofol in the base game. There are plenty of rules for that dungeon though (like no saving at all), so be ready when you head in.
Top

I feel like I'm stuck. Promotions are not accessible at the moment (such as many dungeons, sealed with magic, caved in, too dangerous etc.). I don't know how to get access to the second floor of Harmondale. I might be missing something. I'm also trying to light up the signals the Quest in Harmondale Stables ask me to. I had the first lit before getting to know about this quest. After that, I can lit the one going to Barrows Downs direction, but the one I lit before, going to Erathia, that one I cannot lit anymore. So Idk what to do. I also got the map to Evernmorn Islands, but I cannot get a boat there. I'm not sure if it becomes available only after completing the Priest quest, but the priest quest is to be done in Emerald Island, which I have no idea how to get to. My cleric is already 'of the sun' by doing some easy things, but the other promotions are completely stuck (Thief is ok).
"There’s nothing to fear but fear itself and maybe some mild to moderate jellification of bones." Cave Johnson, Portal 2.

Promotions should only become available once you finish the courrier quests and if you got promotions done before that, you probably found a bug. You should get a "Five Festivals" message when you try to get promoted.

In order to clear the upper level of Harmondale you need to press the blue torch which will teleport you up.

Just like the base game, unless you have the quest completed Evermorn doesn't open up.
Top

Thank you, Arret. I felt like I had talked to all npcs I could find, but the blue torch wasn't something I was paying attention. The courier quest is half way done. But at least now I know how to proceed.

Arret wrote:Promotions should only become available once you finish the courrier quests and if you got promotions done before that, you probably found a bug.

Ah, this was my mistake explaining to you. I played MM 8 before, and I got that promotion to Priest of the Sun rather faster than anything else and I got confused, mixing up this and that. The MM7 Priest Promotion was only after I got the Emerald Key.

The only 'bugs' I might have come across were being teleported back to Harmondale when clicking on the shrine in front of the School of Sorcery (I don't think that should happen), the J.V.C Corral Quest that demands I lit the signals that WON'T lit and I don't have a clue how to acquire the cutlass he requires...and that's that.
"There’s nothing to fear but fear itself and maybe some mild to moderate jellification of bones." Cave Johnson, Portal 2.

The pool in front of the School of Sorcery is actually supposed to be a teleporter to the arena so you don't have to sit and wait 5 weeks when you get the Champion promotion. It's really convenient. It probably sent you to Harmondale because the stables aren't open yet.

To get the stables open you must:
1) Have the quest
2) Activate the three torches
3) Go to the southwest part of Harmondale on the hill south of the westernmost torch
4) Save your game
5) Reload the game you just saved
6) Kill and loot the named Goblin.

The problem is that quest in the base game is only triggered on a map refresh after the torches are lit. The easiest way to do this is save and reload.
Top

Arret wrote:The pool in front of the School of Sorcery is actually supposed to be a teleporter to the arena so you don't have to sit and wait 5 weeks when you get the Champion promotion. It's really convenient. It probably sent you to Harmondale because the stables aren't open yet.

I was sent to the Arena all right, but I went straight to Harmondale asap, because I was just in the middle of something. I didn't know that should happen, haven't read anywhere that place would teleport me away. It is convenient, although I wasn't expecting all the same.

I'll see if I can get that corral quest done. Thanks for the tip.
"There’s nothing to fear but fear itself and maybe some mild to moderate jellification of bones." Cave Johnson, Portal 2.

Users browsing this forum: No registered users and 16 guests