The role-playing games (I-X) that started it all and the various spin-offs (including Dark Messiah).
Post Reply
First unread post • 6 posts • Page 1 of 1

The point is to replace that guys on mine ones: 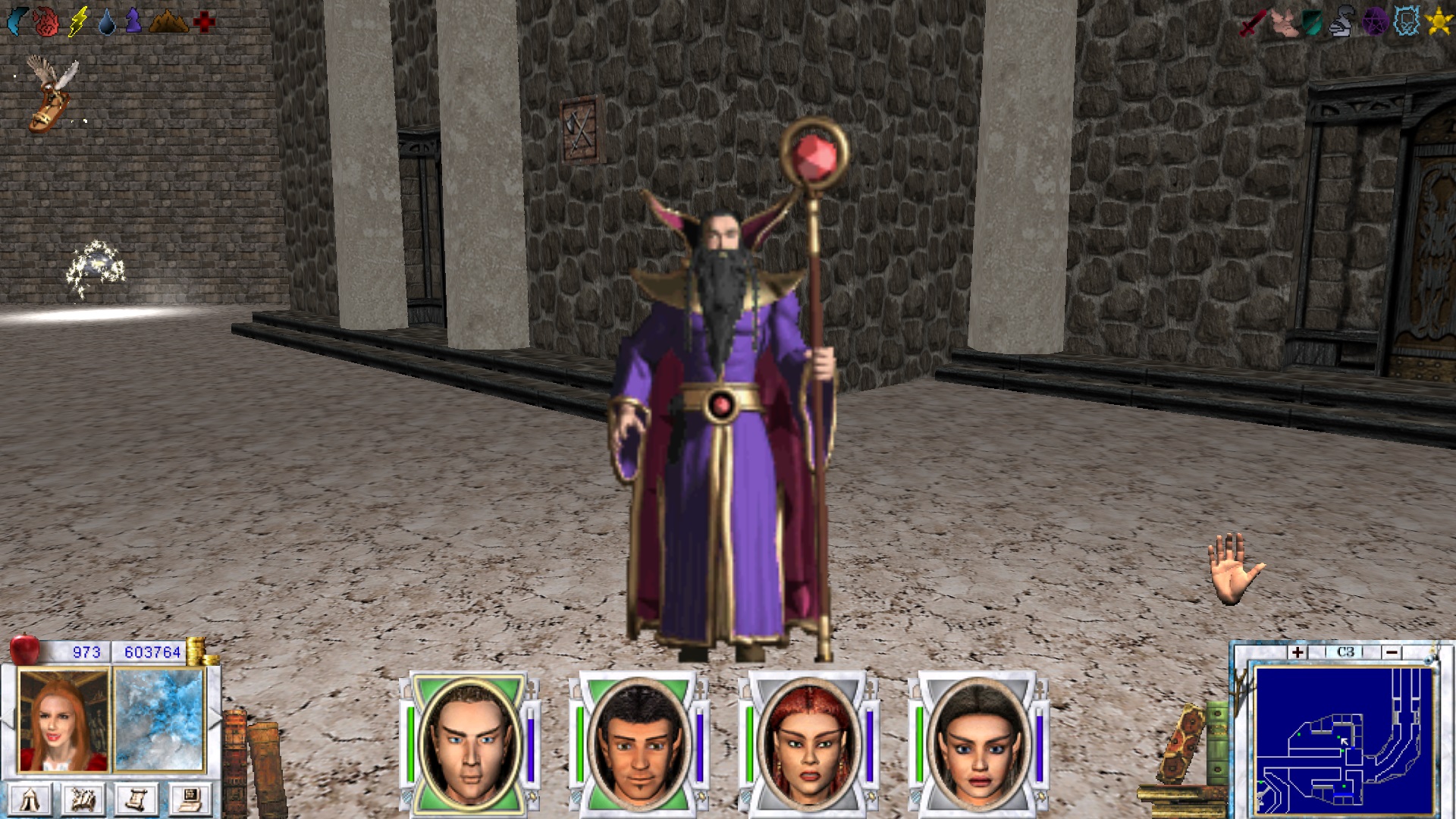 1) You will need an MM game with patches and modding tools from Grayface (his site: https://grayface.github.io/mm/) 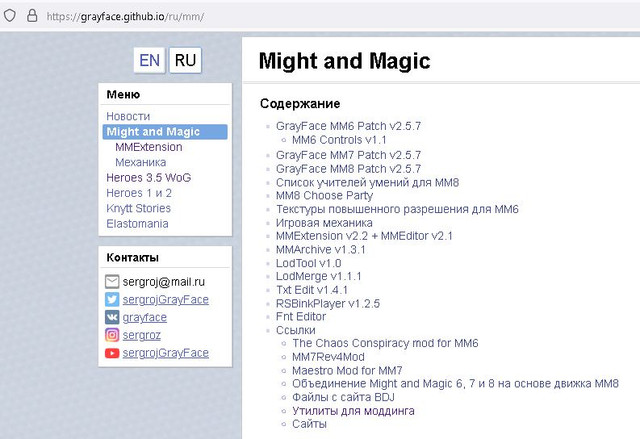 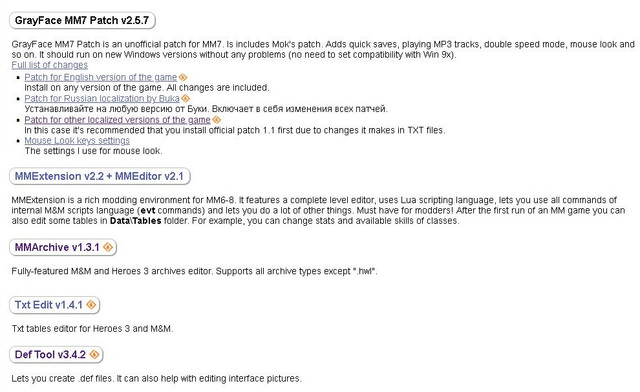 Also you will need those little programms:

Dowload them in archive here:

you can do whatever you want but I found that names like (m1a_ - fits for 0 degrees, M1b_ - for 45? m1c, m1d, m1e vice versa)
it will be much more easier for importing them with such names just get it in mind

Open PngToBmp.exe and simpl Drag-and-Drop Your rendered PNGs onto it with no changes.

Random - controll Pixel Dither effect on transparent objects, sometimes allow to create interesting magic effects
Alpha Cuttoff - controll how much Alpha channel will be cutted. Higher number - more Alpha will be cutted (0-256) sometimes you probably will meet gray contour at the edge of your model and increasing that number will help you to beat it (200 solves it almost all the way but try to stay at 50 for the first time)

now go to your created folder wth newly generated BMPs and test if there are NO GRAY contour on sprites! (gray could apper on a few sprites, not enite ones at all!!! pay attension to it)
in my case there is allright and no any gray, ya-hoo! 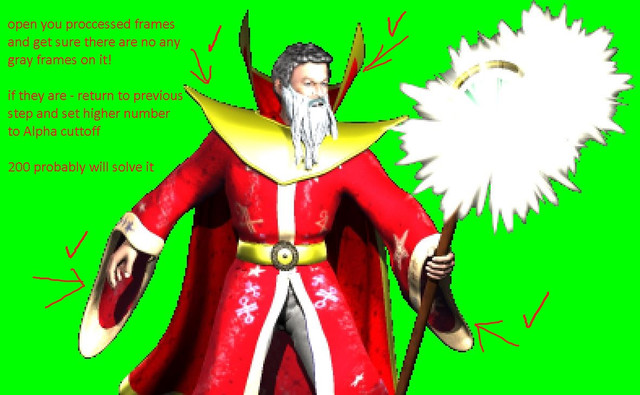 PNGfix Render - is an optional tool. in some cases it could help to fix PNG unproccessed files and try to delete failed pixel that cause to gray frames appers. just simple drag-and-drop PNS onto it if it needed (STRONGLY RECOMEND to BACKUP your render before you made any operations with them)

now its time to work with DEFTool!
Open it and firstly - change option into SPELLS! 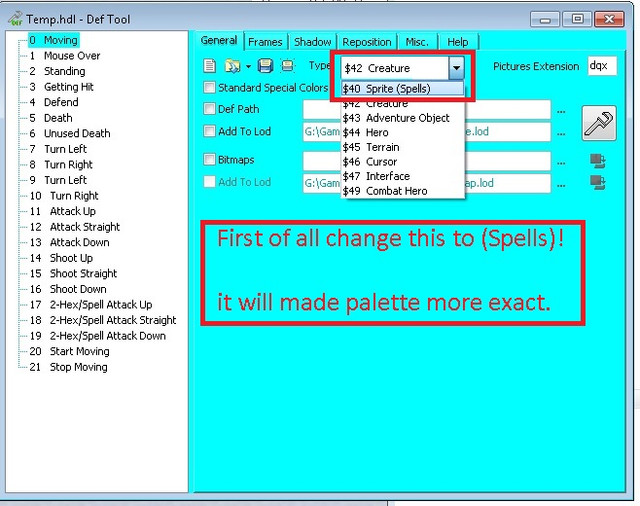 than go to second TAB and locate your BMPs, CTRL+A ENTER to add all of them to animation window.
Do not forget to click on a CYAN color (transparancy color) - it will changed to green one or the main color of you image 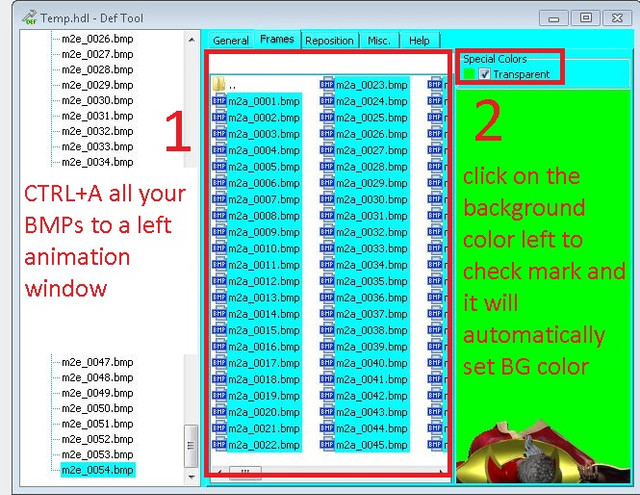 now back to the first TAB
1 - save HDL file (it will hold all the frames of animation (you can delete it later after work will be done.
2 - check the path
3 - click EXACTLY that button to create 256-forman sprites with a single palettes!!! 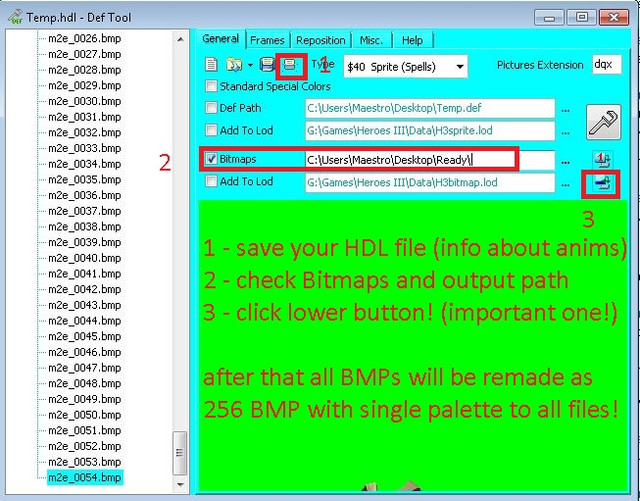 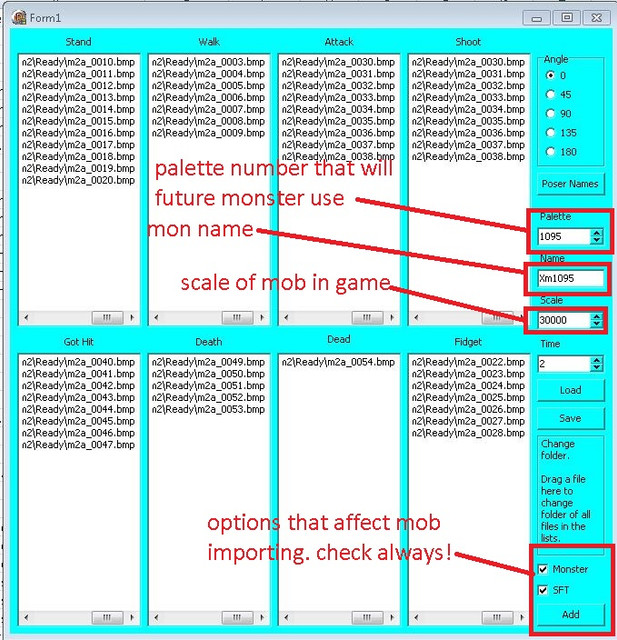 Animations:
Stand - standing still (in my version i've added little movement to immitate breathing heroes3-style. (flyers will use it to float at place so keep it in mind)
Walk - walking animation (flyers could have the same as stand animation or new ones)
Attack - simple attack
Shoot - this is the same as attack but shooters use this kind of animation (medusa, beholder, archer etc. you can keep it the same as attack animation
Got Hit - when you hit a mob this animation is palyed. not a deadly one, just a hit
Death - animation is playes as a mob is killed. but without the last one frame, corpse!
Dead - corpce lying on the ground. could be animated if you wish but i see no point of doinf that. could be interesting in few situations i guess.
Fidget - animation that used for "funny action" and casting spells. it must be done! do not let this window empty or errors will occur inside game while right-clicking on a mob!

you must do it for each 45 turn!!! remember the section where i recomended you how to NAME MOBS? m1a m1b m1c...? in that case you can just click on "Pose names" and program will add another rotations automatically! drastical economy of time

pay attension to a palette number!!! It's MUSTHAVE! keep just a number of it! 1095 in my example.
mon name - just a name of your mob's files. Do not give complicated or long names!!! 8 symbols are enough! I've just added X (eXpansion) and name of palette!

cheack SFT + MONLIST and ADD, navigate to your MM folder/Data/Tables and select SFT file there.
it's almost done! 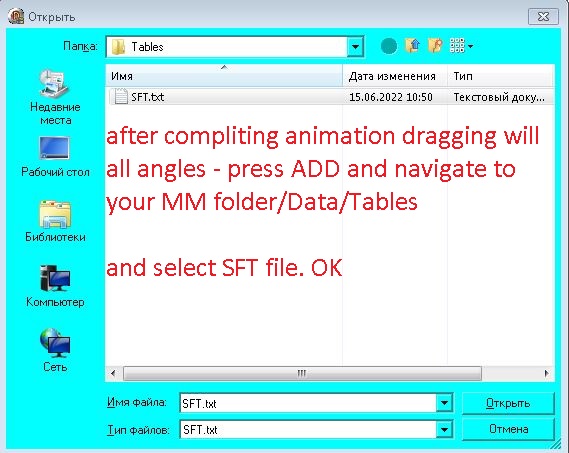 now copy and rename any 1 file from the RENAMED folder as swhown below to create a palette for the game: 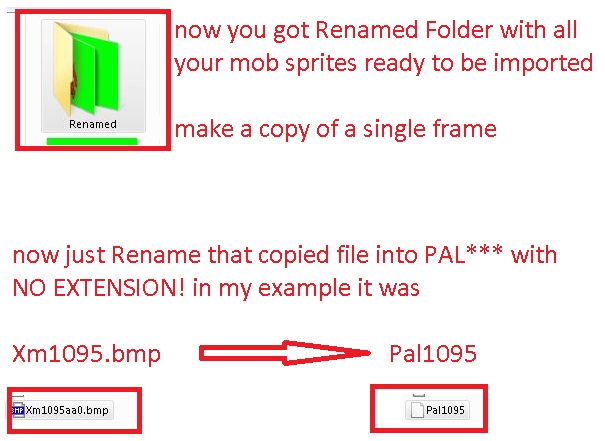 open with MMArchive BITMAPS.LOD and drag you palette file there 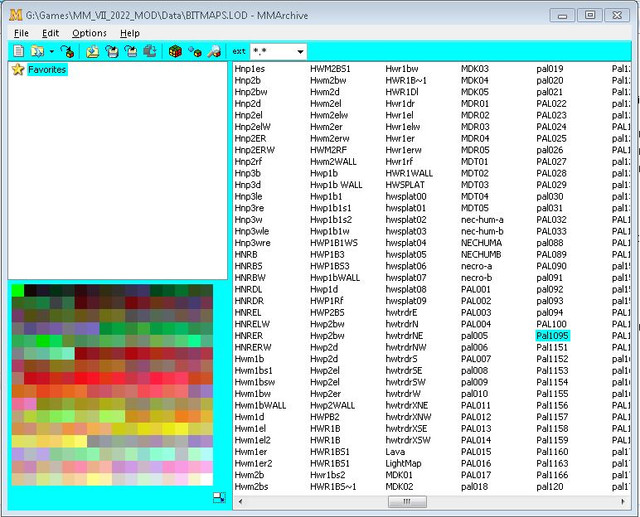 now opet SPRITES.LOD and if you did everything right - drag sprites from RENAMED folder.

if no errors occures sprites will be added! 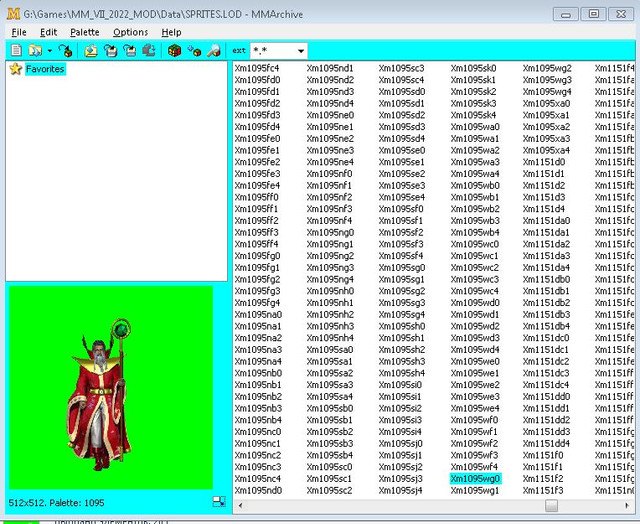 one more step left:
you need to edit MonList.TXT in data/tables
just go at the bottom of a list, find 8 last entries and copy them to desired mod

save file and start a game. game will require some time to read and import new data so take a pation alittle bit.
go to a place where mob is living and see the result:
you are marvelous!!! 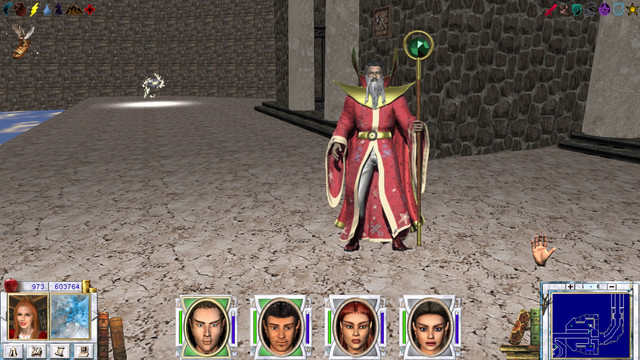 you can face wrong scaling and mob looks too big or too small! you can fix it inside SFT.TXT file by replacing scale number to new ones 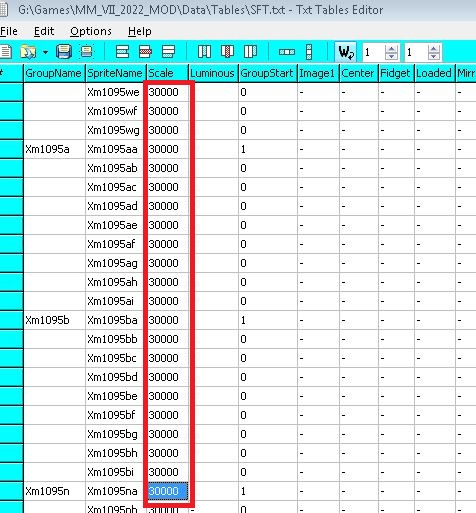 You can contact me here:
maestro_mod@yahoo.com
vladud @ yandex.ru - preferred one
---
Site about MODs: http://www.mmgames.ru
---
if you wish to upload some materials for this site - let me know.
Top

Thank you for posting this amazing tutorial! It's of no use to me personally, just because I am a total noob when it comes to graphics (I'm mainly programmer), but others might find it useful! Thanks for dedicating your time to help fellow modders.
Top

Glad to see you active here again! Now if drawing them were just as easy. -_-
Top

we will think about it but for better effect i recommend use slow photoshop method for now. DefTool (curent version) is fast but no so pixel accurate. i guess this is a problem of big sprites cause DefTool was founded for Heroes3 with it's small images. 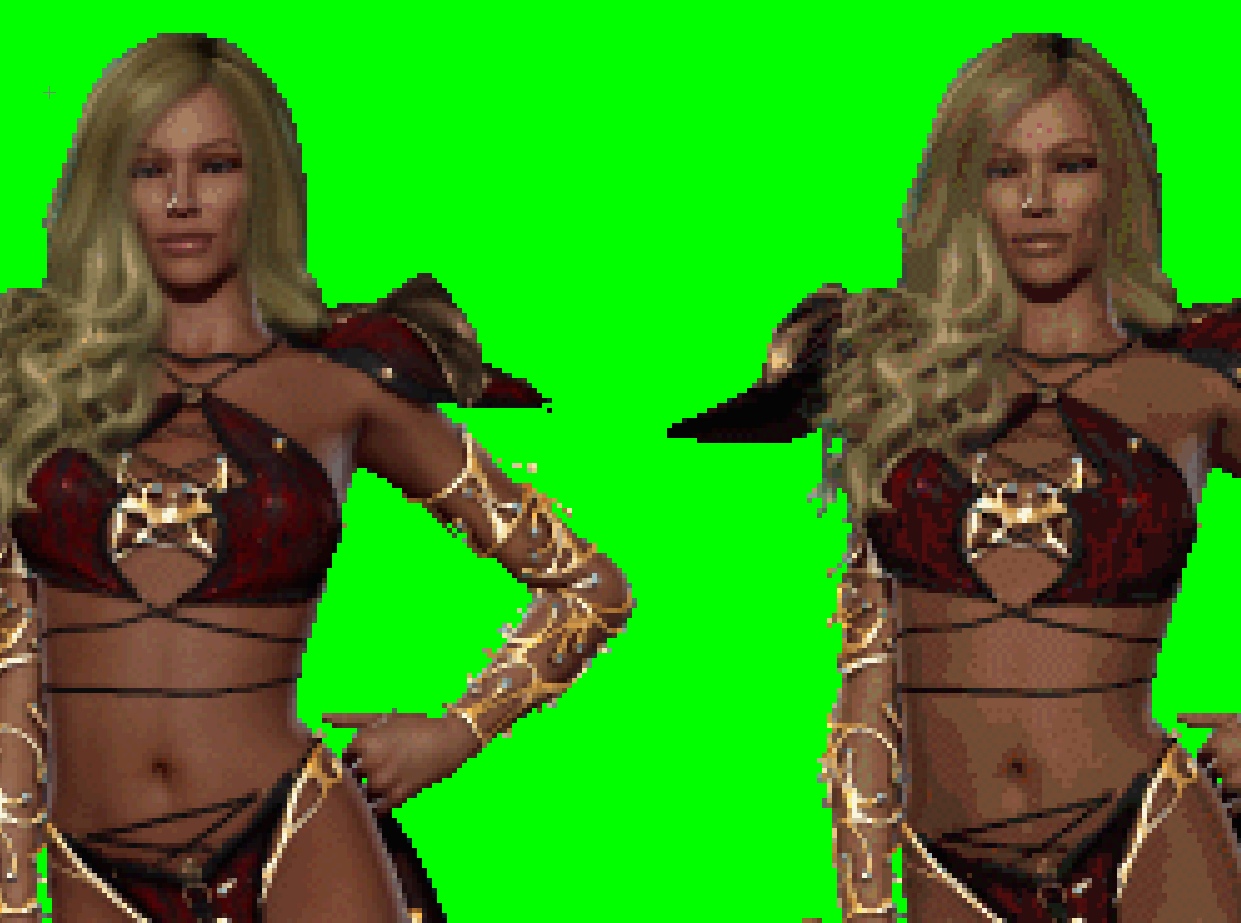 You can contact me here:
maestro_mod@yahoo.com
vladud @ yandex.ru - preferred one
---
Site about MODs: http://www.mmgames.ru
---
if you wish to upload some materials for this site - let me know.
Top

Looks like IrfanView is even doing it slightly better than PhotoShop. Now recommended process is (very briefly):
Use DefTool2 to combine images, then IrfanView to convert to 8 bit, then Alt+Tab back to DefTool2 and Split it.
My patches: MM6 MM7 MM8. MMExtension. Tools. Also, I love Knytt Stories and Knytt Underground. I'm also known as sergroj.
Top

Thank you for publishing this great tutorial. I think it will help those who are into it. Personally, it's useless because I like to play games more than I like to create. Even if I encounter difficulties in the game, I simplify my life and use game hack forums. I believe there is no need to spend a huge amount of time on games because they are not beneficial. And modern games cause stress, aggression, and nervous breakdowns. I value my health and wish you the same. Keep updating this thread. Good luck with that. You do really useful things.
Top
Post Reply
6 posts • Page 1 of 1

Users browsing this forum: No registered users and 21 guests