Hello. I am new too all of this. about to start my first mm merge playthrough. Wanting to start in Enroth but eventually have a Dark elf in the party.. If I take a peasant class to Jadame and turn them into a Darkelf, is there someone who can then teach the base Dark elf ability?
Top

How does the character creation unlocker work after you download it?
Top

Roxterat wrote:Anyone know where to find snow effect sprites in files of mm6 (with grayface mod)? I just looked everywhere ^^

Why would it be a sprite and not particles?
Dyson Leland is a good evil effective priest!
The key to cross-timeline travel is casting Town Portal at a High Magic Spot.
Top

Roxterat wrote:Anyone know where to find snow effect sprites in files of mm6 (with grayface mod)? I just looked everywhere ^^

Why would it be a sprite and not particles?

Would there be a way to just have M&M 6 in the M&M 8 engine with out the merging? What would you have to do to make that?
Top

Hi, amazing mod. I have a question regarding the zombie race - if I want to have a zombie (ghost) dragon (with a vampire class) in my party, do I have to make one using the unlocker, or can I make a regular dragon (with a vampire class) a zombify him later in the game? Would he keep his dragon racial skill levels this way (e.g. a regular vampire dragon can reach GM in the dragon skill, a zombie/ghost vampire dragon can reach only E in the dragon skill)? I just really like the idea of a vampire dragon with the ghost aesthetics. Thank you very much!
Top

Zoltan wrote:Would there be a way to just have M&M 6 in the M&M 8 engine with out the merging? What would you have to do to make that?

Modders would probably have to disable all the events that aren't related to MM6, that would include disabling the new game continent pick, changing Town Portal values so it doesn't show the other continents, disabling Verdant altogether, disabling all the non MM6 characters from the creation screen, etc.

It would need to be something like modding the merge mod in on itself. And even then it wouldn't be a faithful replication of MM6, because it would still be missing spells (Guardian Angel, Fire Blast, Dark Containment, etc.) and the voice lines are all over the place, for example pressing "Y" to yell, the MM6 characters throw their greeting speech (hey you!) instead of the yell they do in MM6.

I think your best bet in the current scenario is to play the Merge as is starting from Enroth continent and just ignoring everything related to the other games and merge itself (Verdant quests).
Last edited by joanthedark on Apr 18 2021, 21:58, edited 1 time in total.
https://www.youtube.com/watch?v=Y9-2KexBrzA
Top

Dear Mr. Rodril, or whoever created merge mode,
I stopped playing games 12years ago, because I was too addicted to it. Nothing got me back, but when I read about merge from the youtuber Sssseth, I immidiately installed it and played it for days straight.
I would like to sincirelly thank you, I consider all might and magic games a peak (unfinished 9th volume is wonderfull too), I couldn't imagine it could be better, but you did it. Hats down to you. You litteraly fullfilled my dreams, when I could step with my group of heroes fo Jadame into the other continents. I was imagining it, but never thought I would ever see it in my life.
The map of the breach litteraly took my breath, when I lost all my party members (always played as a Priest of the sun) and I had to deal with the creatures on 200% difficulty. I always saw mam6 as the most inventive in it's mechanics, but it is nothing to be compared with what you did with the dark area map. This game had and still has a big potential that could be done.

Though I only wanted to thank you, seeing everybody with thousands suggestions for changes, I would like to humbly add my two.
1: Divine intervention (my all time favorite spell) had always weak presentation. I thought, if the animation effect of turn undead could be added? The souldrinker has the same effect but with darkening, could divine intervention have the lightening from the spell turn undead?
2: The last map misses a big boss fight. I doubt the spare darkness would give up after answering a few questions. After the question I would prefer also a big fight with a monster as big as the map itself, maybe black "Nightmare" (from plane between planes) 100x taller and with 100 000hp.
But those are just suggestions.

In the Castle Ironfist Arena I fight peasants when I should be fighting monsters and of course that destroys my reputation and the guards attack me there is also no pick up sound for anything for the Merge Mod I am playing.
Last edited by Zoltan on Apr 20 2021, 15:39, edited 1 time in total.
Top

I mean I like global install, improved graphics and fixed bugs.
But I don't want new dificulty settings and class/race changes.

I like to play parts 6,7 and 8 in this order with all bonuses contained in this merged install package.

You can't outright prevent the difficulty changes, but they are (sort of) modifiable from the options menu by setting the Bolster something-or-other down to a lower percentage (I set it to 5% to get the expanded spells and AI, but setting it to 0% disables it entirely - keep in mind that the effects won't take effect until you load a newly-spawned area, so if you do this as the very first thing you do in MM6 you still have the Bolster Effects applied to overland New Sorpigal)

The new quests are not entirely unobtrusive - the quest hook is forced upon you and is also how the characters learn about hopping across timelines - but it is also completely non-urgent. You can go ahead and do all the other everything before helping Verdant with her problems (Merge considers the conclusion to Verdant's quest as the conclusion to the entire game, Verdant's quest can't be concluded until the three main stories are resolved anyway so it is 100% not urgent)
Last edited by raekuul on Apr 21 2021, 12:21, edited 2 times in total.
Dyson Leland is a good evil effective priest!
The key to cross-timeline travel is casting Town Portal at a High Magic Spot.
Top

Thank you for info.

ANd what about this: 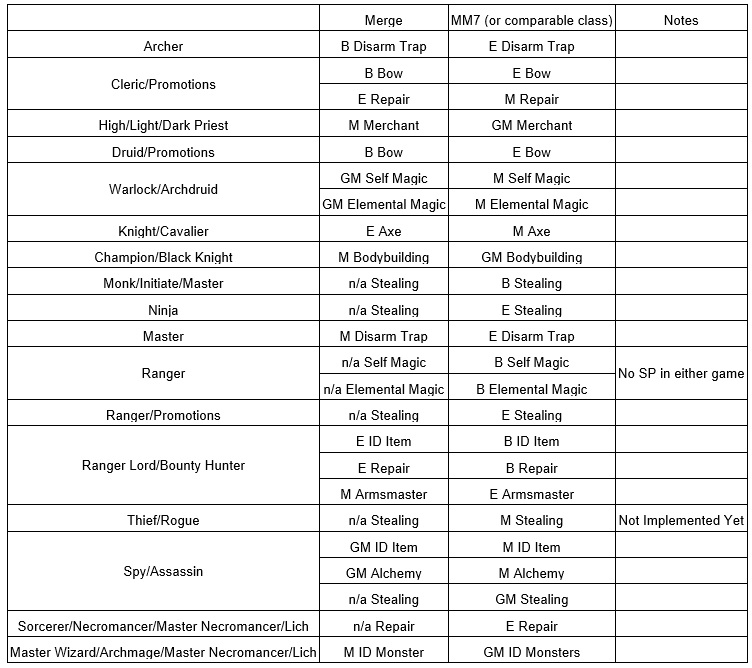 It can be reverted?
Don't get me wrong. I like you did with MMx but I prefer graphic and QoL changes. Otherside i 'hate' 'core' rules changes.
Top

Zoltan wrote:In the Castle Ironfist Arena I fight peasants when I should be fighting monsters and of course that destroys my reputation and the guards attack me

Zoltan wrote:In the Castle Ironfist Arena I fight peasants when I should be fighting monsters and of course that destroys my reputation and the guards attack me

Yes thank you but does this go into one of your scripts files? The enemies seem easier to kill with the Merge Mod can I change this?(Bolster).I just have the regular Merge Mod no patches mods or updates.
Last edited by Zoltan on Apr 21 2021, 23:59, edited 2 times in total.
Top

ANd what about this:

It can be reverted?
Don't get me wrong. I like you did with MMx but I prefer graphic and QoL changes. Otherside i 'hate' 'core' rules changes.

It's possible to change that by editing Class Skills.txt in Might and Magic 8\Data\Tables, with the exception of the lost Stealing skill.
Top

Question about spells in Merged version of game.

Is there table where are stored spell names by class and required level (BEMG)?
Top

Me and my best friend started playing mm merge about a month ago. After finishing the Lair of the Wolf in mm6 Blackshire region, all of a sudden we can't jump or cast fly properly. No vertical movement allowed. Tried reloading previous saves...only to find the same effect. Tried keeping the save game.files and re downloading mm merge. Still f***ed. Can anyone help????
Last edited by Dashwell4 on Apr 25 2021, 22:51, edited 1 time in total.
Top