Re: Map of the World of Enroth

Avonu wrote:From these texts I suspect there are plenty of islands between Enroth and Antagarich, one of those we visited during sir CHristian AB campaign.

Well, there's Regna, and the Dagger Wound Islands. Might be some more islands to the south of Regna, though.

I've always imagined Jadame as being rather small, since we hear so little about it. Hmm.
Might and Magic playthroughs on my YouTube channel
My website
Top

The problem is, that Regnan Islands starts 200 miles to East of Enroth. Regna and Dagger Wound Islands are much, much futher. Besides you have these "petty kingdoms and tribes" on them. Ifen when we count Bootlag Bay islands, Karigor and MM8 islands, that still seems to be much lower number then suggested by these texts.
Also, sir Christian moved from one of such archipelagoes and kingdoms to other with each map and ended eventually near western coast of Antagarich.
Top

Looking good, Katarn. I'll review it later for accuracy, but on first glance, it looks well off! I've updated the main post with it, so it is easier to find.

As for the islands, it is definitely suggested that there are many many more.

Map of the World of Enroth Revised

Asomath wrote:Looking good, Katarn. I'll review it later for accuracy, but on first glance, it looks well off! I've updated the main post with it, so it is easier to find.

That's very nice of you, thanks!

I've replaced the old map with a new, revised version. Many, many landmarks were added, lands were revamped to fit more closely to their in-game visage, there was some continents and islands rearranging and more. Endless Ocean is less endless now, but judging from the MM6 intro, there's not so much space between the continents.

What caught my attention were enrothian roads. As for the one leading to Agar's laboratory through a frozen wasteland, it's a bit of a stretch, I guess. But who knows, maybe someone was attending to it, so it's not hidden beneath the snow. On the other hand, road leading to Abdul's desert resort straight through the Dragonsands was too much and I've decided to not place it on a map. As those roads are pre-silence, the desert part would have to survive the Day of Fire, years of abandonment and tons of sand. When you come to think of it, from what exactly the Ancients produced them

. Carator Mountains were placed to the south of Free Haven, close to Darkmoor. As they were supposed to be south from the initial battles of the Succesion Wars and in some distance from the dwarven domain, it seemed to be the best location for them.

Asomath wrote:As for the islands, it is definitely suggested that there are many many more.

Yep, there's no doubt there should be a lot more islands here and there on the Endless Ocean, yet we know virtually nothing about their exact location, shape and name. I've decided to add only those islands about which we have at least symbolical knowledge. Thanks to that the map is, hopefully, venturing less into the fanon territory

So, here's the revised map: 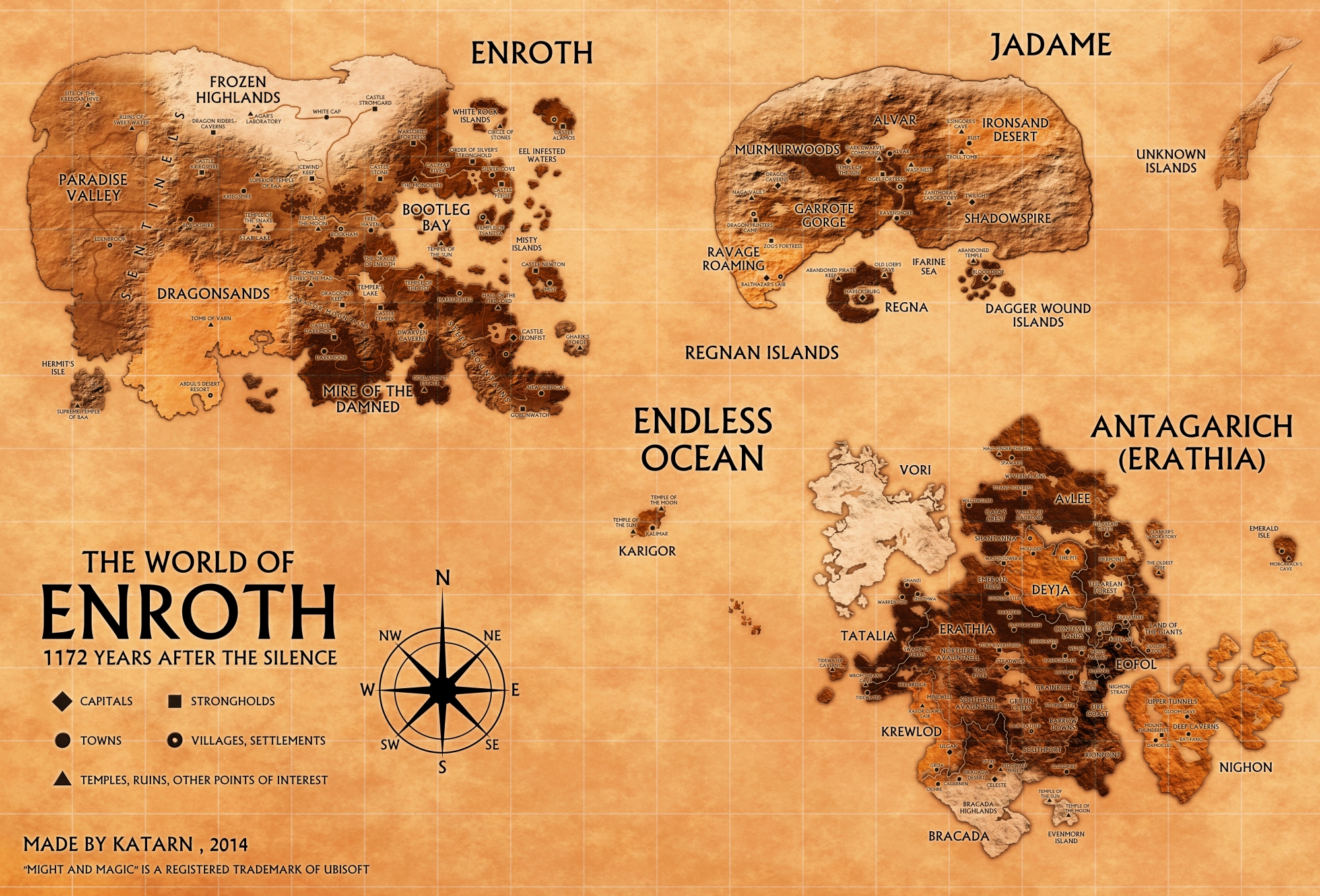 If you don't want to draw the islands, you could add a black blob around Karigor and label it "Here be dragons"

Nice looking map! i don't really know what it presents x) but somehow it makes me want some coffee... but well stitched... i don't really much follow storylines in games...
but i'm come to conclusion that there must been eclipse in this game.... hmmm.... must been cloudy day cause i havent seen it... usually i just watch those cutscenes and intros that im bit hang of whats happening there...
i liked this old maps they have own kind of awesomeness in it... i never played this old M&M games but i see people selling this on yard sales sometimes maybe i need to pick one with me just for fun x)...
hmmm... someday Avonu understands all the wisdom of Slayer of Cliffracers and joins hes clan of Cliffracers x)
Top

This is my version world map: 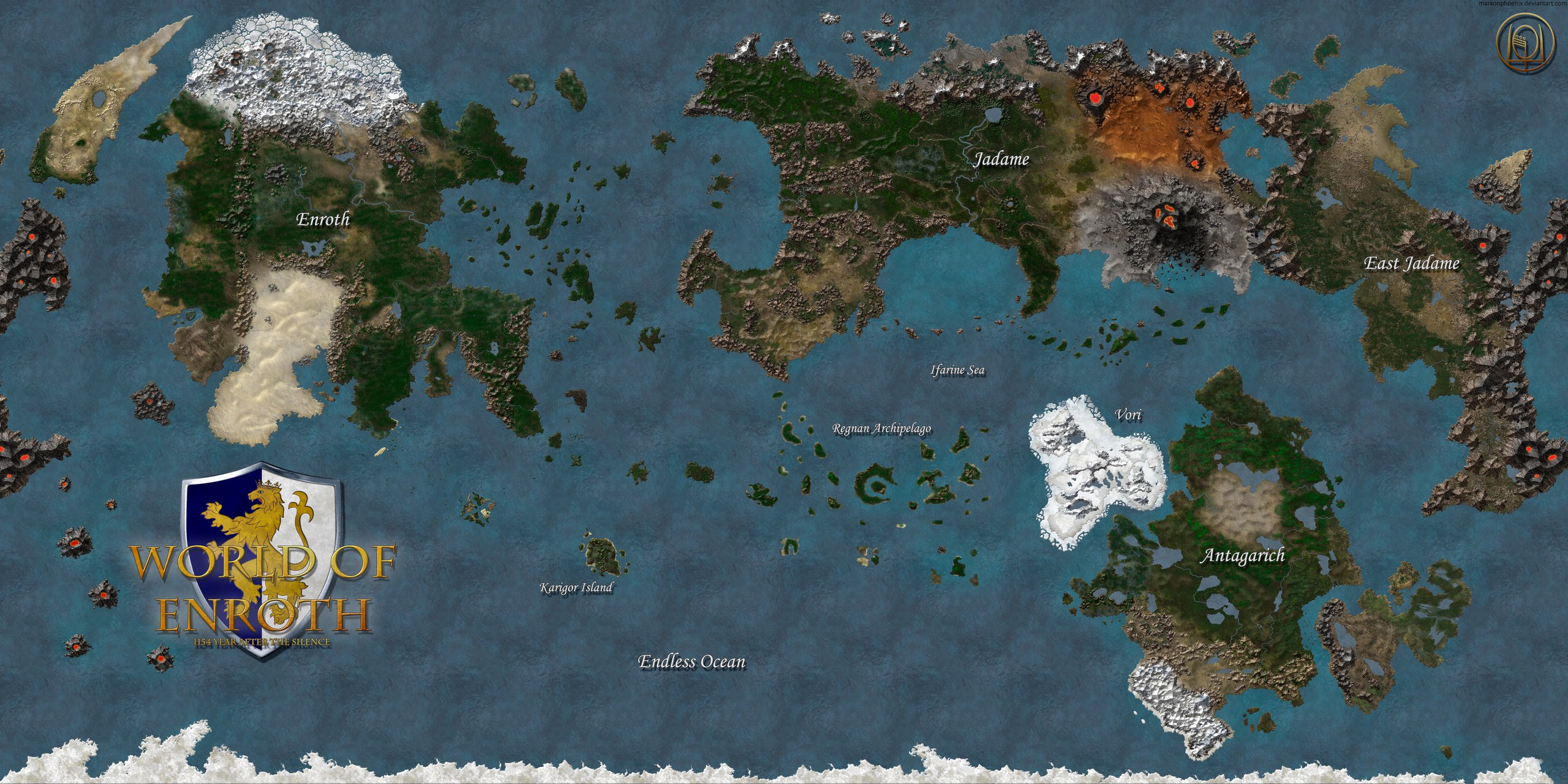 Thank you for all the information that I have found here. I thought it was very helpful.
Top

hey nice one mate that looks awesome, I am curious where you got the Jadame and the islands and all that lol
Top

Erwinner wrote:hey nice one mate that looks awesome, I am curious where you got the Jadame and the islands and all that lol

Sweet looking map!... now Slayer of Cliffracer and Avonu can live happily ever after in this islands...
hmm... priest in their wedding ceremony probably gonna be some Hellboy character...
they could just ask JVC when there was opportunity than arguing in forum...
But nice map i dont know why that Vori place has winter i mean if theres summer everywhere can't you just describe as summer...
"if there was winter in story it probably doesn't mean theres winter all the time"....
Top

@overall: the ice is caused by the Sword of Frost.
You'd think Darkmoor was a ghost town, but instead there's plenty of life among the dead.
Top

Hey, Markon! I like it quite a lot. I have updated the main post with it. Though I am pretty sure somewhere it says that Enroth is the largest continent of them all...