I think 8 weeks travel is a way close to Jadame (after all Ravenshore is a harbour city which exist by doing merchant). 6 week travel is way near Regan Isle.
3 weeks travel is doing by straight line though Regnan Isle - but no-one is insane to do that.

Isnt the Crescent Isle we encountered in MMVIII Regnan isle? Or was that just an outpost?
Top

BTW - these lands on the East on your map are incorrect - see why. I think it's another (not known and never visited) continent.

The Isles are correct, but are not quite perfect:

You are correct though, there is a landmass beyond the Isles, and as such, some sort of land east of Jadame.

I am not so sure about the 8 weeks journey stopping in Jadame. Regna Isle is positioned so it can serve as a way to intercept Merchant ships. It is unlikely that the Ironfists would move into and away from such dangerous territory.

Xanathor states that the 6-week journey is risky because it passes "dangerously south of Regnan Isle."

Im not sure what the Master of Water was talking about. Perhaps he was talking aout departing from Hermits Isle, or somewhere on the west coast of Enroth, or maybe he was using effective spells like Lloyds beacon, or maybe he can speed up the sailing speed of the ship by moving the water around them.

Asomath wrote:Where did we get the Huge Mass above Enroth?

He may be talking about the Heroes III map "The Mandate of Heaven" from Restoration of Erathia, which shows a gigantic arctic continent to Enroth's north and a huge swampy landmass to the south. But I don't think it's canon since it doesn't correspond to the MM6 intro video. (There is a mass above Enroth but it's not all that big)
Top

Hey, so I used to wayback machine to look at the Nether God website Corlagon... how much of the stuff on there is Canon. Obviously I pulled Xanathors description of the travel times to Erathia from there.... is that official?

We have a consensus (or at least, I believe as such) that all of the lore-related replicated material on Nether Gods is official, even including those weird Dannil Darvin posts and the one talking about nukes.

I wasn't there back in the day, but I'm 99% sure they were written by NWC and posted by 3DO's webmasters.
Top

Kk, good to know. Any comments on the position and size of continents on this map from your point of view?

What's the URL to the Nether Gods site?

It looks like we'll never know everything about Enroth since there's so much missing information...
Top

Avonu wrote:Just ignore anything what Slayer of Cliffracers posts - he lives in his own world where none fact from games are true against his theories.

. Shall I report you for making personal attacks or should I let it slip?

It is not a crazy theory, it is a *fact from the games* that Queen Catherine lands in the South-East of Antagarich. Given she then departs to Bracada, this suggests a north-eastern approach.

-Jadame's southern coast is so close to the South Pole, while all of the islands you visit are tropical?

-Why is Vori down there and Nighon up there?

-You have Catherine landing and departing from Dragonsand?

-The usual port is from Castle Ironfist, above the bootleg you drew in Enroth. Departing from there, with your proximity, would take at most 2 weeks to get to Bracada.

To Others: Did I get the size of Antagarich to Enroth right?

I am indeed rather out of my depth here I will admit, I'm just working on what I know which isn't that much.

2. Vori is really cold I think, that's why it is near the south pole.

3. I don't claim to know where she departed from.

4. Again I am completely clueless. The point of the map was simply to visually demonstrate the basic concept I was trying to suggest, not to depict the world accurately at all.

Yes it is easy to get to Bracada, Queen Catherine doesn't go there because that would involve having to sail a fleet past the Regnan's. Normally though the Regnan's prey on that westwards trade.
Last edited by Slayer of Cliffracers on Dec 11 2011, 16:52, edited 1 time in total.
Working on tracking the locations of Heroes IV battles. Stage 6 of campaign map finished, all initial Heroes IV campaigns mapped.

It looks very accurate to me. Positioning is definitely correct if we agree on Nether Gods being right (just note that in MM8 they refer to Enroth as the lands across the eastern sea), and you know yourself that travel times are contradictory. But I'm not a special expert or anything. I can tell you much more about where the landmarks are situated, but, Avonu has probably scrutinised more of the bigger details on the world geography than myself.

I have begun to feel a little dubious about Antagarich being completely dwarfed by Enroth, even just considering the whole "feel" of Antagarich as being a much, much more bustling and expansive realm than all the others, but that is just my opinion and has nothing to do with canon (all sources - except the scale of MM6's playable gameworld compared to MM7 - suggest Enroth is indeed huge).
Last edited by Corlagon on Dec 13 2011, 20:39, edited 1 time in total.
Top

It looks like we'll never know everything about Enroth since there's so much missing information...

True, there was a lot unexplored, but if we can use whatever information was provided to us, we might at least be able to get a good chunk revealed.

@Slayer Its not so much personal attacks. It is fact that Catherine landed in Bracada, but some of your continent positioning seems to severely clash with common geographical knowledge.

@Corlagon alright thanks! We'll get to the smaller bits later (if you got names of towns, rivers and mountain ranges, stockpile 'em). We'll see if the other's listed come around and have their own bits of knowledge to share.

Asomath wrote:@Slayer Its not so much personal attacks. It is fact that Catherine landed in Bracada, but some of your continent positioning seems to severely clash with common geographical knowledge.
~Asomath

Avonu is engaging is personal attacks. I don't want to go back to how it was before but Avonu seems determined to do so.

Check out the original Heroes III campaign, Restoration of Eratia. What happens is that Queen Catherine's army lands in the South-East of Erathia and then Queen Catherine herself departs for Bracada leaving the army to look after itself. That is why you don't command Queen Catherine in the first campaign.

But if Queen Catherine already landed in Bracada, then she would have already enlisted the Bracadans and there would be no reason why she would not be available for that campaign.
Working on tracking the locations of Heroes IV battles. Stage 6 of campaign map finished, all initial Heroes IV campaigns mapped.

On to Oceans. From what I understand by the Antagarich map, this is the position of oceans? (I also put the Island Names on there)

For those of you who may be wondering, I'm working in an 8000x3500 Adobe Photoshop file, at 300 PPI. In theory, when its done you should be able to see the markings of cities and towns when zoomed in.

Asomath wrote:On to Oceans. From what I understand by the Antagarich map, this is the position of oceans? (I also put the Island Names on there)

Isn't Antagarich squiffy on your map? Shouldn't the bottom of it be flatter although Nighon is in the right place? The bottom 'boot' needs to exist but be straightened out a bit towards the west.

But otherwise that map pretty well addresses my point. Now the shortest route to Erathia from Enroth is from the north-east, which avoiding Nighon and the mysterious north of that continent brings you to the south-east of Erathia.
Working on tracking the locations of Heroes IV battles. Stage 6 of campaign map finished, all initial Heroes IV campaigns mapped. 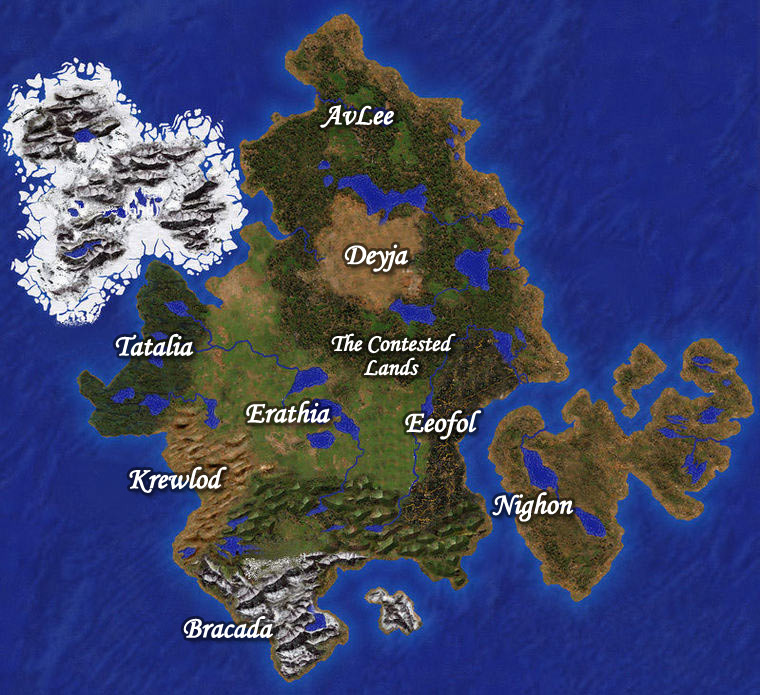 @Asomath
Dagger Wound Islands were close to Jadame - they were connected to mainland with bridges destroyed later by volcano eruption.
Also I don't think White Ocean is close to Enroth - it's more Endless Ocean there.
White Ocean is on South of Nighon and I think it "antarctic" waters (because of it's name). Enroth lies mostly on northern hemisphere.

BTW - here are some Regnan Isle from AB campaign. Althrough there are meny islands, archipelagos and kingdoms between Enroth and Antagarich.

That would make sense. Ill make those changes!

And Nice! More Islands! Any specifics as towards their locations? Are they closer to Antagarich or Enroth?