Steam Summer Sale 2022
55 minutes ago by theresamurray (2 replies)
in News
I am a person who loves to play games, especially interesting games modded apk for android version at...

Might & Magic: Heroes VII → Haven → A Feast for the Gods

You continue from the previous map; Tomas now has to consolidate his position from Hammer Fall and build his own country away from the empire. Start out by talking to your councillors around you. Talking to Ella gives you some great artefacts. Also flag the mine and pick up resources around. Then talk to Serguei to send him packing.

This map is a classic big Heroes map with lots of enemy heroes and towns. Head down the stairs and start picking up stuff. Standard prcedure: build towns, flag mines, explore and fight creatures. When travelling around on the plains, an enemy hero named Orna will turn up from the north to kill you. The audacity! She seems to go for the nearest town (Blackforge), so take your strongest hero, give him your troops and go kill her. The enemy army is not very big, but she does have 10 seraphs, so don't take it too lightly. Winning is worth 30.000 exp. Another hero is coming the same path and then another via the sea to the east, so be ready for more fights. I counted three enemy heroes coming, after that it seemed peaceful.

There are several dwellings to the northeast, those can boost your armies. Also take note of the Merchant nearby, selling and buying artefacts. The road to the north is blocked by an avalanche, so just setlle for taking control of the mines and levelling up your heroes. 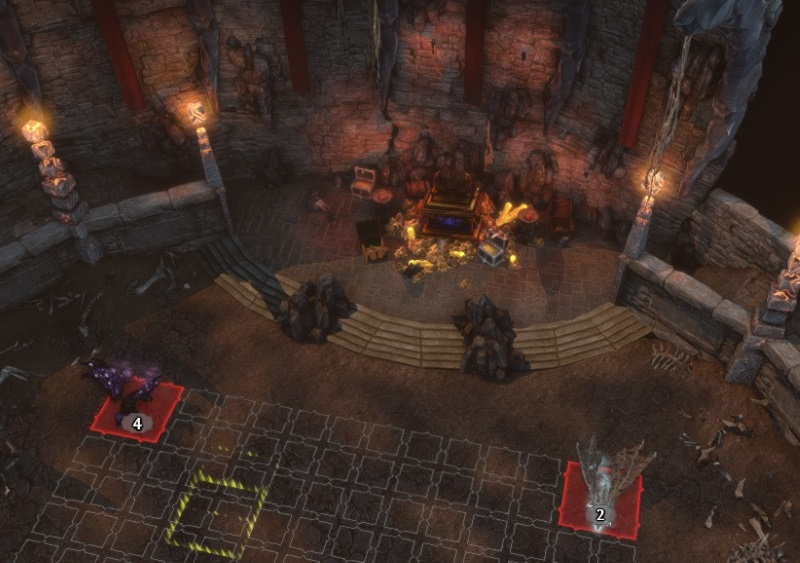 When you have control over the western area, it's time to cross the bridge by the orc settlement. Turn left after the bridge, clear the area and head into the underground for more loot. There's also an obelisk there, one of nine. The only thing in the underground you can't do without a huge army is the Shantiri Ruins. The Dragon Utopia is easier. When the underground is clear, head back up and go right. Head down the other underground entrance and you will find both an Elemental Conflux and a level-up shrine, the latter becoming all the more valuable at such high levels. You might also find some enemy heroes down here, but they don't seem too much of a challenge. Heading east, there is an exit taking you to a small island with an obelisk and stuff to fight for. Further north, you will find stairs to the surface and when you reach it you find an enemy town called Oakmoor. Capture it.

As is customary with Heroes games, the AI has not cleared its area completely. Speed is of the essence here, so don't plunder the mines since that depletes your movement points. Just to the west of Oakmoor is another town called Whitesand Creek. Take that as well and those roaming heroes should soon think twice about invading your lands and consider defending their own instead. To the south is an obelisk as well as much goodies to collect; keep clearing the area and try to consolidate your position. Between the two newly captured town is a Trading Post that can be useful. To the southwest is a bridge leading back to your own lands; I encountered no less than five enemy heroes there. This is becoming annyoing. I killed some, but some ran away to the west. Follow and you'll see why: there's a two-way portal there, allowing them to be annoying in several places. Go after them and fight them one after another. Eventually, you will find a town. Take it. That will surely put a dent in their hero recruitment. Just to the south is a fort you need to capture in order to cancel the enemy's area of control.

Losing all towns does something to the AI's mind; it becomes desperate to conquer any town and you should have guards posted at all towns to avoid sudden annoying recaptures. This while you hunt the last remaining forts and rogue heroes out there. Once you have eliminated them all (I stopped counting after ten), the Haven campaign ends. Tomas held his new lands free and independent from the empire. The lesson is for you to decipher.

Steam Summer Sale 2022
55 minutes ago by theresamurray (2 replies)
in News
I am a person who loves to play games, especially interesting games modded apk for android version at...