Tribes of the East → Will of Asha → Beasts and Bones

Our walkthrough writer maltz has completed the Will of Asha campaign series of articles, which you can access with the links below (the last two are new):

The To Honor our Fathers campaign is already under way. Thanks to all the Round Table members who share tips in the forums. There's nothing like getting a good advice when we are stuck on a nasty scenario.

Will of Asha
M4: Beasts and Bones

Finally, you start the mission with both Arantir and Ornella. Taste the power of Mentor and Pupil, of the Dark side! (*draw lightsabre* bzzz bzzz)

I know it is tempting to pick the 30 Ore bonus because you were always short of Ore in the previous missions - not here actually. There will be TWO Ore pits to flag within the first two weeks, but just ONE Saw Mill and not a lot of lumber to pick up from the floor. You actually need 30 Wood! If your heroes' builds are not very complete yet, consider the Mummy to get past the first few battles. 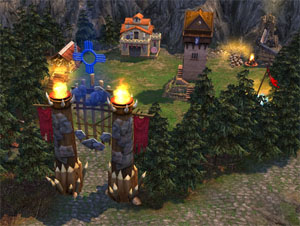 Arantir is a perfect solo hero with his Avatar of Death. He now quite resembles a Warlock, because all he needs is some "HP poll" units to stay alive. (Personally I use Phoenix here for easier battles though, because it is slightly cheaper and faster.) Give Arantir the Death's Embrance artifact set and anything that helps with magic (for me, it is the Ring of Sar-Issus, 1/2 mana cost). Load him with crap but durable units like Zombies and Ghosts to decimate everything!

Give all the rest, better creatures (especially Vampires) to Ornella. In my game I gave her Attack and Luck to become a better army leader. She should be able to handle enemy heroes as well.

Note: There have been a few reports that this mission cannot end even if the player has fulfilled all the requirements. For now, it is safer to do everything in one area, then move on to the next area.

You start in the SE corner, in front of town (A), with almost no army. This is your only base in the mission. First, send Arantir to flag the Sawmill and Ore Pit to the north, and Ornella to grab a little artifact in the back of your town. Then, use Ornella and her Vampires to remove the road-blocking dungeon stack at (1).

There will be a weak Orc hero charging you at (2). One single Curse of Netherworld is enough to send him packing. This spell has been improved quite significantly from past games and patches! You now have another objective - to "parley", or to have a chat with the Orc leader. The Orc leader actually has nothing to do with the Yellow player. You won't meet the leader until the end of this mission. 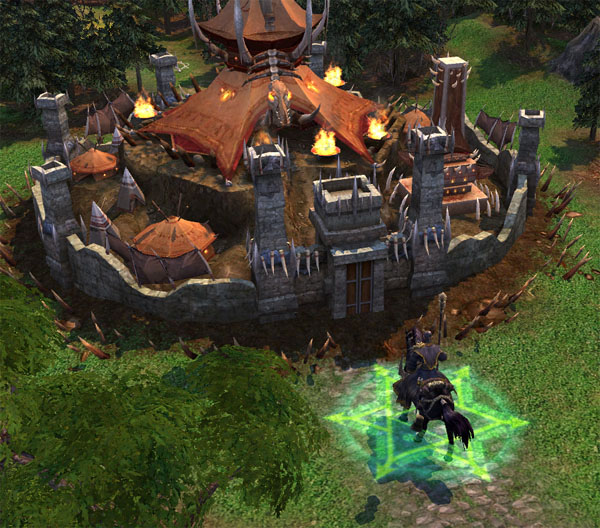 There are two narrow, long areas, marked with (3) and (4). Along these areas you can flag more mines and collect some extra stat points. At the end of (3) lies an one-way portal (I)-(I') to bring you back to the main path. I suggest sending Arantir to (3) (the tougher route) and Ornella to (4) first, and make them visit the other path immediately afterwards. There will be more Orc and Red Scout heroes coming, so Arantir is right that Ornella should stay nearby to protect the town. The Orc (yellow) hero will charge straight to your town, while the Red scouts are primarily interested in your mines. If you have the Town Portal spell it is very easy to defend the town. 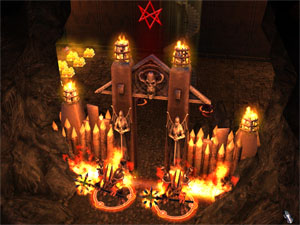 It is time to explore with Arantir. Follow him with a secondary hero here to help picking up resouces but don't get too close to get killed. If you read the road sign, the north seems to be the objective-related choice. Before the garrison (5) stands a Champion stack. When you try to attack it, an event triggers, revealing an underground passage, (II), SW of the Orc town (B).

At this point you might have enough strength to break through this (5) garrison directly, but the underground route seems to be quest related. There is a trading post at (T) to get some more Wood, but don't go broke on it. There are more lumbers to be picked up soon.

You can see a Stronghold town (B) right to the south. Maybe you think you can put an end to the weekly Orc invasion... unfortunately the Orc heroes do not come from the town - they are spawned by the script at the entrance of Town (B) no matter who owns Town (B).

Well, how about taking town (B) for extra income and weekly mass conversion? Nice try. The town is garrisoned by the largest army I have ever seen since "The Garrison" back in original Homm5 C1M5!

Ok, you always play on heroic but due to your lifetime video game experience, you still find everything easy. Dare to take the Stronghold town? Actually, a Necro hero like Avantir is the perfect candidate because: 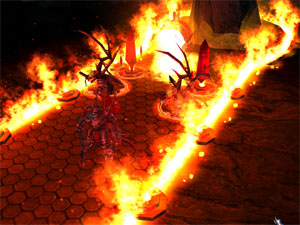 Building the "Castle" (the highest-level wall) in Town (A) triggers the completion of a secondary objective, which gives Arantir some experience. Around this time, the Red player should be sending larger army to invade your quarter with all 7 tiers of units. Have one hero stay in the area and defend against the Yellow and Red invasions.

By the way, if you are still missing high-level spells, there is an Arcane Library just east of the Trading Post (T), where you can buy them for 25 units of one of the rare resources.

Back to the walkthrough. If you take the passage (II) underground, your objective is to reach the other end III. You will emerge behind the Inferno castle (C). I actually do not recommend you check out the underground. It is not really a short cut to your next destination, town (C), obviously. There is nothing really worthwhile in there except a Gold Mine and some scattered cash in the end. I think the game developers left the underground passage an "unfinished basement". They left several branches blank, and even if there is something in the end, it is nothing amazing and you just wasted yourself half a week or a full week reaching the dead end.

So let's simply smash through the garrisons at (5), and literally bring down the Inferno town (C). This is not the end of the demon buggers, though. More will come through a two-way portal (III) NE of the late Inferno town. The visiting Demon hero is very weak but still a nuisance. Send either of you hero down the portal (III) and defeat two Tier-6 stacks at the end (6). The portal blows up and another objective is completed! 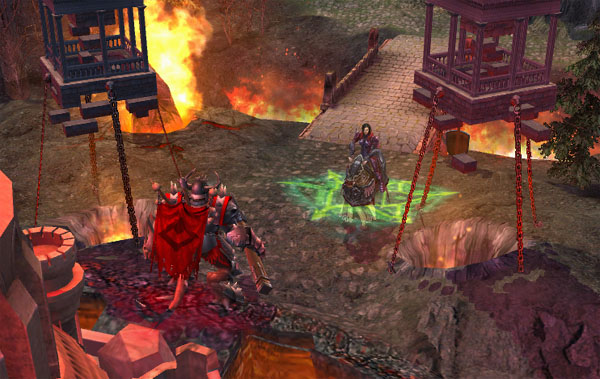 Like a lot of other Inferno towns, it is not built to last.

From now on there is no more AI action. Use summon creatures to call up units from Town (A) if you have not already done so, and march towards the Blue player at town (D). Here comes a list of attractions: