Free Heroes of Might and Magic II...
Yesterday, 22:14 by gsandro1 (47 replies)
in Heroes I-IV
I downloaded the latest version and played the Broken Alliance map, soooo niceee, after such a long...

Has anyone really solved the Temple...
Yesterday, 15:18 by DaveHer (19 replies)
in Might and Magic
As you walk into the temple click the door on the left, then the one on the back, then the front, then...

Tribes of the East → Will of Asha → The Bull's Wake 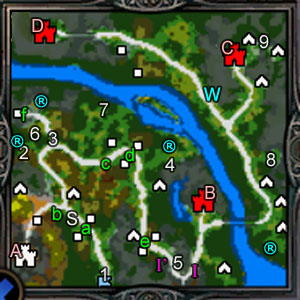 Will of Asha
M3: The Bull's Wake

Our focus is shifted back to Ornella. Your first impression is probably disappointment, though. Ornella has lost all stat points, skills and spells from mission one. Her stats probably looks very ugly now, with very low Attack and Knowledge. Fortunately, this mission is very straight forward. You capture a town first, develop it, and wear down the other player.

Pick Markal's Skull as the starting bonus. This is an excellent artifact (+5 Spellpower, +5 Knowledge) that saves Ornella's low Knowledge trouble. The morale penalty does not apply to undead units anyways. Too bad this artifact does not carry to future missions.

Ornella starts at (1), with a tiny army. Head north a bit and you will be greeted by some Peasants (a), strangely standing on a Necro symbol. They are actually camouflaged Necro units left over by Ornella's ex-mentor Giovanni. Since these peasants' brains have rotted long time ago, they swear loyalty to you without asking any question. 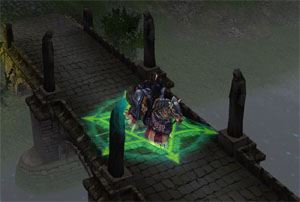 Even better, the two nearby "Peasant Huts" are automatically flagged to you and the guarding stacks will also join. Each week you get 20 Skeletons from each hut. Throughout the map, you will see several more stacks of Necro units this way. A small Necro symbol on the ground is never a trap! For example, in (b) you will find some Zombies saying Happy Halloween fresh from their tombs.

Visit the Stable (S) and head towards Giovanni's old castle. This battle is really easy. This is the only Necro town on the map, and will be your only base for quite a while. Flag the Ore Pit and Sawmill to the north immediately - you will be short of Ore again in this mission. Surprisingly, the mines are not guarded by anything. Hire at least one secondary hero to pick up various resources after Ornella. In my game there is a great Gold Bag (+1000G/turn) artifact at (2).

Ignore the stack at (3) as they will crush you mercilessly. At (c) and (d) you will find more volunteers. Visit a mana x2 spring at (4) to make Ornella's adventure even easier. Send a secondary hero east of (4), and turn north to land on a long island in the middle of the river. You can find a decent artifact there.

There is no easy way back to your town, so it is better to hire yet another secondary hero to ship new troops to Ornella. You can make these mule heroes travel a little farther by waiting them in front of the Stable (S) at the end of a week.

In this mission you will collect the rest of the Death's Embrace set - the best artifact set for a Necromancer.

Keep going south and flag the two mines along the way. (Since there is no Mercury Lab you have to build the 5000G silo in the town.) At (e) some Zombies ask you to speak to their masters - several Vampire Princes. The Vampires give you a choice of either taking 300G per turn, or simply recruit the Zombies. By clicking "OK" you will take the Zombies, the Vampire Princes, and the two nearby huts which produce 40 Skeleton a week. Cash is not really an issue in this mission (because of the Gold Bag) so don't feel bad about missing 300G/turn. 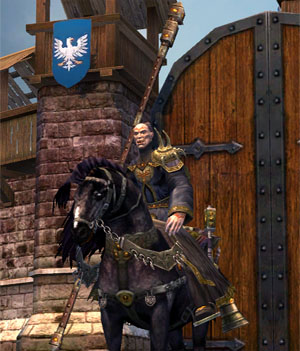 There is a Hill Fort (5) further down the road. Convert the Vampire Princes into Vampire Lords for their no-retaliation attribute. If you don't have space for Vampire Prince to join, visit the Hill Fort first to merge some stacks. The presence of a Hill Fort in each of the first three mission completely killed the need of upgrade buildings in the towns - we are so spoiled.

Around this time, the Red heroes should have started pouring through the one-way portal (I') just beside the Hill Fort. Fortunately, they are very weak. Let them flag your buildings and mines for now. Ornella has more important tasks to deal with.

After learning the lv4-5 Dark Magic spells, Ornella is powerful enough to crack the stack at (3). If you can predict the Battle Griffins' battle dive route (they usually aim at your strongest stack, which is usually Vampires), you can win this battle almost unharmed. The three Windmills is a great visit for a secondary hero. The little necro symbol in front of the Haven creature building (f) gives you the best reinforcement in this map. The building also produces nice high-level creatures. Also in this area don't forget to pick up the third Death's Embrace artifact at (6). Next, head straight to (7) to collect the fourth.

It is finally the time to swat the little red flies! Watch them flee in horror! Next, challenge the stack south of (5) to trigger the arrival of Ornella's idol, Arantir. Notice that the night has come and the map becomes foggy. You have two great heroes, plus four Death's Embrace artifacts and other goodies - now go on and resume world domination! The evil undead empire strikes back! 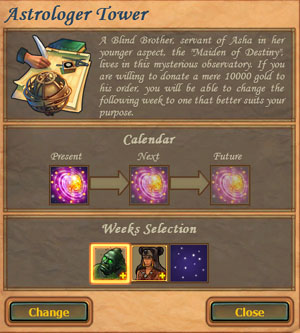 Your goal is to defeat the Red Player of Renegade Haven, currently owning town (B), (C) and (D). The mission becomes very easy from this point on. I will just mention a few scenic attractions along the way.

Free Heroes of Might and Magic II...
Yesterday, 22:14 by gsandro1 (47 replies)
in Heroes I-IV
I downloaded the latest version and played the Broken Alliance map, soooo niceee, after such a long...

Has anyone really solved the Temple...
Yesterday, 15:18 by DaveHer (19 replies)
in Might and Magic
As you walk into the temple click the door on the left, then the one on the back, then the front, then...