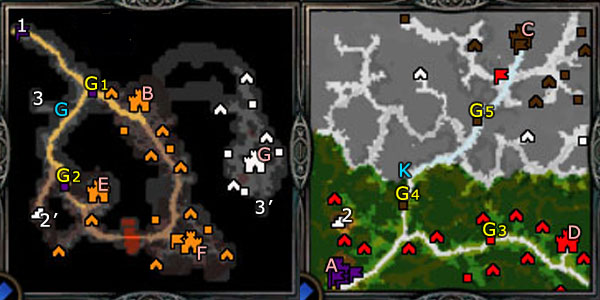 The last mission! The size of neutral creature stacks finally reaches the "swarm" level, and there are a couple of large battles to keep the challenge up. Your well-built heroes will have a fun time blasting through them, too! 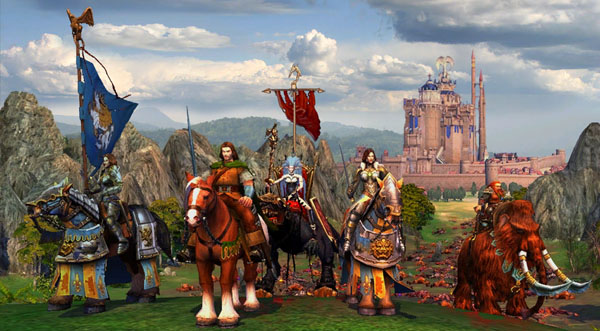 Wow, look at the corpses they left behind.

Since there will be five good heroes under your control (Ylaya, Isabel, Freyda, Wulfstan and Duncan), there are many ways to play this mission. Depending on your heroe's specialty, they are good at different tasks. For example, against a large army you probably want to use a Might hero (Freyda). Against a well-developed town Ylaya seems to be the ideal choice, since she can harm whoever hides inside without penalty. 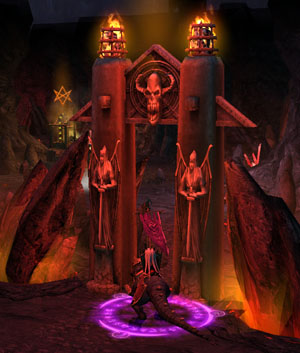 Below I will just give an example run. First, your heroes will start with quite a big army, so the unit bonus isn't really generous at all. Golden Horseshoe is quite nice especially for Ylaya's Warlock's Luck.

You start in the NW corner of the underground part (1). Your first objective is to reach Horncrest, (town A, currently under siege by Renegade armies) within a week. You don't really have to reach its gate, but have to be generally close to the castle until the game tells you "objective completed".

Even without logistics, Ylaya or Isabel can rush there within 5 days and half. I took a little time to break through the Inferno Garrison at (G1) and occupy Inferno town B. With Resurrection I was able to keep the loss down to 0. I built a Capital in Town A and started cash income right away. Isabel flagged the mines surrounding it as well.

The Inferno faction down here has a total of three towns. They are supposed to keep you busy while you are gathering army on the surface. However, right now the Inferno heroes are completely dormant, so you can freely take whatever you want. However, if you march a weak hero (like Isabel, starting with almost no unit) too close to a castle, their hero will rush out and make you lose the game.

Note:There is another garrison that Ylaya can attack (G2), but then Ylaya will not be able to reach Horncrest in 7 days. You can come back later for it. 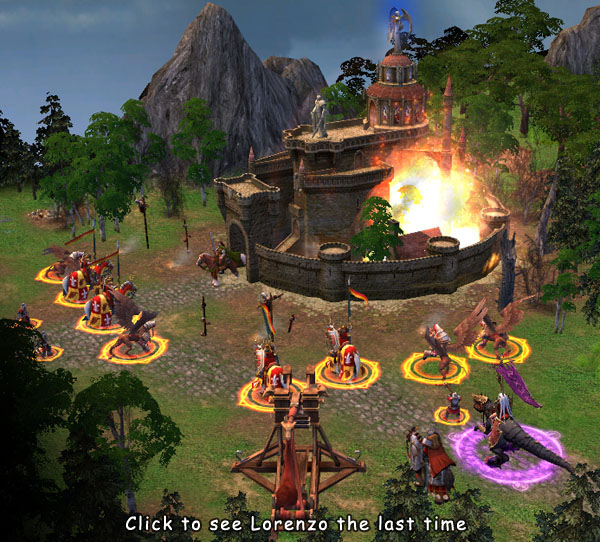 Take the stairway (2') to go to the surface. You actually still have the time to flag the Mercury lab just on the south. Resources are not very useful in this mission, because almost all towns you take over have been well-built. But since you might get a fair number of towns later, you can sell them for quite a lot of cash to hire / train more units.

The surface again looks familiar... yes, it is the same map recycled again! I was too lazy to visit all the stat boosts for all 5 heores, as I've lost faith since the last mission. These heroes probably will not appear in a future expansion pack.

From (2), go towards Horncrest, marked as Town (A). Different from Freyda's C1M1, you now have to wipe out these stacks one by one. None of these fights are difficult. The main Renegade hero (guess who?) is laughably fragile in front of Ylaya. Also, when you hit end turn, Duncan will help clean up some stacks as well. As soon as all stacks are gone, you gain control of Honrcrest as well as Duncan, Wulfstan and Freyda! They all come with a nice army, too. 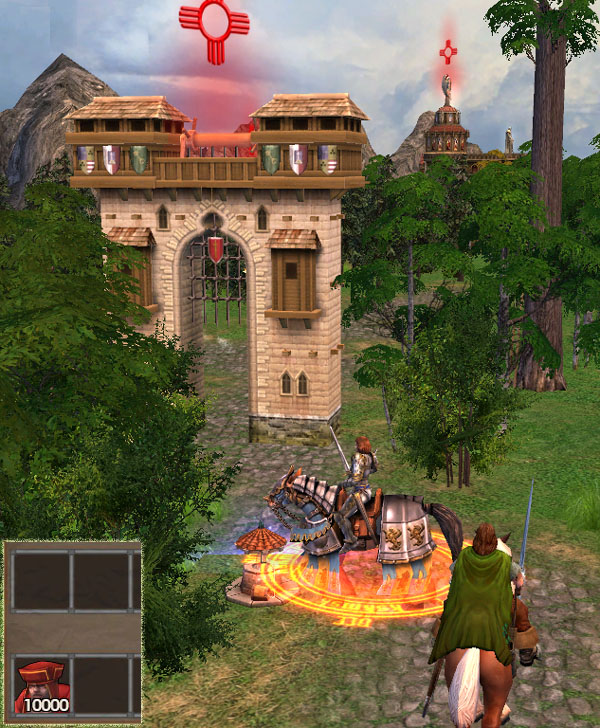 Your next (and last) primary objective is to take Tor Hrall (town C) within two months. This is the Dwarven capital that has been repeatedly featured in previous missions, so you must know where it is. From here you have a lot of freedom in deciding who to do what next. Here are my recommendations for a semi-complete run: 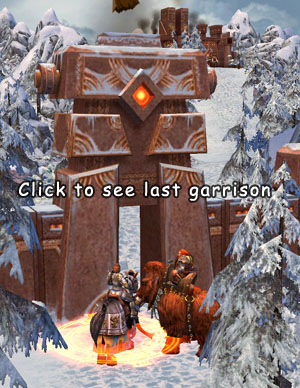 First, you can make Freyda, Wulfstan and Ylaya visit Horncrest for the Stable bonus. (My Isabel was still in the dungeon flagging mines and picking up resources.)

The best army to challenge the Dwarven King is a Haven army, since there are Two Haven towns available nearby. The other Haven city, Town D, is in the east. However, there is one new garrison (G3) that features exactly 10,000 Enforcers. Pick your best Might hero (in my case, Freyda) for this job, with all Haven armies from Duncan. Cast a lot of mass spells (Mass Haste, Mass Slow, Mass Confusion if you have them) and enjoy a one-sided massacre! The Renegade hero (Andreas) guarding town C is at a miserable level of 2.

There is also a secondary mission objective -- stop Demon armies. You have to take over all three Inferno towns (B, E, F) down there. Ylaya would be the best candidate (if you gave her Resurrection). March Ylaya back to the dungeon, break through the quite big garrison (G2), and take town D and E in a row. Problem solved! There was no demon army ever made it to the surface. However, you receive no reward for eliminating the Demons, either.

There is yet another town, a Dungeon, neutral town (town G), hidden in an enclosed area. The entrance is behind a Blue Gate (blue G), and the Blue Keymaster Tent (blue K) is behind the first Dwarven garrison (G4). I recommend Wulfstan for the job, since he is probably the weakest among three main campaign heroes, and this garrison is also the smallest among the five.

Occupying this Dungeon town serves no benefit to your campaign, and there isn't really anything interesting in this small area. Note that just before the two-way portal lies a large stack of Grim Raiders. 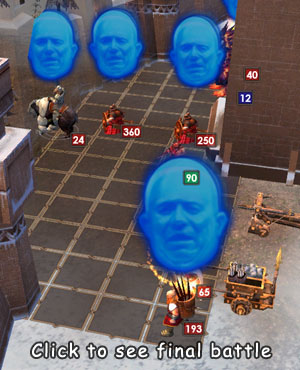 You could have rushed Tor Hrall directly after taking Horncrest. Your starting army was large enough, so it won't be a real problem. Another good time is the start of Week 3. By then you should have occupied all Haven and Inferno towns, so you have enough cash to buy / train units from both Haven towns. This brings you a larger edge in the battles coming ahead.

If this is what you wish, right after taking the Haven town in the east, pull back Freyda and march her towards the 2nd Dwarven garrison (G5), which is significant larger than the first one. Town portal Isabel back to Horncrest, and leave Duncan in Lostdale (Town D). On Day 1 Week 3, hire and train whatever you can afford (after hiring the Archangels sell all of your resources, you no longer need them), and let Duncan and Isabel catch up with Freyda to give her two-week worths of Haven troops. Fredya will suffer very little loss against the garrison G5 and the Dwarven capital, Town C.

The Dwarven capital town C is guarded by no others than King Tolghar himself. Although the Dwarven King he has a quite-large army, but he is truly dwarfed by Freyda's stats and Mass spell galore. You will have an easy time against him.

Your victory against King Tolghar also brings the end of the mission, as well as the Hammers of Fate expansion campaign trilogy. Good job, and thanks for reading the walkthrough!