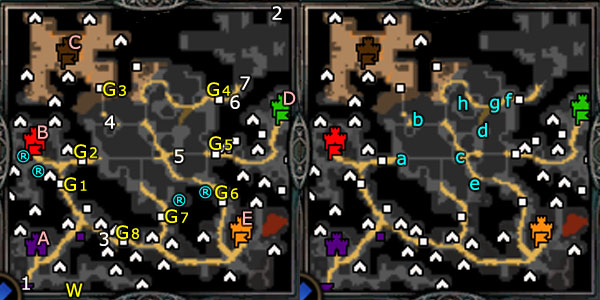 Finally, there are towns for Ylaya to learn magics. Actually, there are five towns in total, and you control a Dungeon town from the start. You are up against the other four!

Does this kind of unfair disadvantage remind you of Raelag's C4M3, where you were 0 against 7, and formidable Warlock hero rush you non-stop? Indeed, that was certainly the most difficult HomM5 mission on heroic. However, here your situation is not as bad, because: 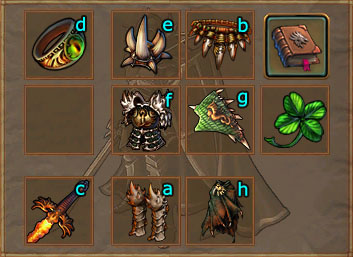 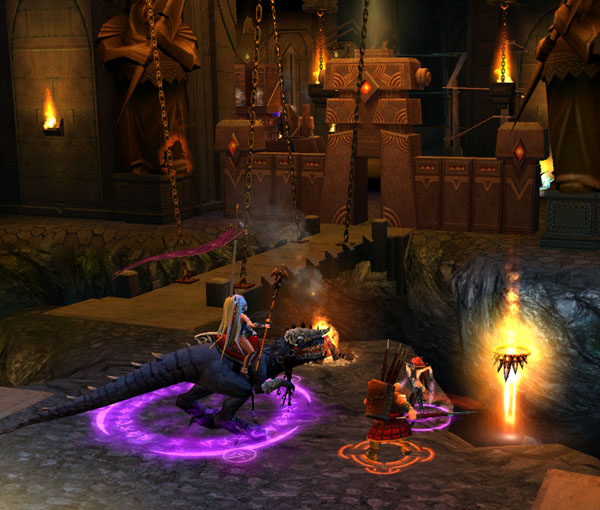 You start in the SW corner (1), with Town A under your command. Your ultimate objective is to reach the NE corner (2) to meet Raelag, the Warlock hero you mastered in the original game.

Theoretically, you can rush to point (2) non-stop, since your starting army can be split into numerous 1-unit stacks to buy you the time to blast through the enemy. For the walkthrough purpose let's do it the normal way. 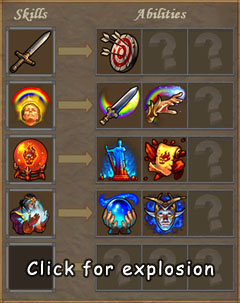 Hopefully, you start this mission with some nice skill and feat choices. If you took my recommendation and went with Destructive, Sorcery and Luck, with useful feats such as Warlock's Luck, Mana Regeneration, Erratic Mana / Arcane Training, nothing is going to stand in your way. You army are merely a "HP pool", which buys you time to finish off the opponent with powerful spells.

Troop conservation in this mission is quite easy, since you have a Black Dragon to start. This black dragon is the Daughter of Malassa, and you cannot afford to lose it. The Black Dragon has a lot of Defense and HP, and it is magic-proof, so it does not die easily. Therefore, often you can only deploy the Black Dragon and blast your way through the quite-small neutral stacks. Don't deploy it when there is an eney hero. The enemy hero usually directly attack the Black Dragon, and it can't last many rounds.

Your first priority is to take the Red Haven town (B) just north of your territory. Start by flagging the Sawmill and Ore Pit close to your town, and go to spot (3) where you can flag three resource mines. Your job in your own quarter is basically done, and you can now start rushing towards Town B.

In the meantime, build up your Town A with the emphasis on Deep Hydra and Minotaurs. They have a lot of HP, and are ideal spell damage sponges. The Assassins are also nice cannon fodders.

Between every town there is a Garrison (yellow G1-8), guarded by a small set of tier 1-6 Necro units. You should have no problem passing them. 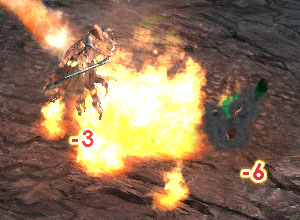 Town B is guarded by Renegade heroes. By now you can probably spell their names by heart - Valeria, Lorenzo and Andreas. Valeria is the main hero (much weaker than HofC2M3), while the two guys have been miserably demoted to very low levels.

Depending on your game, Valeria may actively seek you out (and lose horribly to your spells), or get stuck too far away to protect her Haven town. Sometimes, you can also see the Brown or Green main hero here. They will also attack you if the AI think it stands a chance (yeah right). They are not challenging at all.

When you take Town B, it will be around the start of Week 2. Ship new units to Ylaya, from your own Town A with a new hero. This way, Ylaya can immediately set out to combat more heroes and occupy more towns.

Very soon, you will face the main heroes from the other AI players. However, somehow the Orange player's AI hero always remain dormant in his Inferno castle. This also makes them the hardest to beat, though, since you cannot kill their main hero before hand. 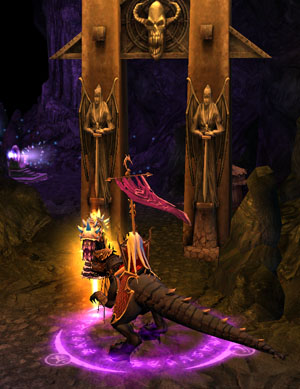 Your closest next target is the Dwarf town (C) north from here. You can reach it by going through garrison G2, spot 4, and then garrison G3. On the right mission map above you can see blue letters a to h. They are the locations of Dragon artifacts that are involved in a sidequest to be revealed later. If you come close to these artifacts, pick them up. They are all quite powerful.

Besides each Dragon artifact there will be some neutral Dungeon and Fortress creatures fighting each other, and make lots of noises. You can choose which stack to fight. When the fight is over, both stacks disappear (so you can't really "rescue" the Dungeon stack).

On your way to Fortress town C you can already pick up the first two Dragon artifacts. I have numbered them in the sequence you can pick them up.

Still, depending on your game the main Dwarf hero may be already defeated by you, or are still hiding in the town. It is also possible that the green player have sneaked onto the town when the Dwarf's main hero was away! Since you now have a lot more troops to soak up the damage, the castle assault shouldn't be any problem for you.

Now you own three towns, and there is no way you can lose. When you collect Dragon artifact c, d and e, ship the new batch of fresh troops to Ylaya. The new hero can meet Ylaya at some point west of (5), where you can visit a Stable right on the beginning of the next week. 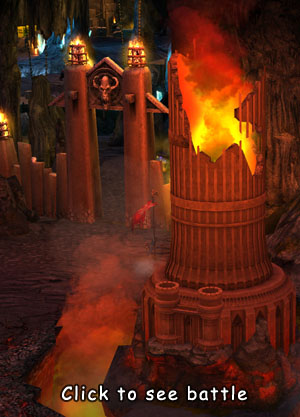 Needless to say, with that huge army you can now run over the Green player's domain (Town D) with ease. The Green town is also a dungeon town, and chances are you will instantly pick up some high-level magics when you step into it. Great!

When you march south to take over the last AI Player, orange Town E, it is also around time that you start building up Mage Guilds in all your towns. You might skip the Haven town mage guild since it will only have Light and Dark. In my game I started to develop Light Magic in mission 3, and I learned Resurrection in the Haven / Fortress mage guilds. Resurrection will be very handy in mission 5. More on that later.

You are almost done! Now gather all your army and approach Garrison G4. There are three more Dragon artifacts to collect here. Behind the garrison G4 you can visit a Seer's Hut (6). The Seer will ask for all your dragon artifacts and it will "teleport you" to Raelag. You will be immediately transferred to (2) the exit, where you only need to fight one small stack of tier-7 creatures. If you want to explore yourself, step in the One-way portal at 7.

Whenever you touch the One-way portal at (2), the mission ends. You can see Raelag and his suprising mistress in his secret hideout. In the next mission they will both join you, and you will have three high-level heroes to play with. Congratulations! 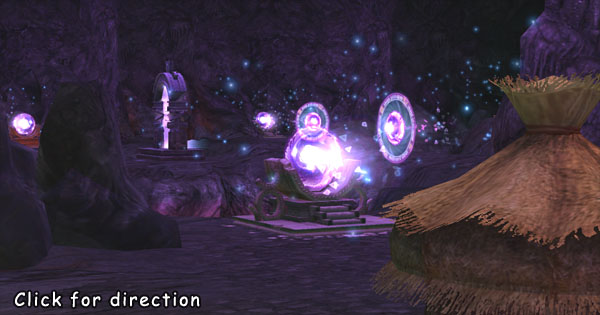