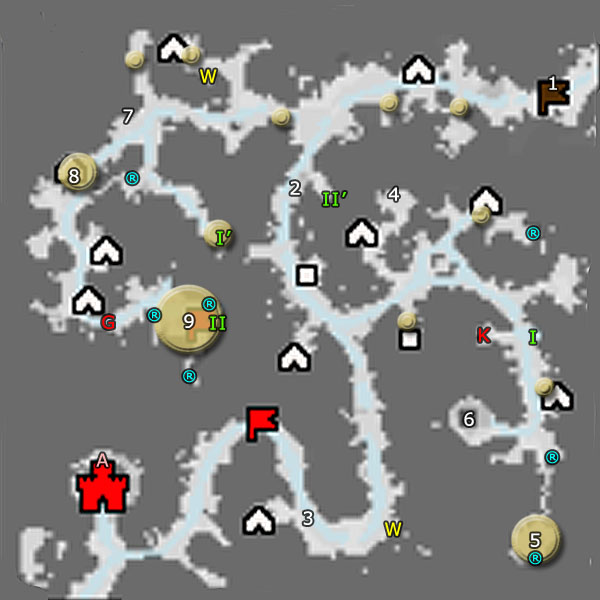 As the mission name suggests, you are going to fight Wulfstan's half brother, Rolf. Is Rolf going to be as tough as Lorenzo and Andreas in mission 2, and Andreas and valeria in mission 3? No. The main objectives can be completed in several days, but the sidequests can drag on for quite a while.

Start by picking the 6 Thanes as the bonus. They have good speed, initiave, defense, and gropu attack power. 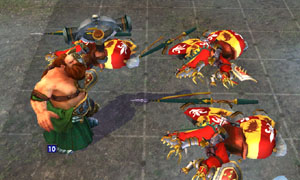 Wulfstan starts in the NE corner (1). Your eventual goal is to take Town A in the opposite corner. The game designer probably wished you to spend time picking up Fortress units, but your starting army is already quite powerful. If you have a good Wulfstan build by now, it is totally plausible to rush straight to the end without picking anything up. Let's talk about this fast route first.

Follow the main road west, and turn south. As soon as you reach (2), Rolf teleports in. Rolf is relatively the weakest mid-mission boss in the Fortress campaign. A few fireballs are enough to send him packing.

After taking care of Rolf, keep going south and you will hit a large stack of Champions. 10 Thanes + Fireball + Resurrection = perfect victory. (You can hide a stack of shooters in the corner to enjoy the "right-between-the-eyes" accuracy.) Keep going south, and you need to face a large stack of Fallen Angels. 10 Thanes + corner shooters + Fireball + Resurrection = another perfect victory! 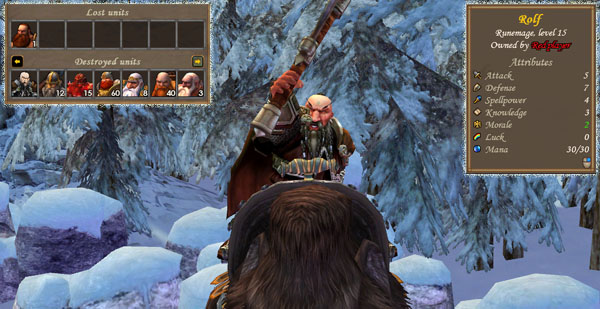 Even 3 Rolfs can't beat valeria in mission 3. Shame on you... Nival!

Keep going south and you can see a Witch Hut (yellow W). This is the first Witch Hut of the Fortress campaign, and there are only three in total. Follow the road west and north. As soon as you hit (3), an old friend - Duncan rushes in a join you! 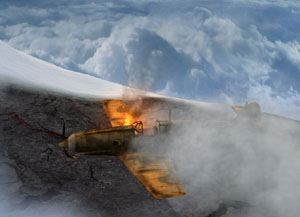 Duncan has a powerful Haven army with him, and a lot of them are shooters. Give all shooters to Wulfstan (or Duncan if he is a better hero), and run straight for Town A. Mission ends right here!

If you wish to fully explore the map, there are a lot more to do. Right after taking Duncan, back track to the last intersection, and go east (where the Observatory is). If you gave Duncan enough fighting experience back in C1M5, Duncan is probably level 26 or above already. You only need to work on Wulfstan's experience gain. There will be enough experience points to level Wulfstan to the cap as well, due to the sidequest that I am going to describe next.

Try to flag all mines, and pick up every single resource you encounter, because they will be needed in the sidequest. You can buy a mission map with 4000G at (4). You can not only see where the roads are heading, but also spot something out of place at the NW corner of the map... Nice smoke effect, by the way. 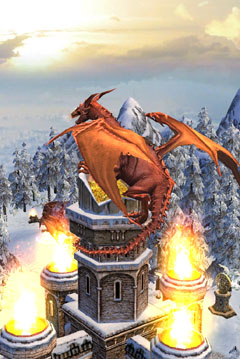 When you approach a neutral Dwarven stack, they will either join you for free, or ask your to pay a welcoming fee. The request can be any of these: 25 Wood, 25 Ore, 15 Mucury, 15 Crystals, 15 Sulfur or 15 Gems. If you don't have the requirement, or don't want to give, choose Cancel. The creature will then ask you whether you want to fight them; choose Cancel again. Now you can approach the stack once more, and the creatures may ask something else.

I have marked the neutral Dwarven stacks on the map with yellow buttons (hopefully I didn't miss any). The larger the button, the bigger / more useful the stacks. In order to complete this sidequest you need to gather a total of 10 stacks, which is not difficult at all. (The largest button actually contains 7 stacks.)

You can also make Duncan to visit these stacks and make deals. The Fortress troops will automatically go to Wulfstan. This is very convenient, except that Spearthrowers don't mix with Skirmishers, and Wulfstan already reaches the stack limit of 7. You can always temporarily swap army between Wulfstan and Duncan to create rooms.

After buying the map, head east and then south. On your west you can see a Red Keymaster Tent. Grab the key (important), and continue south. You will soon see a a Two-way portal (green I), which connects to the west side (green I'). Don't take the portal now becuase you still have important business down south. Keep going south, and look carefully, there is a hidden pine trail of the forest! At the end there is... a sun-sweet berry of the earth, in the form of... a good stack of Thanes join you for free! Wohoo!

With this large stack of Thane you can now tackle a large dragon stack on the road side, and the Dragon Utopia close by. With resurrection, the tactics are basically the same. 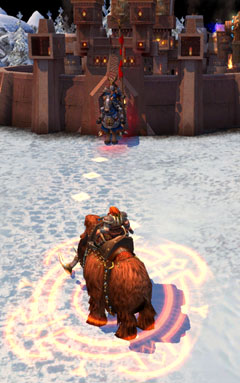 Now take the two-way portal (I) (and pick up a large stack of bear blocking the portal). You are now on the other side, at (I'). Go north first to collect more troops and visit a Witch Hut (yellow W).

If you were too weak to handle the tier-6 Champions south of (2) at the beginning, you will end up being here first. You can now use the portal I' to go to the east side for the Red Keymaster Tent. The rest of the walkthrough should be the same. You may want to pick up Duncan as early as you can, so he can visit stat bonuses as well.

Next, come back to (7) for the Mage Vault. Further south there are some Godzillas (Magma Dragon) guarding a gold mine at (8). You can buy them as you do to any other Fortress creatures.

From the gold mine, follow the road south and east, and you will see the Red Gate which you already have the key for. Pass the gate, and you will hit the Million JACKPOT of this mission at (9) - with a total of 8 neurtal stacks (7 for purchase and 1 for free), 3 stat boosts, and a Hill Fort to spend all of your now-useless cash! At this time, you must have collected more than 10 neutral stacks. Your get a nice EXP reward, which pushes Wulfstan to the next level.

When you rob this jackpot area clean, take the one-way-portal at II, and emerge back on the main road at II', just like Rolf did earlier. You can now finish this mission - taking Town A. The AI garrison in Town A was already weak at the beginning, and now your army has grown 10-fold. So...

Yes, there is no mission boss. Yes, this mission is way too easy. (Still, congratulations!) 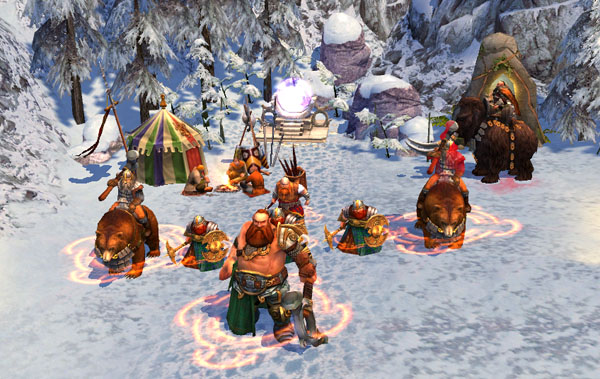 Rolf was actually part of the Jackpot on Day 1. It will be more fun that way...