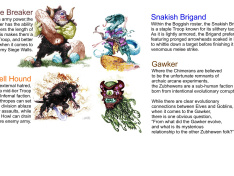 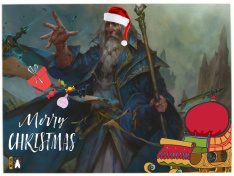 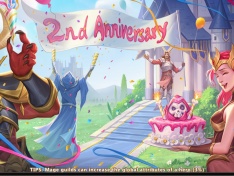 After a rather easy first campaign, things get trickier halfway through the Hammers of Fate expansion pack. For maltz, the third mission of the Fortress campaign at heroic forced him to replay the first two scenarios in order to build a "better" Wulfstan. He shares his tips with you so that you don't have to play the campaign twice.

Walkthroughs for The Guerrillas, The Brothers and Lazzlo are now online, with screenshots, map size and level cap information, difficulty ratings and annotated maps. I won't talk about the scenarios here to avoid giving away any spoiler. Work on the third and final campaign has already started, so expect the final batch of articles very soon. 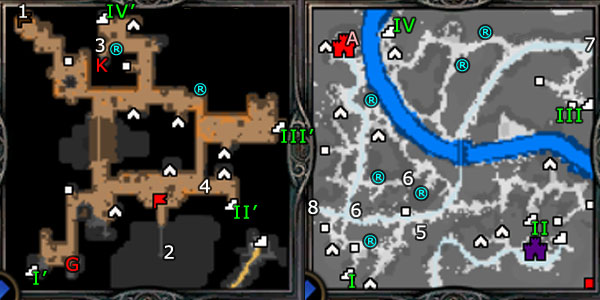 This mission is quite challenging, if not a little too much to handle on heroic. If your Wulfstan build has not "matured" yet, you might have to restart from mission one, which happened to me the first time!

First, pick the 30 Skirmishers, or the artifact if your ATK is miserably low (such as < 10). 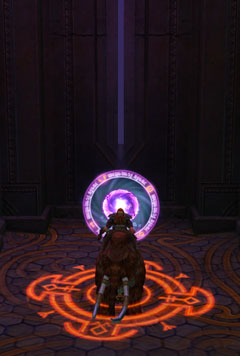 Wulfstan starts in the NW corner (1) of the underground hallway - this time without the atmospheric hanging lamps. Your first objective is to free a prisoner at (2) within 3 weeks. There is enough time to flag a few extra mines, visit the stat bonuses, and recruit several stacks on the way. You probably won't come back down afterwards, so try to do everything in one go.

There will be a Red hero (guess who, Andreas or Lorenzo?... duh) patrolling around the major streets. Unlike other patrols, though, Andreas' movement is not predicatble, and he sometimes picks up neutral Renegade stacks to make his army even bigger. In my second attemp of this mission, this walking tank actually got stuck in a corner for good, which is very nice!

Andreas' army size varies with difficulty. Since there is no steady troop supply this early (and you start with a small one), it is better to conserve your troops for a difficult battle ahead, even though Andreas carries a few nice artifacts. As long as you stay out of his "range of detection", you should be safe.

Start by going SE. In this square area you will see 3 stakcs of Defenders offering to "entice" other patrols. If you answer Cancel, they will simply disappear. If you answer OK, they will also disappear, but at the same time reveal 3 other small stacks of Defenders elsewhere, who will join you. However, it seems that Andreas will be attracted to the last stack of Defenders that is revealed, so talk to the south-most Defenders last, and Andreas will be attracted away from all of your primary interests. (Thanks to shep61.)

Go east and turn north, where you can visit a Siege Weapon Workshop (3). Buy an Ammo Cart to make your Spearthrowers happier than a drunk dwarf. There is a Red Keymaster Tent (red K) hidden inside a dead end. The corresponding Red Gate (red G) is located in the SW corner, locking away a friendly stack of Brawlers and an artifact. Try to get this stack of Brawlers before you exit the dungeon. They are quite helpful later.

Continue east, then south, and head for the prison. If you have learned Resurrection, you can easily flag all mines that you come across; there is one of each kind here. At least, flag the Sawmill just north to the prison, as you can always use some Charge rune magic. Also, just to the east you can encounter a quite-large stack of Spearthrowers (4) that always offer to join. Don't miss them! 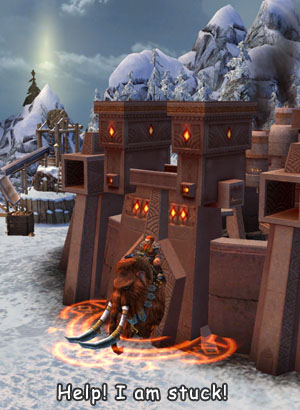 At the start of Week 2, you will see a blue heroine emerging in the SE area of the surface -- Freyda! Isn't Freyda on her way back to the Griffin Empire? Or does C2M3 take place between C1M4 and C1M5? Anyways, you can watch Freyda ignore the stat boost, flag the gold mine, take over the purple town, and exit the stage from underground. She wasn't chased by Rolf or anyone, and she actually gained one extra town... By the way, it is impossible for Wulfstan to reach Freyda's quarter in this mission, so you may as well forget about the town and the DEF + 1 stat bonus.

When you reach the prison (2), a purple hero named Helmar is freed. You receive a secondary objective, which requires you to help Helmar "escape from these lands". This sidequest is completed as soon as Helmar reaches the edge of the map on the surface. There are multiple routes to the surface exit, and it seems that Helmar will pick an exit that is farthest away from Andreas' location. If you have made Andreas stuck at the NE corner, Helmar will pick the SW exit. In my two attempts of this mission, Helmar picked stairway I' (connected to I) in one, and III' (to III) in the other.

Helmar carries a small army of 20 Berserkers, so he can get killed by a larger neutral stack. If this happens you fail the sidequest, but the mission still continues. In order to safely escort Helmar, you have to defeat the road-blocking neutral stacks before Helmar reaches it first (and die). This shouldn't be too difficult as Helmar travels much slower than Wulfstan. After Helmar exit the stage, you receive 50 Berserkers as a reward. Great!

Your next objective is to take Town A, Merasgar. This Fortress town is garrisoned by a Renegade Haven hero, valeria. (Where did Lorenzo go? You can see him buried under a mountain in the SE corner, probably to keep the Red player alive.) valeria leads a fixed number (non-growing) of Haven army, plus a growing number of Fortress army. On heroic, there will always be 11 Champions, 18 Zealots, 15 Battle Griffins, 56 Crosbbowmen, 156 Enforcers, plus an increasing number of Magma Dragon and Defenders. (On easy, the Haven army is only about 1/4 of the above size.) 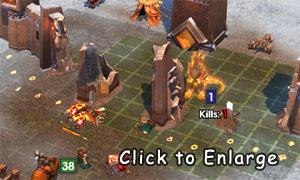 The number of Magma Dragon grows by 2 each week, starting at around week 3. If you assault the castle during Week 4, you will be fighting 4 Godzillas. On week 5 there will be 6. The growth rate of the Defenders, on the other hand, seems to be far more overwhelming. On week 4, I saw 220 Defenders, but on week 5 the number doubles to a whooping 440! There is little hope that you can outgrow this garrison from creature buildings.

Since valeria is a number of levels higher than you, and her skill choices are quite decent for a castle defender, this will be a very difficult battle on heroic, particularly because your Wulfstan isn't as good as you wish him to be yet. Your ranged units will be almost useless (click to see a screenshot). I had to restart the entire campaign in my first attempt, because I didn't pick Desturctive Magic. On my second attempt, I pulled through while losing the majority of my army. Here are a few tips: 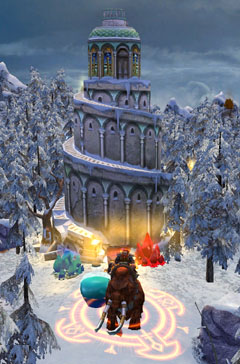 When the range units inside the town started to die off under your fireball bombardment, valeria's formidable melee units will come out. Keep throwing fireballs at them, attack non-stop, and hope for the best!

When you finally take Town A, the red AI has probably built every non-creature building, plus the Magma Dragon structure (2 each week). It is great to walk around with these Godzillas. Be careful that they are immune to a lot of magics, including Resurrection, so once they got killed you lose them for good. At the same time, you also receive a new objective of "seizing the gold caravan". In essence, there will be a Red caravan travelling from the NE corner of the map (7), heading SW towards its destination (8). 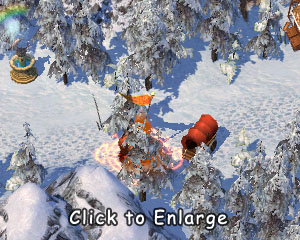 Although the game objective doesn't specify a time constraint (one or two weeks, it says), you are actually quite pressed with time here. You will be reminded of the caravan's position on the road. In my game, the caravan took exactly 7 days to travel across the map. If you don't catch up and destroy it in 7 days, you die from the video tape's curse... er, you lose the mission!

There are quite a few stat boosts (blue (R)) to visit on the surface, plus it will be nice to level Wulfstan to the cap. It is impossible to do them all in 7 days, right? Actually, there is a way. Since Nival always patch up goodies in their script plus five extra unecessary penalties elsewhere, I am not going to say too much here. Take a look at the screenshot and see if you can figure it out. (I am glad that my caravan was blocked by a garrison back in Freyda's campaign!)

So, hopefully you now have enough time to explore, even though the Red Caravan has almost reached the exit. Don't miss out a new type of stat bonus, the School of Magic, which gives you one point of Spell Power or Knowledge. Also, there is a Dragon Utopia at (9) that you can pick up some Lv 4-5 spells that you have missed so far.

The Caravan of Gold does not carry a lot of units, so you can defeat it easily. Congratulations for winning this difficult mission! 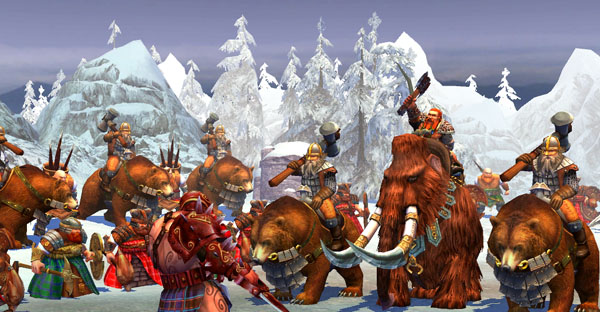