CH →
Walkthroughs →
The Warlock → The Cultists
﻿

The Warlock → The Cultists

This is a rather straight forward mission in the Warlock Campaign. Basically, you need to completely clear the map of the enemy SoulScar clan. Unlike the previous mission, this one puts you in a much more subdued position. You start out without a castle, and the enemy has seven (yep, seven). Obviously, it all boils down on how well you built Raelag in the last two missions. If you have leveled him nicely and have high Spell power with Expert Destructive Magic (and learned the high-level spells), Empowered Spells, and even Warlock's Luck (highly recommended for patch 1.3), then you will have a good time wiping out the enemy with Raelag's special ability.

Well, maybe not. On heroic, this mission is widely regarded as one of the toughest among all, simply because the AI heroes are bumped up a lot after patch 1.2. Fortunately, there are a few things you can do to survive. If you are playing on patch 1.3, your mana runs out twice faster, but you might get a Warlock's Luck on your first Empowered Meteor Shower, saving your day. Resurrection s extremely helpful. Although it has been toned down in patch 1.3, you can still save up to 2/3 of your casaulties if you cast it at the right time (which is near the end of the battle). 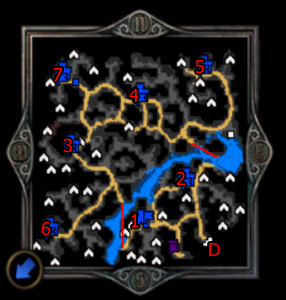 Spoiler: view a screenshot of the underground 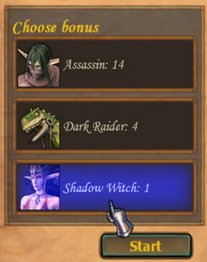 Let's start from the beginning. As always, three bonuses are available - 14 Assassins, 4 Dark Raiders and one Shadow Witch. I strongly suggest you pick the Witch as even though you start out with 1 Matriarch, the Witch will be useful as a secondary spell caster and as such be an easy choice amongst the three bonuses.

Shadya starts out with Raelag as well, and thankfully she has reinforcements. The Shadow Matriarch I mentioned above is just in front of you, so pick her up. Don't be too hasty with the Blood Furies, as they are hostile. Clear the Blood Furies now, such a waste. :( On post-1.2 heroic, especially 1.3 (where you use up mana very quickly) you probably want to fight them with Shadya, to save Raelag's mana for the real fight on the end of the day.

Transfer almost all units from Shadya to Raelag. You probably won't need her power for the first week at least (simply because you don't have enough troops). Your total army with Raelag should now consist of: ~80 Minotaurs, 30 Blood Maidens, 1 Shadow Witch, 1 Shadow Matriarch and 24 Assassins. Not much, but most of the damage output will be done by Raelag, if you intend to win this scenario.

Above you is a Hut of the Magi, which will reveal a small portion of the Surface. The war you are fighting will only take place in the underground, so why reveal a part of the surface? As you may have noticed, the Soulscar clan is aligned with the Demons, and they will continually send heroes (with increasing strength) to fight you. There will be a total of three waves, spawning as soon as you own 2, 4, and 6 towns. The demon Heroes will have to take the path which is revealed by the eye of the Magi, so this will serve as a warning system to you. The Demons will invade strictly from Point D marked on the minimap. 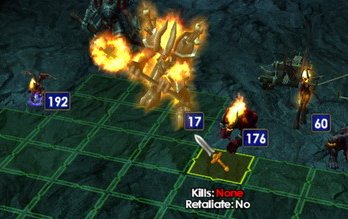 The enemy Warlock has 7 heroes who are relatively strong. Depending on difficulty, they will start with a moderate army with lv 18-19, or with a big army (which enables them to crush you on quick combat) with lv 22-23. Sooner or later they will come after you. On heroic, rest assured at least 6 of them will show up during the first two weeks, and the first one attack you on the end of Day 1, and the second on attack you on the end of Day 2!

Start by taking Castle #1. The enemy hero stationed here will come after you sometimes. Hopefully you'll fry everything else with Meteor Showers or Chain Lightnings before your units are killed off. Note that the units you deploy on the battlefield decides the random seed how the battle will go, so if you definitely cannot win a certain battle, try to hide some stacks, and maybe luck will come to your side. You should be able to take Castle #1 by the end of Day 2.

Now that you have one castle; it's essential that you secure the other one who lies just north-east in close proximity. Undoubtedly the enemy will have another high level hero waiting for you there as well. (or come to you directly when you hit End Turn this time) Hopefully you have enough mana left. You can quickly upgrade the wall and pray to Asha, if that boosts your confidence. If you are playing on a lower difficulty, then you actually have about a week of free time now. You can use Raelag to flag all mines to the south, and then take Castle #2 before the end of Day 1, Week 2 (so you can hire the fresh units from it).

From now on, every castle assault will look similar. You just need to feature some high-hp units to soak up the damage, while quickly use Meteor Shower and Chain Lightning to paint the floor with their blood. Once you have these 2 castles, you have a bit of breathing space, as the small peninsula is under your control.

Well, hold your breath on heroic. Your nightmare just started! There are still a handful of powerful heroes rushing straight to you, and they are not less powerful than the ones you've just beaten. The first wave of demon army will knock on your door on the third day as well! It is very likely that you cannot hold out both towns, even if you didn't really lose any significant army yet (learned Resurrection from mission 2?). You might need empty up Castle #2 and focus on defending Castle #1, which is much better built and profitable (as you should have put a capital in it). The demon army will take Castle #2 (and build it up a bit, until you take it back later rather easily).

On heroic, don't even think of going out with Raelag before you take out 6 mighty heroes (there are 7, but one usually gives up the entire army to another and go back to recruit.) Don't even think of flagging mines that are deep east. These powerful heroes are coming to you in a stream, and they will use up your mana (especially on patch 1.3).

The toughest hero is usually Lethos. His army is bigger than the others, and he likes to pay a visit to the Dragon Utopia on the way here. He'll usually get Implosion there, plus a handful of great artifacts to make him even harder to beat. If you are lucky, though, you can get the Emerald Slipper from him (50%+ on your Meteor Shower and Implision, can't beat this deal). Generally speaking, unless you can't make it back in time or you have no mana, always fight with Raelag. You will lose much less units with Raelag (because of his Intimidate special). <[>Your hard days will be finally over when you take care of the initial wave of assault. There won't be anymore in the short term.

If you are not playing on post-1.2 heroic, then take over whatever mines and resources lie around. Though you are separated by water, there are two portals (marked by red lines) which lead to your way, on the far corners of the peninsula. I strongly suggest you use Raelag for the conquest out there, but not give him all the troops. Raelag will gain troops from the castles he takes over, whereas you need a lot of defense for Shayda.

If you rush out with Raelag rather early (i.e. not on post-1.2 heroic), then whichever portal you take with Raelag, you can expect mighty heroes to come out of the other route. Another problem is the demons assaulting your towns. They will always teleport in the bottom-right corner, so your first two towns will be in danger. More reason to keep a good amount of forces for defense.

What is done and how it's done from here is almost just like in a normal scenario. You have to take over every castle. I marked the way I took on the minimap numerically, but depending on the AI decisions that may or may not be the best way. There are two "outer" castles on the edges of the map, two "inner" ones, and one stronghold in the northwestern corner. The stronghold is protected by a garrison, which should again, be no match for Raelag's magical arsenal even on heroic (where you will see a few dozens of Death Knights). Alternatively, if you are confident enough, just to a grand counter-clockwise tour of 6-3-7-4-5. On 1.3, your mana will run out after the garrison, so you probably have to take Castle #4 before #7.

Before you finish the mission, there are quite a few stat bonuses scattered around. There are five islands on the ground level; each can be accessed by a two-way portal in the underground level. Each island contains one stat bonus. One of them has a Witch Hut and another contains a Sylanna's Ancient (level up tree). There is also another confined underground area accessible from another two-way portal; there is a witch hut inside.

By the way, the Inferno heroes tend to ignore town 1 and 2 when Raelag is not around. So once you've secured one side of the portals, you can also send Shadya out to the other direction to capture towns. You should be able to squeeze the blue to only 1-2 towns left in the first month.

Once you have taken control all castles, victory will be yours! Congratulations if you beat it on post-1.2 heroic!