CH →
Walkthroughs →
The Ranger → The Refugees
﻿

The Ranger → The Refugees

A good reviewer makes a good walkthrough writer, as shown in Psychobabble's latest articles. The Celestial Heavens editor is on a roll and, despite a lack of free time, posted the first of a series of articles about the Sylvan campaign. The Refugees appears to be a defensive map against necromantic troops, but you will soon have to face a much stronger enemy. Making a favoured enemy and hitting the level 12 cap are the critical objectives of that first part of the campaign, and Psychobabble explains how you can achieve that.

You might be able to complete the map before the patch comes out, so give it a shot. With the help of another writer, more walkthroughs for that campaign should be posted during the next few weeks. 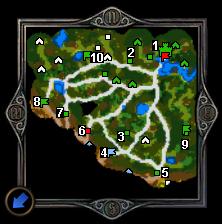 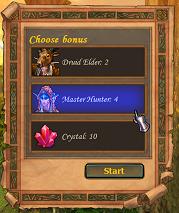 Master hunters are the best sylvan creatures for their level, imo, so I'd definately recommend that you take four of them over 2 druids, especially as you'll be able to reinforce that stack much quicker than you will the druids.

Your true objective in this map isn't immediately apparent. It seems that it is a defensive map where your aim is to keep the necromantic hoards from overrrunning your borders. But in reality you only need to defeat about 2 to 3 waves of Necro army, and at the same time preparing for a fairly tough inferno invasion led by a hero named Biara. Biara arrives during the first week of the the second month. If you get a chance, always try to kill inferno stacks, especially the high-level ones, this way you can make them your favoured enemy in the Avenger's Guild. Prioritize unit production in starting town (1), so you can quickly gather a powerful army to flag important mines and clean neutral stacks. Of course, you should also be trying to get Findan, your primary hero, to the level cap as well, but that won't be too difficult.

Patch 1.3 changes the resource requirement quite much. You will be short of gem and wood initially, so your first goal should be to flag the Saw Mill just NE of the town. Then, quickly rush back to take over the hunter cabin just to the south of 1. Also, on Day 1, hire a new hero to help pick up resources to conserve Findan's precious movement points, and to give Findan some more army to start with. Doing these will give your army a much needed early boost.

To get the resources flowing, take over the ore mines to the north of 2. Given some unfortunate restrictions on building upgraded creature dwellings in your primary town, you might feel like your army is constantly behind the curve, especially on heroic difficulty. You will be able to upgrade units in a Hill Fort later, but you should have Sprite and Master Hunter upgrade as soon as possible. Master hunters get the Warding Arrow ability, which pushes back the enemy's action. Try to split them up to multiple stacks and the enemy probably will have trouble even getting a turn! Deploying nothing but sprites will get you a flawless victory against slow enemies (Zombies, Footmen, etc.). Save out your Ammo Cart by not luring the enemy into the striking range of your Ammo Cart. Also, there are other things to do with sprites: 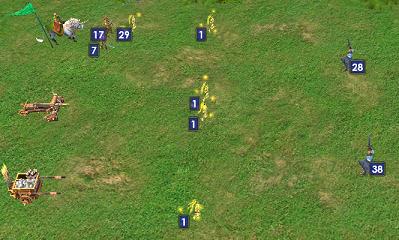 In this battle, I've position four single sprite stacks one square out of the reach of the enemy stacks. Instead of running all the way forward like they should, this seems to make the enemy take just one step forward (so they are just in range of your creatures for their next turn). Of course, you can just move one square back and repeat the process, while you're whittling the stacks down with your shooters and hero. This doesn't work forever - I think if the enemy gets within two turns movement of your non-sprite stacks they rush forward - but it certainly helps against certain neutral stacks.

As for where to travel on the map, it would be nice to take the hunter cabin at 2 early, but it seems to be always guarded by master hunters, which are not worth attacking early in the game. You are quite weak in the first week, so don't walk too far of or challenge too powerful enemies. If you can, flag the gem mine just SW of the town. That will help a lot. While you will be short on resources, there are tons of resources lying around on the map. Later on, you can send Findan and his squire hero on the road to collect them.

During the first week you should be attacked by a scripted Teal (Necro) hero on one of the garrisons. Your garrison should be able to get rid off them for now. The next heroes will have no trouble running over your garrisons, though. If you don't see any Teal hero attacking your garrison during the first week, you might have a bugged game, and you better be prepared to restart as this mission will never end without the scripted event working. The patches seem to solve this problem (1.1-1.3 all work fine).

At the beginning of the second week, ship your new troops to Findan and go out exploring. If you have enough non-upgraded units, you can walk towards the Hill Fort to the south of 3. Now if you are using patch 1.2 and beyond, you can skip the next paragraph as the following exploit has been fixed. 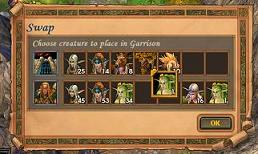 If you are playing on versions before 1.2 then you are here for a real treat, if you're not averse to taking advantage of bugs, er, "undocumented features". You can take the creatures here into your army by switching stakcs from your army. I suggest you split off a few single sprite stacks to do this with. Now you might be thinking that stripping your garrisons of their defences is going against your main map objective, and you'd be right. But luckily, you only lose the map if the teal player captures two of your garrisons, so it's reasonably safe to take the creatures from one of the garrisons. But do make a proper save before doing this, if you're unable to beat back a proper attack on one of your other garrisons (at 5, 6, 7 and 8) then you might get overrun in two places and lose the map.

Don't worry if you've upgraded to patch 1.2 and above. Things are still managable on heroic and you will be able to visit all 11 stat bonuses (which brings you 12 extra stat points) just in time -- if you know what you are doing, of course.

As you travel around you should be building up Findan. I recommend focussing on Luck and Logistics at this stage in the campaign. Elven luck, which has prerequisites of basic luck and soldier's luck, further increases your damage during a lucky shot by 25%.

This Sylvan campaign is probably the most difficult among all. On higher difficulties, you should really consider the skill choices. You need something that really makes you fail-safe in tough battles. Light magic is widely regarded as the most friendly campaign magic school, simply because it makes troop conservation very easy (Resurrection). If you ever reach Expert Light here, rush towards the Mage Vault and see if you can learn Resurrection. If you can learn it here, your life will be much easier later. Also, just NW of the Hill Fort you can defeat a stack of Cavaliers to learn Righteous Might - very powerful if you pick up Master of Wrath.

Dark magic is always versatile especially against HUGE stacks, and it is also suitable for Findan's low spell power. (Rangers' primary attribute is Defense and Knowledge.) Even better, patch 1.3 makes Puppet Master way better than before by removing its cancellation upon taking damage. Now you might also want to grab Sorcery if you like the "manipulative" way, as it just makes Findan a much better caster.

One of the special combos a Ranger could adapt is War Machine + Imbue Arrow + high-level Destructive Magic. Patch 1.3 made this more difficult by double the amout of mana required for high-level Destructive magic, though. By the way, if you are thinking of the ultimate Ranger skill for Findan, you can cancel the idea because Findan's starting Tactics ruins everything. Fortunately, you'll still be able to see it in your other heroes later in the campaign.

Getting Expert Avenger isn't a bad idea either; it will help you greatly in the boss battle if you can get double damage on nightmares and succubi. It's a little risky to visit Witches Huts (there are 3 in this mission) without knowing what they offer, because the skill you get might not be from the skill tree you are focussing on and your development will get messed up by being offered useless skills in other specialties. Of course, you can always save your game before a visit.

If you're looking for places of interest to go to, there's not too many, but the Unicorn Horn Bow at 9 is useful (negates ranged penalties for shooters) and there's a gold mine at 10. Each of these are quite well defended, though, so don't bother getting them if you're going to take heavy casualties.

After beating about 3 waves of Necro heroes, Biara (Red player) will appear just outside the garrison at 6 early in the second month. You better be ready for it. If you can swap army from the garrison (pre-patch 1.2), it is a good idea to have a hero (not necessarily Findan) sitting just outside this garrison to take take all the creatures out of it just after Biara appears, because she will overrun it with few casualties if you leave them there. Send those creatures back to your main town.

Also, it's essential to get as many creatures as possible upgraded in the Hill Fort. It is usually necessary to have a chain of 2 or 3 heroes (can involve Findan as the final heat) going from the town to the fort, and back to town to receive the upgraded latest week's growth. Biara will head straight for your town - and she will reach your town on the third day that she passes your garrison, so make sure you are able to get Findan safely holed up in there before she arrives. If you've been able to take out some inferno creature stacks, set up the highest level upgraded inferno creatures possible in your favoured enemy list and then wait for her to attack. Once you beat Biara, the map ends!