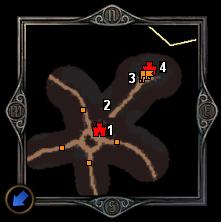 Finally, a set of bonuses which are somewhat worthwhile. I picked the titans because they're awesome creatures and they go in Zehir's army, which is the one which most needs a boost. However the Dragon Scale Shield is a very powerful artifact and if you feel like a spellpower boost then feel free to grab it. 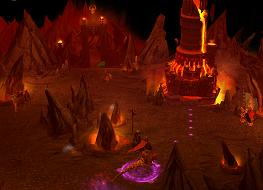 In my first run through this map, on hard difficulty, I found this map particularly difficult. This map involves a series of fights with each of your heroes and all of the fights were easy, except the ones with Zehir who was definitely the weak link in my chain. This was probably because I rushed through the early maps as quickly as I could, not taking any time to pick up stat boosters, hit the level cap on level four or find the summon phoenix spell (I did try with the latter; it just wasn't offered to me). My second time through, on heroic difficulty, it was much easier, attesting to the usefulness of hero development through the campaign.

You start the map with four heroes at the ends of the four long pathways. Each hero has to take on a garrison (the orange squares) and these battles should be done with the aim of taking almost no casualties. There's no need to converge all your heroes onto the town at 1 because sending one hero in will trigger a battle with all four.

The battle for the first town (Biara) is tougher and you should expect to take some casualties, although these should obviously be minimised as much as possible. Biara (heroic 1.3) casts a spell called "Inferno Chain" when she gets a turn. This spell is similar to Chain Lightning that it hits four units in a chain, but its damage does not reduce through the jumps -- each hit deals full 820 damage. You might resist this magic if you have magic resistance (unicorns, or the Luck feat) If you hide a lot of stacks, Biara might refrain from using this spell, probably because she would hit her own units with it!

You have to cycle through all four heroes to defeat Biara, in the order of Godric, Findan, Zehir and Raelag. Towards the end of battle, remember to use the archangel's Resurrection ability and the hero's Resurrection spell with any heroes that have it. These battles will give you a taste of the style of battle on this map which involve a lot of creatures getting summoned, both at the start and as you kill certain entire stacks.

Out of these four battles, the one involving Zehir will be the easiest as you can simply "Banish" (gained through the Summoning Magic Feat) almost all stacks of Inferno units. It is so cheap that you would think it is not fair for Biara. In addition, Raelag will have an easy time as his meteor shower can make short work of the closely packed summoned enemies, and his black dragons are immune to Biara's spells. Be careful with Findan and Raelag's dragons, as the AI is smart enough to trigger their counter attack that will also plow through your own units. Try to isolate them from your other units.

Once you win the four battles, which isn't too difficult, all your heroes will be teleported to 2 to prepare for the final battle. All units lost are lost, though.

If you have used any spell points in the previous battle there is a magic well at 3 which can replenish them. The final battles are for the control over the shielded town at 4. There are two phases to the battle, each fought by all four heroes in turn, for a total of 8 battles. There are no rest in between, so if you lose, you have to restart from the beginning.

The first round ends when you destroy the magical wall which is a central feature of this battlefield. The wall usually takes three catapult shots to destroy, though this will be less if you have war machines or get a successful luck roll on your catapult's attack. Your objective in this first battle is not to kill all the enemies, it is to defend your catapult because if it gets attacked by an enemy you will lose the battle. So hang back and keep your creatures positioned so that a large sized enemy (eg. bone dragons) can't attack the catapult because they seem to do so if they get the opportunity. You should also, obviously, try and keep casualties to a minimum because there is one more battle before you finish the map and the campaign.

If you feel like your creatures are dying more and killing less than they normally would, then take a look at the demon sovereign's stats, which were all in the mid 40s. This is the reason that the second round of the battle can be a bit difficult for Zehir and Raelag. Fortunately, Zehir can always Banish them in one go, and Raelag has powerful spells to achieve similar effects. 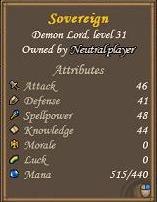 I think I found a combat set up which should be able to get you through the final battle no matter how weak Zehir is, just in case you cannot Banish. As I noted earlier, Raelag has the easiest time of these battles with his powerful direct damage spells. He also happens to have an army which can take a lots of beatings, with scores of hydras and almost 50 shadow dragons. So for starters, switch Zehir and Raelag's armies, but make sure there is one space left in Zehir's army (leave the blood furies out if anything, they die very easily). I found the key to keeping Zehir alive, on top of this, was Findan's 50+ Ancient Treant stack, so fill up Zehir's final slot with them. You should now be able to win the final battle. In each round, place the treants in the corner and do nothing with them except hit defend. Their special ability gets them unlimited retaliation if you do this which is great, because you'll likely have poor morale and so otherwise would almost never get a chance to attack with them. In the first round, place the hydras and black dragons on the two slots next to the catapult to defend it (I found the hydra stack usually died, this didn't matter too much). In the second round, do as much damage to the Cerberus and Succubus stacks with your dragons and other creatures before they die (them being the only creatures your treants can't retaliate against). Then use raise dead to keep your treants healthy and summon elemental to do some extra damage. You should be able to win this battle by doing this. If you don't, then the strongest stack behind the shadow dragons is either the titans or archangels, depending on how many casualties you took in previous battles, so add them in, though the morale penalty will be pretty annoying with three alignments in the army.

Once you win, then that's all, there isn't anymore... except one last round of bad voice acting and another 'unexpected' twist in the final cutscene :). The HoMMV campaigns are finally over and hope you have some favorable moments along the way!