CH →
Walkthroughs →
The Warlock → The Clanlord
﻿

The Warlock → The Clanlord

You would probably be disappointed if the Warlock campaign walkthrough was not written by Infiltrator. I'm happy to announce that our resident Dungeon expert is back to guide you through those missions. The first map, The Clanlord, is an inovative arena-style map where you must train you hero before a grand battle. Infiltrator suggests a way to get the most of that one month period.

There are several other walkthrough articles on the way, so we should have a full set soon.

The Dungeon Campaign feature the Warlock, a typical Magic hero that utilize its destructive power to extreme. The story begins with The Clanlord, where you control Raelag, an obscure new Warlock who hopes to claim the throne of Clan Shadowbrand (which lost their Chief recently). In order to do that, you must defeat the seven other candidate warlocks after exactly one month of build-up.

You and every other warlock are sealed off and given a month to prepare. Once a month has passed, you will all be teleported into the underground, and fight each other to the death. The winner, of course, will be the last man standing. Now, onto the walkthrough.

As usual, you can choose one of the three starting bonuses, including:

Go with the Assassins, the other bonuses are not worth the extra boost the Assassins will grant you in the beginning. Raelag starts out with Basic Defense and Vitality, not my first choice when building a Warlock but his specialty - Intimidate, compensates it more then enough. Intimidate works the opposite way as Agrael's specialty, by lowering the enemy units initiative (instead of raising your own) as your level goes up. It ensures that Raelag will have a lot of turns to cast his spells.

The other four skill slots are open for your choice. On lower difficulties you will be fine anyways. However, you MUST have either Destructive or Summoning magic on high difficulties, as in mission 3 and 4 you'll start with very little army, to combat very large forces right from the start. Later on, mission 5 is mostly based on huge forces, so a Might-build would do a better job there. Even so, Mission 3, probably one of the most difficult missions among all, is where everyone's headache comes from.

Patch 1.3 toned down Meteor Shower, and made high-level spells much more mana-costing, so even the Magic route would become far more difficult now. The only good news is that Warlock's Luck now affects Empowered Spell -- but there probably won't be enough mana to cast them daily. (e.g. 38 for Empowered Meteor Showers, the weakened version!) Sorcery would be very useful as it gives double mana regeneration rate, and discounted mana cost (both Arcane Training and Erratic Mana).

Although the map size is huge, you'll only see 1/8 of it. Your opponents are working hard on their 1/8th of the map, and so should you! (Actually the other heroes stay idle all the time, but that doesn't mean they will be weak.) 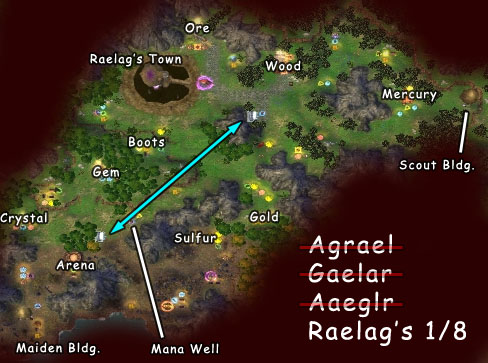 Your 1/8th has one mine of every kind, a stat bonus arena, and a few artifacts. The neutral creatures guarding the buildings vary from game to game. The only thing fixed is theor tier level, and the first group of Imps guading the Ore Pit just north of your town. If you are lucky, you will get a lot of slow-walkers (e.g. zombies, golems, footmen, spectre) that you can easily defeat with blood maiden / fury and a little patience. These fast ladies can act twice while the enemy only acts once, so you can run them back and forth, to let Raelag slowly finish off the enemy. If you are unlucky, you can get almost exclusively ranged units guarding virtually every dead end. If the latter happens to you on heroic, restarting the mission would be a wise decision on Day 1! 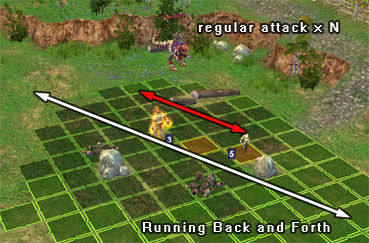 The Tavern is disabled for your town, so you'll have to trek back and forth with Raelag to get new troops. Start by building the School of the Unseen Hand (Scout building), followed by the Level 1 Mage guild, and then proceed to make the Blood Arena and consecutively its upgrade. Now you can face off most of the melee units guarding the mines. The Boots of Swift Journey located just south of your town is guarded by level 2 creatures. If you get archers there, then leave it till you get Deep Hydra. (You know what to do, right? Just deploy the hydra and keep them waiting.)

You will be short on resources, so you have to decide on what creatures buildings to have. Other than the very useful Blood Fury, the Dark Raider and the Deep Hydra can make a large difference. Minotaurs are a little too slow and vulnerable to make a difference. The Shadow Witches are a little expensive (building and hiring), but they are very powerful nontheless. It would be wise to build up the mage guilds as long as Raelag can learn from it. Meteor shower used to be the all-time favorite (level 4 spell, requires Advanced Destructive Magic). If you cannot afford the castle walls, then don't bother. You will have enough creatures to pass the mission.

There is a set of two-way portals (blue arrows in the minimap above) that might save you some travel time. A mana well is conveniently located close to one of its exits.

Clear out all enemies, even if it's just for the sake of experience, but be wary of creatures such as Magi, Druids, Sucubbi and Hunters. If you pick Attack followed by Tactics, your furies can reach them in their first turn. (However, on high difficulties they will surely survive and revenge on your furies.)

Once one month has passed, you will be warned, and the next day, teleported to an isolated location where the only option is to go into a one-way entrance teleport. You lose control of your town now, so if you've picked Elemental Vision, it stops functioning for now. Walk into it and you will be teleported with all the other warlocks in an underground arena. Here, I suggest you head immediately to the northern part, let them kill each other and then finish off any of the survivors, as if you fight too many they will kill your Blood Furies with spells and you will lose a lot of your damage output. If you feel like "The Man" then just rush in and kill them all! Most heroes are actually very weak. If you have conserved your troops well, you'll have no problem to finish them all.

Once you are done with them, the Dragon guarding the exit will disappear, and the Ring of the Shadowbrand will be yours for the taking! 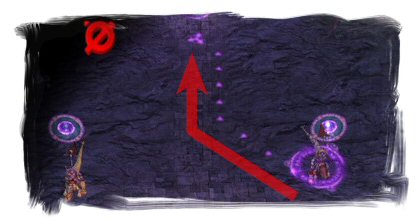