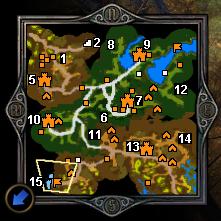 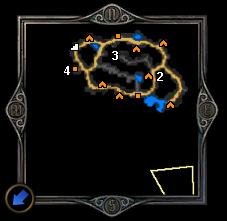 Spoiler: view a screenshot of the surface (1.6 MB)

Once again, none of these bonuses are worth much in the greater scheme of things. The four Rajas are probably the best pick here as they can stay alive while you kill the enemy off with your spells, such as a phoenix. Endurance is a pretty useless spell for you and one which you'll have plenty of opportunity to learn on this map if you haven't already. And you won't want to be casting lightning bolt either, though if for some reason you've learned chain lightning or really like to cast direct damage spells, feel free to take the trident.

The difficulty of this mission and the next hit a record low, which is ironic considering how many powerful heroes will be participating. Neutral stacks contain even fewer numbers than the campaign's first mission, such as "15 assassins" on heroic (sounds insulting, indeed). There are no good default armies featured in AI's towns, either. 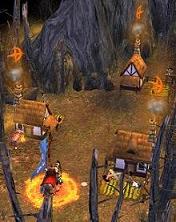 This map feels a bit like the missing sixth map of the Haven campaign. Not only do you get Godric back, but three out of the four towns you can capture are haven and all of them can be fully developed. So you'll be running around with Haven troops and a high level haven hero which is slightly odd for the middle of an Academy campaign. This is also a map which quite a few people seem to get themselves stuck on prior to patch 1.2 (due to bugs), so pay attention and make sure you do things in the right order!

Head along the path east. If you turn south, you can pick up 66 available peasants. If you prefer a speedy conquest then you can ignore them, and take your first town a few days early. The garrison is not supposed to be fought now. Your first objective is to free Godric from underground, and there's a little sign here pointing towards his dungeon. The army in the garrison is meant to be very difficult to defeat with your starting forces, but if you built your Zehir right (pheonix, resurrection, puppet master, etc.) then it is still managable. So ignore the garrison for now and keep going east to take the stairway down.

Once down there head straight east, flagging the mines as you go. Veer south with the road, until you hit 2 where the prison sign is. Turn west and at the end of the passage at 3 is Godric's prison. Release him and give him the peasants if you have.

You can send Godric west to flag the Haven creature dwelling at 4, and take Zehir the long way around the underground (east then over to 4 via the southern passage) to pick up all the goodies. You'll be much more starved of resources than experience on this map, so be sure to pick gold over experience.

Send Godric above ground as soon as possible, and enter the garrison. The troops in the garrison will join you (the only time on the map that any Haven troops do, though) and you're ready to start the main part of the map.

Godric should head over and capture the town at 5 while Zehir is still coming out of the underground. Once he's done that where you send your heroes is pretty much up to you. There's no pressure on this map at all and you can complete the objectives at your own pace. The only thing I would keep in mind is that you will be quite resource short, so don't get the upgrade buildings yet. You will also not have enough money later to buy all the available creatures, so you can actually ignore two out of the four Haven towns (<5>, <7>, <9>, <10>).

Since there isn't any significant AI army out there, you can send out Godric very soon. Whenever you go to 11 and visit the Redwood Observatory, Findan will join you and the mission becomes even easier. With Findan you can capture the remaining towns in a week or two!

You might find that you have a lot more resources than gold - the trading post just near the town at 5 is a great way to convert those resources. There are a total of 3 Sylanna's Ancients (level up tree) on this map, in 6, 12, 14, so you can skip a lot of small neutral stacks. The area at 8 is probably the most useless detour of any map ever seen - nothing there but a Stable at the entrance, and some not-so-good views.

You should be getting quite proficient with using Zehir's summoned phenix by now, for two reasons. First, you get some pretty images: 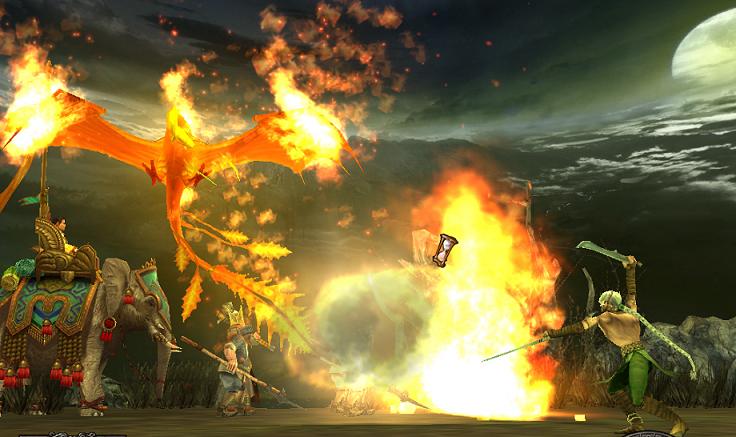 And, more importantly, a creature with incredible stats: 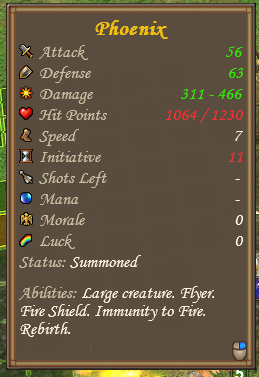 The phoenix is very durable, but it has a weakness to wraith's (the glowing upgrade) Harmful Touch or a pit lord's Vorpal Sword. Don't lave the pheonix within their reach. Here is a fairly evil combat set up to get the most out of the phoenix: 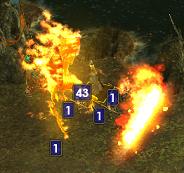 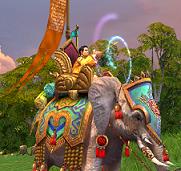 It's a little tough to see there, but it was a stack of inquisitors in the corner surrounded by three 1-unit peasant stacks. I kept my larger stack of peasants off the battlefield and a backup stack of crusaders off too. Put a firewall in front of these units and a phoenix next to them and you're practically invincible. If a peasant dies you just get an elemental stack in its place (thanks to Zehir's ability) and between the firewall and the phoenix nothing survives long enough to get through to the inquisitors, who cast haste on the phoenix and then shoot any survivors. Against strong shooting troops, you can make sure your phoenix travels the battlefield in one turn by making sure there isn't enough room for it on the two back rows (where the phoenix normally summons). Even if you only have small sized creatures, you can block all the space off by spreading out the creatures two spaces apart on the 2nd last row in the tactics phase.

Once your hero has captured 9, you might want to send him on a boat to 12, where there's another Sylvanas Ancients, a hill fort to upgrade your creatures and a most-welcome gold mine. There is a fairly useless Necropolis town at 13 (don't build anything except a town hall, plus some mage guilds if you're looking for spells). There are two gold mines to the NW of the town, plus an artifact merchant.

Once you've explored the map, hit the level caps and sent your hero's around to gather as many stat boosters as you feel like (there's a couple of useful spellpower boosters around 13), then get ready for the final battle at 15 which is a 3-stage attack. Zehir and Godric each fight Markal on a normal battlefield then Findan finishes him off in the town. You don't need to do anything to make each of these battles happen (except walk towards the town at 15) but if you have not found both Godric and Findan the game will crash at this point.

These battles are not very hard, but you should bring as many creatures as you can afford. Turning peasants into marksmen is a good idea if you can afford it. Markal may cast puppet master, which can get annoying, particularly on your phoenix, but it is not a problem if you have expert-level Mass Cleanse (Your sprites' cleanse level is too low, so forget about it). (Markal does not cast it always. Sometimes he does nothing but regular attack!) Actually, there are better things for Zehir to do (after Mass Haste and Mass Slow) -- Banish. It is a feat to be picked up in Summoning Magic. With one Banish, you can instantly unsummon ALL of Markal's summoned creatures on the field!

You can split your Haven armies in three parts. Among them Findan will face the hardest challenge (a castle assault), so flying and ranged units are most useful for him. Your priority in these battles is to kill the starting troops. Ignore the undead summoned along the way - they all disappear when the starting troops are all gone. Once you finish each of these battles (if you lose, just wait around another week or two to build up your forces - there's no time pressure) you're on to the next map.