The Mage → The Defiant Mage

You will be in good hands if you're about to start playing the Academy campaign: Psychobabble posted the first of a series of articles about The Mage. The Defiant Mage is the first part of an easy campaign, even at Heroic. However, you have to play it a certain way if you want to get the most out of it, especially if you want to avoid a particularly difficult final battle.

Psychobabble provides tips for the starting bonus, hero development and the path you should follow, and includes a handy minimap with markers. A second article will follow up soon.

Before I begin the walkthrough proper, I wanted to give a quick overview of the Academy campaign because it’s a bit of an odd one. Throughout the course of the five-map campaign there is precisely one map where you get to build up an academy town – the second map. For the last three maps, your best hero isn't even likely to be Zehir (the putative protagonist), but some of the main characters from the previous campaigns.

Prior to patch 1.3, it's also, on the whole, a very easy campaign – even on heroic – however the final battle is against a very high level hero with stats in the mid 40s. To be able to win this battle without a lot of fiddling and re-loading (and due to the nature of the final battle, you really don't want to be re-loading) you should be building up Zehir – your weakest character for the final map as much as possible. Patch 1.2 removes the stacking nature of elementals, but gives you fresh spells for water elementals. Patch 1.3 roughly doubles the mana requirement for high-level spells, making the first two missions quite more difficult.

Finally, because it's possible to do so, I attempted to get Zehir the ultimate Academy skill (Arcane Omniscience – see the skill wheel if you don't know what I'm talking about). I failed in my first run through (hard difficulty) but I'll hopefully succeed on my second time through (heroic) while I write this walkthrough. However, by the time Zehir gets Arcane Omniscience, the hardest part will be long over, and your other heroes can usually still do a better job than Zehir. Therefore, you will have an easier time early on, if you simply Zehir to suit your low-level needs.

Anyway, enough of that... here's the walkthrough for the first map! 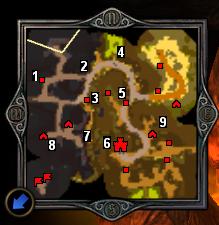 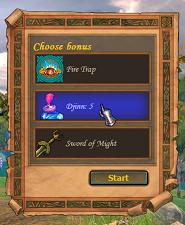 The choice of bonus here is a pretty easy one. You're fairly starved for creatures and while they're a terribly weak tier 5 creature, five djinn are a reasonably useful addition to your army.

You have two primary objectives in this map and there is also an undocumented goal you might want to go after – the summon phoenix spell, which might be available in the town's mage guild. Getting this spell early will make the next part of the campaign much easier and I mention this now because you'll want to get your hero expert summon magic ASAP to learn this level 5 spell. On patch 1.3 each pheonix costs you 35 mana(!), so early knowledge points seems to be very important for Zehir now.

The first thing you'll notice on this map is that your army is pretty weak. Unfortunately it's not getting much stronger any time soon. Luckily your hero is an elemental summoning expert and with a few little tricks you can get through this map without too many problems. First thing you might want to do is run up the road to the north and flag the horned demon dwelling (at 1 on the mini-map) to give your weak army a little boost. Follow the road to the east until it hits a crossroad (2). Your goal in this stage is to preserve your army and level your hero up a bit. But, and this is reasonably important if you want to get the most out of the map, do not let your hero get above level 7. Once you're at level 6 or so then I would recommend that you stop attacking non-essential stacks and take gold instead of experience from chests. I'll explain why later. Also, this is the time to decide whether or not want to go for arcane omniscience because selecting any skill off the correct path (specific skills in summoning, enlightenment, attack and sorcery) may make doing so literally or practically impossible. It's probably not the most powerful path to take, but it is a fun goal to pursue throughout the campaign.

Do not attack any stacks which will cause you significant casualties, so stay away from any cerberus or succubus stacks. For the weaker stacks a little trick which will help your army survive is splitting off some one-unit stacks off your gargoyles. Thanks to the hero's special ability you get a few elementals when a stack dies, regardless of their size. You can split the stack up in the tactics phase of the battle by shift-dragging the unit in the ATB br like this:

Add the creatures back to the battlefield after splitting them off. Sending out one or two single stacks of gargoyles will slow the enemy down with summoned elementals and let your gremlins and main summoned elemental stacks do the damage.

Note: Patch 1.3 introduced a new bug that you sometimes lose an entire stack that was not even deployed in battle, if you split a stack to its position and rearrange them during battle. To avoid this bug split your stacks before the battle takes place.

When you hit the crossroads head north. You can pick up some skeletons from the dwelling at 3; further south you can visit a stat+2 arena, which is quite useful this early. When you follow the paved road north, don't miss out the mana well, which will be Zehir spiritual food for this mission.

Ghosts, like the stack guarding a spellpower booster at 4 might seem tough, but they die very easy to the ice bolt spell and, handily, all the ghost stacks round here are on swamp terrain which allows Zehir to summon water elementals (casters). Keep following the road around until you hit the gate at 5 and remember to stop acquiring experience if your hero is about level 6.

Once through the gate with minimal casualties (elementals are your friend) head to the town at 6 which is one of your primary objectives. There are usually two heroes guarding this town (one hero in patch 1.3). If you appear weak enough they might come out to engage you, or one might just run past, which is nice because the town has a castle built. If it isn't day 7 of a week it might be worth hanging out near the town for a day just to see if you get attacked. On 1.3 heroic you are guaranteed to be attacked, but after winning this tough battle you can occupy the defenseless town.

One time when I encountered the enemy hero they were all weirdly bunched up (see picture- there's creatures in every single one of those positions :) which made for a very lucrative circle of winter and a much easier battle! Also, the battle against the town can be won with just a handful of creatures. For instance I split my 8 remaining gremlins up into 7 different stacks (I had already killed the tougher hero outside the town). For some reason this made the castle defences attack my catapult, to little effect, while my summoned water elementals made short work of the defenders:

Once you capture the town the second phase of the map should begin, assuming you have kept your hero's level low enough that the map doesn't end at this point (if your hero is or becomes level 10 when you capture the castle). If you're lucky – and you have a 50% chance – then the town will have summon phoenix as its level 5 summoning spell which is very useful to have.

If you will be leveling up to the cap by defeating the stacks guarding the bonus, you can transfer all your creatures to a secondary hero who should also get as many undead troops as possible. Send this hero to clear the guards from the offence/defence booster at 7 and the spellpower booster at 8. While you’re there, pick up the mercury mine. Once you've got these two boosters you can either end the map by levelling up your main hero – there's plenty of places to do this – or wait for a few weeks while you and collect enough resources (and gold to turn into resources, from chests and your town) to build the rather expensive level 5 mage guild. There's nothing else of interest, not even through the the oh-so-scary portal of "infernal danger" (9). If you have the patience, though, getting summon phoenix is worthwhile because there's no guarantee that you'll get it on future maps (I didn't in my first run through and I built every possible level 5 mage guild).

Note: The other level-5 spell you can learn here comes from the Dark magic school. Try to achieve Expert Dark Magic here so you can pick it up! (and hope it is Puppet Master)