CH →
Walkthroughs →
The Necromancer → The Lord of Heresh
﻿

The Necromancer → The Lord of Heresh

The cape of the lion’s mane is worthless as it increases moral, which the undead are immune too. Which of the other two you want depends on your preferences, although I think the Liches are better for the final fight you have to on this map.

Guess what, you are going to fight Godric! 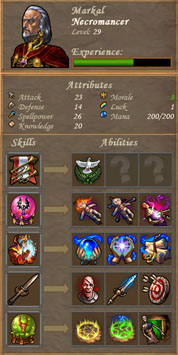 The old general can be tougher than the final campaign boss, depending on how much, and how well you have developed him in C1M5, and C3M2. Godric's army builds up very quickly, so you better fight him as soon as possible. Hopefully, you have built your Markal to become a never-stay-dead Necromancer. Here is an example on the left:

Fortunately, this map is relatively small, as it is basically a zoomed-in version of C3M2. The mines, stat bonuses, and even the Sylanna's Ancient (level-up tree) are all in the same place. Also, if you have learned the Town Portal spell for Isabel and Markal, it will save you quite a few days of travel.

This scenario will be over quite soon, so you can forget about building town upgrades -- just focus on money. Get the Towns Halls and Capital on Day 1 and 2, and then perhaps the Castle Walls to increase your troop production. You can upgrade troops with a Hill Fort south of Lorekeep later, with a discounted price. So it is really pointless to build any upgrade buildings in your two towns.

Note that Isabel's Haven troops starts leaving her to join Godric on Day 2, so try your best not to leave Haven troop with Isabel when you hit End Turn. You really don't need to dismiss her troops, as you can hide them in the castle, or simply swap them to a level-one hero. You can also convert them to undead in Lorekeep, and make Isabel command undead units as well. Just put all armies on Markal for the final boss fight. (Unfortunately, you cannot make Isabel fight Godric in this campaign finale.)

For Markal, get all the troops from the Necropolis, and then head west as fast as you can, while collecting as many skeleton archers as possible. Your goal is to collect a large group of Wraiths half way to Isabel's castle. The Hut of Magi in the north reveals Godric's castle, so send a low-level hero to visit it sooner or later.

Before picking up the powerful reinforcement, you will first meet a large number of Rakshaka. Now it is the time to make the Necromancers proud! Mass Slow, Puppet Master, Frenzy are all wonderful spells to use in this fight. You should be able to avoid losses, since you can always raise them back before the end of the fight. You can cast Mark of Necromancer on the enemy, so your mana is constantly high.

After picking up the undeads, visit the prison just east of Newpost, and collect Freya from the prison (you must visit it with Markal) and then head back along the road towards Lorekeep. You don't have to go all the way back, as... 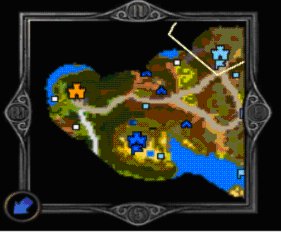 Angels will ambush Markal on his way back. Again, make use of Puppet Master, Frenzy, Blind along with Raise Dead to make sure you take no losses. After the fight, you get an artifact -- the Angel's Wings have been automatically equipped on Markal. This artifact makes Markal "fly" all over the place, and only Markal can equip it. You will eventually use it to access Godric's castle, and you can also use it to fly to the northern islands to pick up stat bonuses for Markal. However, if Markal is going to travel almost exclusively on paved road for a given day, removing Angel's Wings will enable Markal to travel farther.

Now you are actually ready to fight Godric! However, if you have developed Godric into a power house in the past, then Markal is in no shape to win at this moment. You need more army! There are plenty of creatures on the map for Markal to convert to skeleton archers. Also, you can convert Haven troops to undead units back in Lorekeep.

If you want to fight Godric early, try to do it on Day 1 of Week 2. This way, Godric doesn't have time to get a second week's worth of reinforcements, but you do! You can use Isabel to quickly transfer Haven units to Lorekeep (with Town Portal), convert them to join the fresh undead units from Lorekeep, and upgrade them in the Hill Fort with a low-level hero, and ship the units back to Markal, who flies over the mountain to fight. You can do all of these in one day!

If you don't fight Godric on Day 1, Week 2, there will be two Orange heroes coming to you by sea, at the beginning of week 2. One will land close to Newpost and try to steal it from you, while the other will land on the shore just south of the Hill Fort, trying to take your Lorekeep. These Orange armies are not as powerful as the spawned heroes back in C3M3, though, so they are actually excellent sources of skeleton archers. The screenshot below is what you and Godric can look like on Day 5, Week 3, Month 1 (heroic, patch 1.3). 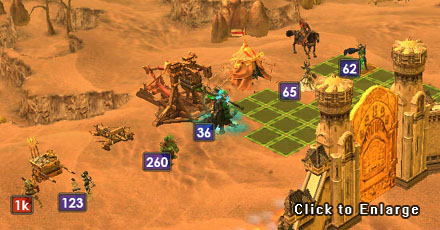 Godric's army consists of a wide array of Academy units. Focus on the ranged units (Titans, Archmages and Master Gremlins) first, and then worry about the other troops. The Titans, although small in number, can hurt a lot! If you have trouble defeating Godric's Academy army, there is something really wrong with your Markal. Either you should come back later with a lot more units, or you have built him into a mediocre Jack-of-all-trades. 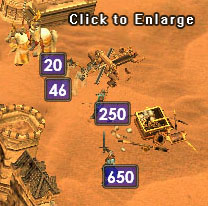 Don't feel too happy when you defeat Godric's Academy army, because that's far less than half of the fight! Godric now automatically summons in Haven troops, within the same battle. If you have no means of regaining mana (Mark of Necromancer, activated by the Spirit Link feat under Dark Magic), be conservative with it against the Academy army. The size of Godric's Haven troops has been drastically increased in patch 1.2, and largely toned down in patch 1.3 (as Markal was weakend significantly as well). The screenshot on the upper right happens later during the same battle, when Godric summons his reinforcement. Note how little Markal's undead army has been reduced to (as Raise Dead is almost useless now).

If somehow Godric's action initiative comes directly after Markal (as in the picture), try not to cast Mass Effect spells as Godric will immediately replace it with his positive (Light Magic) version on his own troops, meaning your action is totally wasted! For example, if you cast Mass Slow, and Godrci casts Mass Haste, then only Mass Haste stays. When this happens, cast some regular spells (such as Puppet Master) to bring your action slightly behind Godric, and overwrite his positive spells then.

You really have to fight hard against Godric's Haven army. On heroic (patch 1.3), it starts with 25 Angels, 10 Paladins, and hundreds of Footmen and Archers. These numbers grow extremely rapidaly. Two weeks later, you will see 50 Angels, 20 Paladins, 650 Footmen and 250 Archers (see picture to the upperr ight). On patch 1.2, you would expect double that number!

A Pheonix (with expert Summoning Magic) can be extremely handy here, and you can actually cast Raise Dead on the phoenix to bring back its HP! (Conjouring a new phoenix costs 28 mana, with Arcane Training, on patch 1.3.)

It is worth mentioning that Puppet Master is now much more effective in patch 1.3 (although it sometimes fails for no good reason), as the puppet effect is NOT cancelled while the target takes damage. This means that if you nailed Godric's Angels for this spell, the Angels will be free-hit for all for about 6-7 turns, if Godric does not cleanse them! (see below) And AI Godric is usually not smart enough to cast what is best for him. 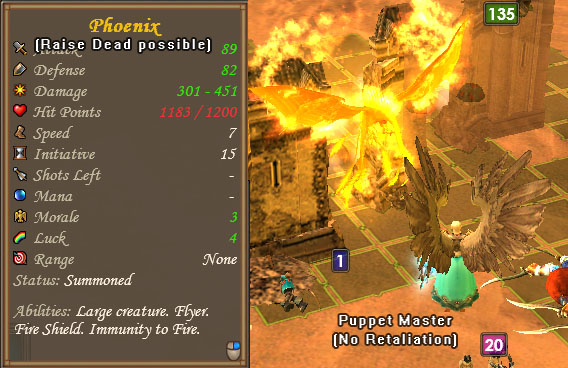 Make your best to Puppet Master the Angels, and kill the Paladins as soon as you can. On heroic, the Paladins get unlimited lay on hands to remove Puppet Master and Frenzy. Since your undeads die pretty fast and come back pretty ineffectively now, it might be just your Phoenix fighting, so keep Markal alive by raising spectres/ghosts and other units here and there. Hopefully, you will eventually outlast Godric and win this campaign. Contgratulations! 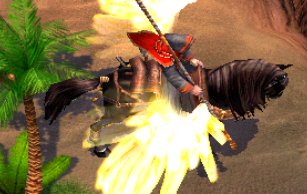 A human designed Godric is probably the most challenging fight you can get in the campaigns. Finally, make sure you have the patch because the fix to frenzy makes a lot of difference, as before if you used frenzy in this fight, you had to use it on an archer unit, since all the melee units just defend.