CH →
Walkthroughs →
The Queen → The Rebellion
﻿

The Queen → The Rebellion 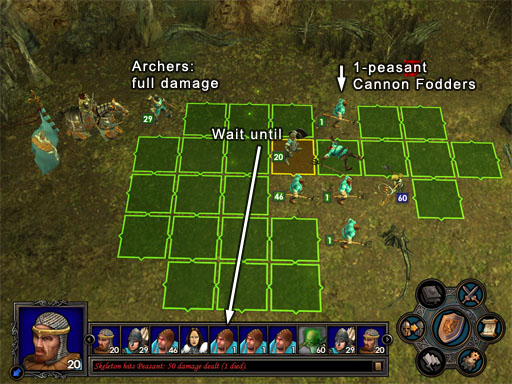 The battle shown above is the first skeleton fight on heroic 1.2. The actual composition of the skeleton army is random. In this case, it is a single stack of 87 skeletons. I split out four mini stacks of single peasant to block the path of the skeleton. Sure these 1-peasant stack will die, but each peasant would buy me 1 round of action to shoot down more of them with my archers. If I don't do this maybe I will take a heavier hit when the skeletons strike my major peasant stack. Also, while the skeletons are blocked by my cannon fodders, they are actually within the full-damage range of my archers. 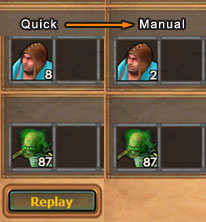 In the picture you can see that my footmen's turn has come up. However, attacking the skeletons right away would result in an inevitable retaliation, possibly killing at least one footman. Since footmen are more valuable than peasants, it is more desirable to let the footman wait, and attack first with a 1-peasant stack, then follow up with the major stacks. By the help of this simple tactics, I successfully cut down my loss from 8 peasants (Quick Combat result) to 2 peasants. The difference might not be much now, but throughout the campaigns the 1-unit stacks will do more wonders for you, and save a lot of army at the end of each mission!

Once you are done enjoying the view inside Strongbow, you can build your first town structure. The campfire immediately west of the town provides resources that are very useful. By flagging the ore pit south of Strongbow you will soon have enough resources to build the archer's tower. You will also need to first have a few other buildings to enable the construction of the archer's tower.

One of the nice buildings you can construct first is the blacksmith, which sells you three kinds of war machines. The ballista is probably the best buy (tm) at this point because it is on a 67% discount in Strongbow. The ballista delivers a small amount of damage on the battlefield. It might also distract enemies for you, but the enemy may also deal enough damage to it to destroy it. Picking up the war machine skill will make them more effective and almost immortal (revives after destruction), which is a great bonus when the enemies do not come in the number of hundreds (they will, eventually).

After recruiting fresh troops from Strongbow, follow the road back North and attack the zombies. That stack of zombies is larger than what you have encountered until now, so be careful. Sooner or later, a cutscene will play and Isabel will receive a new objective: in addition to the 100 archers, Isabel must now conquer the city of Ashwood. Fortunately, there is no time limit this time. Follow the road up to the nearby archer tower and peasants huts (4), recruit the inhabitants and go East. The archers who are guarding the next archer tower might join you sometimes. It is recommended that you stay in this area until you collect 100 archers, because there won't be many archers joining you ahead. 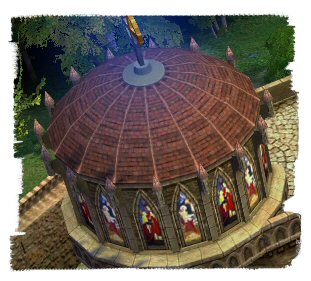 The Marletto Tower (5) to the South is the first structure meant to boost Isabel's statistics. Visiting it will give you one point of defense, a bonus that Isabel will keep for the rest of the campaign. One point of defense roughly converts to 5% less physical damage received, so it is quite a nice life-time bonus. The road will turn East again, but go West instead and attack the skeletons over there. The reason why I am sending you there is because of the Crystal of Revelation at (6), the big glowing thingy, that will give Isabel one point of Knowledge which will, again, carry over to the next missions. Each point of knowledge gives you 10 points of maximum mana, as well as 1 point of mana regeneration per day. Continue to the East as the track will take you back to the main road. Picking up the ten footmen in the barracks on the left might be a good idea. But whatever you do, don't miss the Mercenary Camp on the right (7), the third map location that gives you a permanent bonus, to your attack skill this time. Each point in attack roughly converts to an extra 5% of physical damage.

Continue to the North until you see a second Redwood Observatory, on the right next to the river. Visiting it will give you a better view if the surroundings. Ashwood is on the other side of the river, although you don't see it just yet. Again, follow the road, attacking any creature for experience. The Minotaurs (8) must be defeated as they carry a useful artifact, even though it will only last until the end of the current scenario. Also, don't miss the second Mercenary Camp just east of (8), and the barracks not far to the South. On the other side of the road is a stack of Blade Dancers, who will fall easily to your attacks. Pick up the Sword of Might (attack +2) they are guarding. You're almost done there. Continue to the North until you meet a stack of Griffins, and thank Ubisoft for letting them join you. They will make the final battle much easier. Now would be a good time to quicksave (F5) your game, if you have not turned on auto-saving in the Option - Game menu. Recruit the remaining peasants and footmen, and attack Ashwood when you are ready. The final battle is easier than it looks thanks to the Griffins. Your first priority is to take down the enemy archers with your Griffins and archers. After that you should have a very easy time.

Once Ashwood is taken, you win this scenario. Good job!