Utopia in a Month
Yesterday, 18:34 by Moondragon (136 replies)
in Articles
This method would work even better with inferno troops. Put two imps instead of peasants and then you...

Here is the background story behind nine heroes of the Inferno faction. Click on the pictures to enlarge them.

One of the generals charged to refit Kha-Beleth's prison to better suit his own needs, the demoness Deleb developed an intricate knowledge of machines. Nicknamed "Meat Grinder" by her detractors, Deleb puts unquestioning faith in her own engines of war rather than trusting to fickle Demon troops, whose loyalty is a constant balance between terror of their masters and terror for their lives. 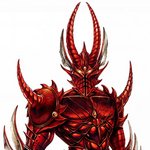 Agrael rose rapidly through the ranks of Demon cultists to become a trusted right hand of the Demon Sovereign. His detractors call him reckless and over-ambitious, but Agrael's measured aggressiveness has made him a feared and respected leader in battle. He will attack when a good opportunity presents itself, and does not hesitate to take risks when the rewards are commensurate. 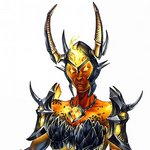 Arguably the most dangerous weapon in the Demon Sovereign's arsenal, Biara is a succubus of legendary skills. With ample natural gifts enhanced by almost masochistic self-discipline, her talents for seduction, assassination, and infiltration are unequaled in all of Sheogh. When the going gets tough, Kha-Beleth gleefully turns to Biara. 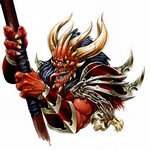 Erasial’s promotion as the Sovereign's "go-fer" was due to two things: his innate indefatigability and the Sovereign’s love for massacre. He is his master’s bloody entertainments manager, driving all manner of game and beings before Kha-Beleth to be slaughtered. The Sovereign knows that if there is a matter that must be handled quickly, there is no better fiend for it than the slavishly obedient and mindlessly brutal Erasial. 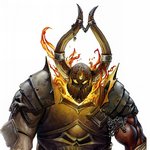 After witnessing the massacre of King Alexei and his knights first-hand during the War of the Eclipse, Veyer decided that overpowering tactics are the key to victory. As a result he has spent much of his existence researching the Infernal Gates and has achieved striking results: the troops he summons arrive much more quickly than they do for other Demonlords. 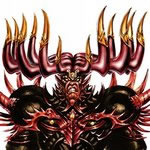 Though Nymus has seen more hours in battle than any other being from the depths of Sheogh, he owes his success more to his own luck and unpredictability. Ruined enemies complain that the powers of Chaos itself are on his side, bending fortune to fit his needs. Having killed his way up from a lowly slave to be one of the great powers in Sheogh, it is certain that Nebiros benefits from the cursed blessings of Urgash. 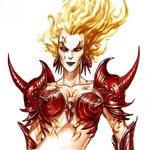 Jezebeth is rightfully proud that she has achieved her high standing in the Demon ranks thanks to her temptress’ talents. Worshipping her as a shining example, Jezebeth's Succubus followers strive to equal her ability to seduce and murder for the glory of their Sovereign. 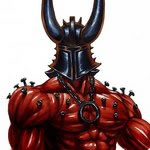 Wherever Grawl goes he is always accompanied by a baying, slavering pack of Hellhounds or Cerberi. These creatures are the only things for which Grawl has any sympathy, and he protects them as if they were family. Some dare to snicker that they are indeed relatives, though anyone who dares to attack or even mock Grawl will find himself torn apart by the razor-sharp fangs of his devoted beasts. 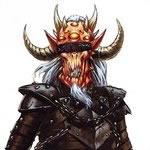 Alastor showed his skill at mind control at a tender age, as his childhood enemies took to wandering inexplicably into lava flows. Delighted by this precocious display of talent, the Sovereign permitted Alastor to study the arts of mental domination under the masters in Sheogh and later across all the lands of Ashan. Many a time have enemy troops, mesmerized by his gaze, come over to fight at the demons’ side.