Might and Magic 6, 7, 8 merge based...
38 minutes ago by Caligula Wellington (6196 replies)
in Might and Magic
So, when adding mods like armour, etc. In which directory am I supposed to put them? I can't find any...

Here is the background story behind ten heroes of the Haven faction. Click on the pictures to enlarge them. 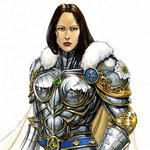 Only child of the ruling family of the Greyhound Duchy, Isabel was brought up in isolation surrounded by nannies and servants. Now that war has come, the young Queen feels driven to go to the aid of the Empire. Dedicated to her goals, Isabel exploits the few things she has – her wealth and nobility – without hesitation. 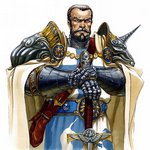 Godric is rightfully upheld as a model knight and sterling example of chivalric ideals. Demanding the highest standards of courage and integrity from both himself and his followers, Godric commands respect wherever he goes. Troops under his banner trust him without question, as his history of great deeds and his favor in Elrath's eye convince them that his mere presence upon the battlefield can guarantee victory. 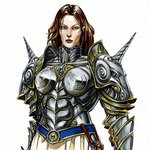 “Strike like lightning” is Freyda's motto. During her years as a student at the Imperial College of Strategy she often surprised her instructors with daring solutions based on forced marches, surprise attacks and rapid outflanking. At heart, Freyda is always impatient for the next battle to try some new twist on her favorite tactics. Though some murmured that she was promoted because she is Godric's daughter, a string of victories and exemplary leadership have silenced even the most cynical critics. 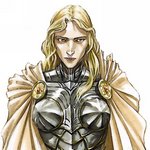 Brilliant but embattled, Maeve is a dedicated ruler working desperately to pull a doomed empire out of its downward spiral. Trying to salvage a future for the fragmenting Falcon Empire while fighting off a Demon invasion, Maeve has nothing to rely on but her own dedication to the ideals of chivalry and her unswerving faith in the worship of the Dragon of Light. 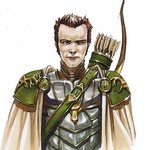 As dedicated as his comrades to the glory of the Griffin Empire, Dougal's loyalty is balanced with a strong dose of pragmatism. Believing that the best enemy is one that is dead before he can lay a hand on a Griffin soldier, Dougal has specialized for many years in the training and equipping of archers. The shooters return his faith, believing that little can endanger them while Dougal is in command. 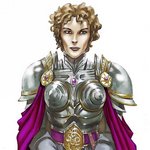 Ellaine served honorably in the Imperial army during the War of the Eclipse and then returned to manage her family's estates in a wise, compassionate, and just manner. Though it had been poorly kept her steady hand yielded fruit: the manor grew and prospered. Now that Ellaine is back at war, the peasants remember her good deeds and show miracles of bravery at the battlefields under her command. 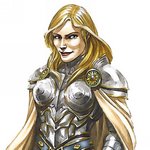 Irina's earliest memories are of griffins, as she was born into a respected family of griffherders. She grew up knowing the ins and outs of those proud and dangerous beasts, and when called to war for the Empire she readily brought her gifts to bear where she could do the most good. Irina ensures that the griffins that fight by her side are exceptionally healthy and respond well to commands. 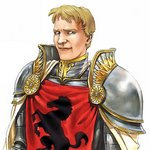 Rigorously trained but coming from a poor noble family in a backwater of the Griffin Empire, Klaus might have remained unknown if luck had not smiled upon him. Thrust into the most difficult level of a jousting tournament through a simple accident of misfiled parchment, he stunned the crowds by unseating some of the greatest names of the Empire. Since that day, his feats have earned him the devotion of all mounted warriors. 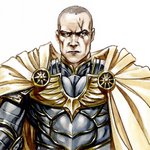 Fighting his way up from a lowly birth with a certain grim resolve, the ordeals that Laszlo has endured have hardened his heart. Covered with scars, stern and ruthless, he hews his way into the enemy ranks like a force of nature. The “kings of battlefield”, as he proudly names his infantry, have little choice but to follow their commander, causing – often involuntarily – extraordinary feats of bravery. 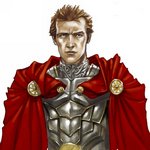 Rutger was mostly known as a vagabond, free spirit, and traveler before the call to arms brought him into the ranks of the Griffin Empire's Wolf Duchy. Using the knowledge gained during his more carefree years, Rutger exploits every path, trail, and shortcut to speed his troops from battle to battle. The sooner he finishes the war, the sooner he can return to the roads that still seem to call his name. 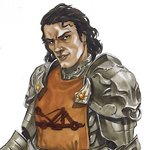 A veteran of many skirmishes with the tumultuous Free Cities along the Griffin Empire's southeastern border, Vittorio is an expert in the art of the siege. He has spent years perfecting both the design and use of siege engines, firmly believing that countless Griffin lives can be saved by improving their battlefield technologies. Though his radical designs sometimes create unexpected surprises for the teams that first test them, it is agreed that his equipment is second to none.