The portraits and bios of three Academy heroes are available here for your viewing pleasure. They have been reprinted from the official Might and Magic portal.

Let's hope we will be introduced to more heroes next week. Here is the background story behind eleven heroes of the Academy faction. Click on the pictures to enlarge them. 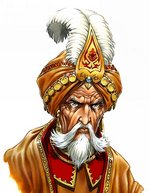 Cyrus was destined for greatness, as from an early age he showed the combination of natural talent and intense competitive ambition that leaders often possess. Mercilessly fighting his way to the top, Cyrus became a young and dynamic First of the Circle. Though over time his brilliance faded under the weight of a huge ego and a tendency to avarice, Cyrus remained a Mage of impressive power. 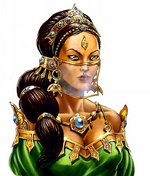 Jhora’s quickness of mind gives her the ability to launch magical attacks at a pace unmatched by any of her fellow mages. The first beings to discover this were bandits, who made the mistake of attempting a surprise attack on a caravan in which Jhora, still a child at the time, was riding. The sudden flurry of Eldritch Arrows that fell upon the attackers sent them running for the hills. 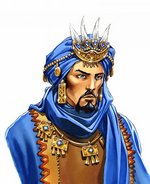 Maahir is not unique among Mages for the intensity with which he studies; however he is quite unique in the way does it. A seasoned traveler by anyone's standards, Maahir forces his body through endless hardships in the belief that exceptional mental endurance goes hand in hand with exceptional physical endurance. As a result of his stamina and his mental focus, Maahir is capable of renewing mana at an unusually fast rate. 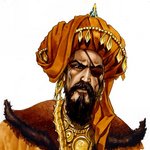 Havez has an eye for anything that is quirky or odd. His personal effects are an unusual mix of items from all over Ashan – shadow silk cloths from Ygg-Chall, leatherwork from Irollan, jewels from the Dwarven mines, etc. His interest in the quaint and curious extends to his troops as well; he has for many decades studied the Gremlins and specializes in the upbringing and training of these lizard-like humanoids. 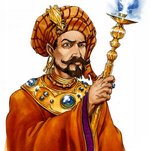 Narxes is a firm believer that the roots of success lie in precision, thoroughness, and attention to detail. A stern and pedantic taskmaster, he is the bane of acolytes studying to become Mages. They do not begrudge the hours spent under his unforgiving eye, however, as he shows them that the harder you train in peacetime, the less you suffer in wartime. 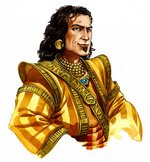 Excitable, headstrong, and energetic are the sorts of words the older Mages use to describe Zehir. He chose to master elemental magic, figuring (correctly) that if he could control beings as fickle and powerful as elementals he would be well prepared for any magical struggle. Though the title First of the Circle was granted to the young Mage in the hopes of staving off political infighting during a crisis, the other wizards of the Circle quickly realized that it was only a matter of time before Zehir's skills surpassed theirs – time that is more likely to be measured in months than in years. 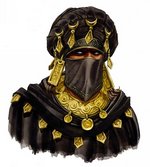 Faiz is notorious in the Silver Cities for his gruesome countenance, which he usually covers with a scarf. His scars are the result of an encounter with Desert Orcs, and from that day the once light-hearted Mage turned himself to thoughts of devastation and ruin. Mastering these arts, Faiz has gained the ability to inflict intensive arcane destruction upon his enemies. 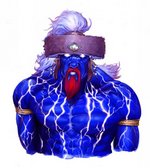 Galib is a Djinn, a spiritual being, lord among the many elemental spirits that roam the plane of magic, invisible to the untrained eye. Galib is not a servant, but a friend and ally to the Mages of the Silver Cities, and he sits as one of the Circle in the Wizards’ ruling council to defend the interests of his. Many of his human counterparts have learnt to randomly deflect enemy spells, but Galib’s inherent magical nature permits him a measure of control over where the deflected spell goes. Enemies avoid using magic against him, knowing that Galib could cause their spells to bounce back and strike their own troops. 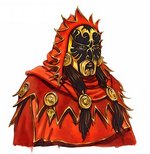 During the War of the Grey Alliance, Nathir was taken prisoner by the demons. Enslaved in their sulfur mines, he was one of only three survivors of a massive prison uprising and escape. Nathir made his way across the fiery wastes of Sheogh and finally back to the Silver Cities, vowing from that day on that fire would be his servant and never again his master. 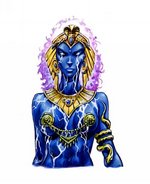 Nur is one of those beings that not only wields magic, but is inherently magical. A Djinn master of meditation and mental concentration, Nur's battles with Chaos magic across many worlds has led her to develop her intellectual capacity to a state of incredible resilience. As a result of study, practice, and preparation, Nur is capable of constantly replenishing her own arcane energies. 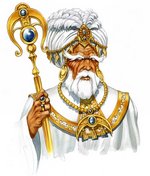 Wisdom does not always come with age. After decades of study, Razzak attempted an experiment that would have permitted him to tap permanently and effortlessly into Asha's magic. He was lucky to survive, and now is blind, partially paralyzed and must be carried by slaves. The experiment did have positive effects as well, though, as Razzak devoted himself to the crafting of Golems to help him as semi-autonomous hands and legs.