Might & Magic: Era of Chaos
27 minutes ago by Pol (108 replies)
in Era of Chaos
And the login error from tomorrow continues and now I'm also affected, as being kicked out at our regular...

Might and Magic 6, 7, 8 merge based...
Today, 03:53 by BMJedi (5014 replies)
in Might and Magic
@Templayer, It appears that the mod creator anticipated and worked around the potential archdruid quest...

MM7Rev4modR1 Redone
15.02, 16:07 by DaveHer (7 replies)
in Might and Magic
Two more maps have been done Barrow Downs and Mountg Nighon. Only one left Shoals. See pics. They...

Is Armor Worth It? Interesting Numbers
14.02, 17:03 by Bandobras Took (20 replies)
in Might and Magic
Well i quoted it just because i remember mm7 better than 6, but point remains same, mm6 have same level...

[MM7] questions about modding and...
14.02, 00:30 by DaveHer (4 replies)
in Might and Magic
but I think, not sure, that the game has a limit as to how many maps it can handle.
I suspect Scripts/Structs/After/RemoveMapStatsLimit.lua...

The French version of the Might and Magic Portal introduces us to four Dungeon heroes. I'm very proud of the English translation I did in less than fifteen minutes, which you can read here. You can click on the images to get a larger version.

Let's hope that the Ubisoft Web team in on a roll and will show us heroes from the other factions as well. Thanks to vyse from the Archangel Castle forums for finding the update. He is the background story behind ten heroes of the Dungeon faction. Click on the pictures to enlarge them. The French version of this report can be found here. 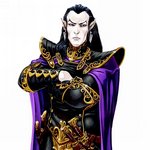 Nothing is known of Raelag’s past, and though he is direct and ruthless in battle his plans and tactics are kept as secret as his personal history. Because he often out-thinks, outflanks, and outmaneuvers his opponents, they move with a great deal of hesitation when facing him in battle. When up against this wily and intimidating warrior, his enemies often find themselves second-guessing their own plans. 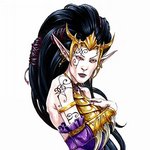 Shadya's family was killed off early in the succession wars of the Soulscar clan. As the sole survivor, she has dedicated her entire life to revenge. Training herself in every art that could further her vendetta she disappears for months at a time, resurfacing only to cross another enemy off her list. One against hundreds, Shadya has mastered all there is to know about infiltration, evasion, assassination, and subtlety. 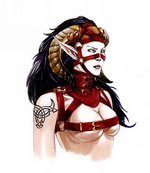 Kythra is one of the wealthiest leaders of Ygg-Chall. The source of her money is no secret, as she gets it from a business in minotaur slaves that has been in her family for generations. The slaves form the backbone of her formidable army as well; those chosen to become warriors must first pass through a bloody and often fatal school for gladiators. 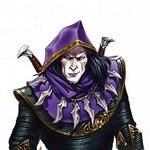 Vayshan is famous for daring sorties to Irollan, where he makes grim sport of hunting his Sylvan relatives. The reasons for his hatred are unknown, but his troops share in his obsession. Joining Vayshan for a hunt in the forest lands is an honor for his dark scouts and assassins who surpass themselves in the hopes of winning their commanders’ approval. 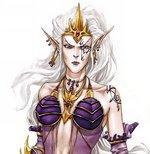 Eruina is a true daughter of the legendary Queen Tuidhana. Though Eruina herself does not flaunt her prestigious bloodline, preferring to be judged on her impressive abilities, the Shadow Witchs and Shadow Matriarchs of her army support her attacks with all the fury of true fanatics. 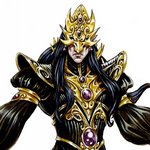 The warlocks of Ygg-Chall are dark and shadowy wizards, and Sinitar is special even among this strange group. Not only can he empower spells, but his skill is such that he can do it while using less of his own mana. No one is sure how he came to have this ability, but the scars on his face tell of bargains with the dragons of shadow - bargains that can take a heavy toll on both body and mind. 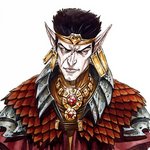 Sorgal's skill in raising the battle lizards of the Dark Elves comes not from gentleness or empathy, but from a merciless culling of the weak and a training regimen that even the strong can fail. When they go into battle his lizards are desperate and half-starving; in this way when Sorgal's troops attack their mounts bite their enemies ever more ferociously. 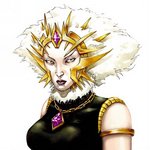 Yrbeth was a child gifted with powers of focus and concentration beyond her years. Training in the eldritch arts like many of her kin, Yrbeth's ability to focus her powers – famously displayed during an earthquake – permits her to accumulate more magical energies than is normally possible. The night before an important battle Yrbeth often goes sleepless, spending hours in meditation to prepare herself. 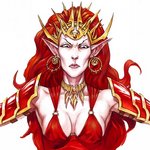 Wherever Yrwanna goes she is followed by a retinue of admirers who praise her beauty. But there is a keen intellect hidden behind the stunning appearance, and Yrwanna knows well how to using her looks to achieve her goals. Though Yrwanna has been known to sacrifice hundreds of her followers to achieve victory, it has not weakened the loyalty of her troops. 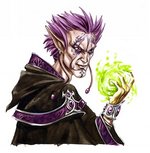 Lethos is considered a very useful ally due to his ability to win a battle before it starts. Though he has served many decades, his intimate knowledge of the more exotic poisons and diseases remains undimmed. Enemy troops approaching the field may feel the effects of Lethos's spells and concoctions even before the fighting begins; wise enemies have been known to start their attack by retreating.