Defeat Sandro and all his minions to win the campaign. However, if any of your four heroes are defeated in combat or you fail to defeat Sandro's forces in four months, the scenario is lost. Starting Bonus: 10 Halberdiers or 3000 Gold or 2 of each precious resource. 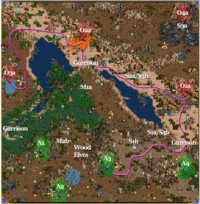 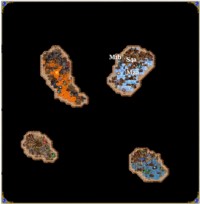 In many ways, this map is much easier than the previous one. The enemy is separated from you by three neutral Garrisons and Sandro is trapped behind a Quest Tower so he is unable to make an army of Liches. Take the 3000 gold as your starting bonus to get a start on building your towns.

During the first week, have all of the heroes flag mines and take the gold from the chests as there is no point in trying to increase levels as this is the last map and you'll need lots of gold to upgrade Wood Elves into Sharpshooters. I built a Castle and the Homestead in A1 and A2 as well as flagging the two Homesteads east of A1. In A3 and A4, I just built the City Halls and the Hall of Valhalla. I used primarily Sharpshooters and made sure to visit the two Homesteads east of A1 at the start of every week for even more Wood Elves. By the start of the second week, I had enough Sharpshooters that I was able to give them and the Angelic Alliance to Crag Hack to start defeating the enemy.

I traveled along the pink path from A3 and defeated the 22 Ghost Dragons at S1b. I put all of the Sharpshooters into one stack and didn't suffer any losses thank to the Resurrection spell. S1a will give you the Elixir of Life (25% bonus to HP and the regeneration ability) which will really help with the low hp of Sharpshooters. I then went through the Garrison which has 10 Power Liches, 20 Vampire Lords, 40 Wraiths, 80 Zombies, and 160 Walking Dead which are a piece of cake for Sharpshooters and Expert Slow. Be sure to hire some Nomads which will eliminate the penalty from the Sand terrain and take each castle in order from O1a -> O2a -> O3a being sure to defeat any enemy you find along the way. If Crag runs low on Sharpshooters, simply have Gelu upgrade Wood Elves and portal to the nearest town. However, I suffered very few losses and was able to defeat all three towns in about a week and a half.

After you've given Crag additional troops and Sharpshooters, go through S3a (once you have the Boots of Levitation) and attack Sandro. He only has 13 Strength, 14 Defense, 17 Power, and 7 Knowledge and a relatively insignificant army. Once Sandro is defeated, the map and the campaign is finished. Congratulations on a job well done.