Defeat all the Necromancers in the area and create the Angelic Alliance to win the scenario. However, if Gem, Gelu, Crag Hack or Yog are defeated in combat, the scenario is lost. The four heroes are limited to level 40 but will carry their experience, skill, and spells on to the next scenario. Starting Bonus: 10 Wood and 10 Ore or 30 Marksmen or 10 Crusaders 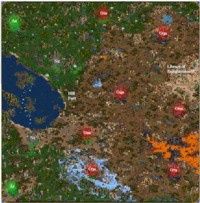 What I did was take the 30 Marksmen, give them and the Angelic Alliance to Crag, and go from one town to the next defeating all in turn. The other three heroes were used to attack wandering stacks of the undead with the Destroy Undead spell. I mainly built up the Rampart and Castle towns to get a lot of Wood Elves and Archers to change them to Sharpshooters.

I used Crag as my main hero because he had Wisdom, Earth Magic, and Air Magic and had the best statistics of all four heroes. That, combined with the Angelic Alliance, made him the perfect choice. I used primarily Sharpshooters so it's important to take over N1, N2, O1a, and O2a as they are able to produce Wood Elves and Archers. I concentrated on building City Halls and a Capitol and Castles in A1, O1a, N1, N2, and O2a. I only used other troops near the end of the map when I needed to be able to distract the enemy from targeting my Sharpshooters.

There are many mountains which impedes progress and so I was very fortunate that Crag Hack knew the Dimension Door spell. If your Crag doesn't know this spell, it's a good chance that someone else does so you can always give that hero the Sharpshooters to take over an enemy town, have Crag portal to that town, and then give the Sharpshooters back to continue defeating the enemy. It's also important to use the View Air spell at the beginning of every round to know where the enemy is. If they are close to one of your towns, send someone there to defeat them. It's very important to not lose any ground that you've taken as the enemy can get many more troops than you.

I generally went the N1 -> O2a -> O4a -> portal to O2a -> O5a -> O7a route with Crag and went the N2 -> O1a route with another hero (usually Gem). Then had Crag portal to O1a then go the O3a -> O6a route. If Crag needed any more Sharpshooters, I had Gem portal to each A2, N1, N2, O1a, and O2a collecting Wood Elves and Archers to hand them to Gelu who upgraded them who gave them to Gem who portaled to a town close to Crag where he could pick them up. It's a good idea to split the Sharpshooters into many stacks since there's an enemy who uses Implosion quite frequently and that will be devastating if you just have them in one stack.

You can find each of the four elemental orbs (increases effectiveness of each of the four magic schools by 50%) on the corresponding ground. You have to defeat an army of the corresponding elemental creature but I used Gem and had no problems thanks to her huge spell pool. I didn't really find any necessary except for the Earth Orb and the bonus it gives to Resurrection. You can also make the Cornucopia with artifacts that are just lying around but that's also an option if you're actually going to be building up the towns as there are not that many mines.

There are three Trees of Knowledge which I used to get Crag and Yog up to level 40 along with an Altar of Sacrifice which is of minimal use to Gem and Gelu. The only place really worth visiting for each hero is the Library of Enlightenment. Once you've defeated the last enemy and put together the Angelic Alliance, the map is won.