Crag Hack and Yog must find the Sword of Judgment, Armor of Wonder, and Lions Shield of Courage to win the scenario. However, if either hero is defeated in combat, the scenario is lost. They are limited to level 37 but will carry his experience, skills, and spells on to their next scenario. Starting Bonus: 4000 Gold or 10 Ogres or 40 Orcs. 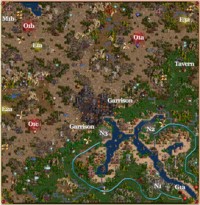 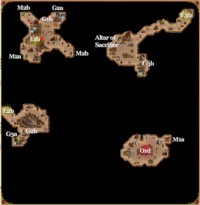 Pick the 40 Orcs as your bonus since that will increase your odds for getting joins, such as the Wolf Raiders in front of the Stronghold. Their ranged attack will also be a great help to defeating the many wandering stacks. There are no taverns in the towns and the only way to hire additional heroes is from a tavern in the northeast area on Yog's side. You also can't build a Capitol but that shouldn't be a problem since there's a lot of gold lying around and take the gold from the chests instead of experience. Be sure to give both Crag and Yog a Ballista since, with their high attack, they will do a lot of damage.

Your home area is seperated from the enemy area by two Anti-Magic neutral Garrisons with 40 Cyclops Kings, 60+ Ogre Magi, and 100+ Orc Chieftains and two wanderng stacks of 200 Scorpicores. I recommend going through the Garrisons as they are much easier, even with the Anti-Magic field. So build up both the Rampart and Stronghold towns for the first month and then break through the Garrisons. Crag took over O1c (tan) and then moved north to take over O1b (green) while Yog took over O1a (purple). Unfortunately, O1d (blue) is underground protected by a one-way mirror (M1a) so it's necessary to leave either Crag or Yog by M1b to protect O1b from being taken over.

I then explored the map and found an Altar of Sacrifice (found under E3a) which I used to increase both Crag's and Yog's level to 37. After that, I went to get the artifacts by going to E1a (northwest) and using the two-way mirror system to visit both G1b and G2a as well as by defeating the 4 Crystal Dragons to get the Sword of Judgement. Now go to E2a (west) through G2b to defeat the 8 Red Dragons to get the Lion's Shield of Courage and to visit G3a. Now go up to E3a (northeast) to get the Armor of Wonder by defeating 75 Minotaur Kings. Once all three artifacts are retrieved, the map is done.