Unholy Alliance → To Strive, To Seek

Gem and Gelu must find the Sandals of the Saint, Helm of Heavenly Enlightenment, and the Necklace of Celestial Bliss to win the scenario. However, if either hero is defeated in combat, the scenario is lost. They are limited to level 37 but will carry his experience, skills, and spells on to their next scenario. Starting Bonus: 6 Rogues or Spyglass or Boots of Speed. 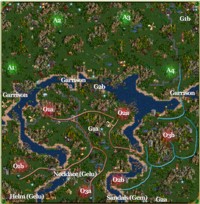 With so many Castle towns and so many Rampart towns, Gelu can have many dozens of Sharpshooters to quickly go on the offensive on this relatively easy map. So pick the Boots of Speed bonus and give it to Gelu along with all of the Wood Elves as possible and have him start taking over enemy towns. I had Gem stay in the home territory to flag mines, attack wandering stacks , and fending off any hero that makes it through the Garrisons with her huge spell pool.

Gem used Town Portal and went to every town to buy Wood Elves to give them to Gelu who turned them into Sharpshooters. Gelu and went along the east side by going to O3b (teal) and then to O2b (teal) as well as visiting the Archer Towers along the way to increase Gelu's Sharpshooter army. I then followed the red path to defeat the other towns and, with Resurrection, suffered very little losses. I used Gem to use View Air to keep track of the enemy heroes and used either Gem or Gelu to portal to the nearest town to defeat them. Both enemies were defeated in about three to four weeks.

I mainly built up to City Halls (one Capital) and Castles so that I'd have enough money to upgrade to Sharpshooters. I didn't really build many other buildings because Sharpshooters are strong enough and it's easy to get very many of them.

As the map indicates, Gem and Gelu are allowed to only get certain of the artifacts. Before you do so, try to level Gem and Gelu as much as possible but it's very difficult as there are few places to do so. However, visit all of the Places of Learning and build as many Mage Guilds as you (and be sure to visit them all) before collecting all three artifacts and winning the map.