Defeat the Rangers and Barbarians against Sandro and his forces of undead to win the scenario. However, if Sandro is defeated in combat, the scenario is lost. Sandro is limited to level 40 but will carry his experience, skills, and spells on to his next scenario. Starting Bonus: +3 Attack or +3 Defense. 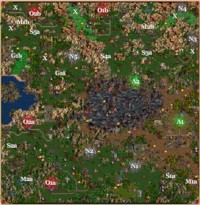 I'd pick the +3 Attack as your bonus and send Sandro out to attack the wandering stacks to build up a big supply of Liches. If you have the Town Portal spell, protecting your towns will be much easier, especially considering how many towns there which will make traveling much easier. There are many ambushes in the northern part of the map (30 Wood Elves and 20 Grand Elves) so be careful when you send out scouts.

There's not a best path to take after you're finished building up your army of Liches from the local wandering stacks. I headed north to defeat Gem and Gelu because Gelu had picked up the Dimension Door spell and had Logistics so it was hard to defend my towns with him bypassing mountains even with the Town Portal spell. O2b (green) ended up having Dimension Door so Gem started using it to which was really irritating. So I headed north to O1b (green) and then east to N4 through both a Zombie ambush and an ambush of 60 Wood Elves and 20 Grand Elves. I got the Bow of the Sharpshooter which removes the range, obstacle, and melee penalties from all the Hero's shooter stacks in addition to increasing the hero's archery skill by 30%.

After that, I used View Air to keep a track of the enemy heroes and made my way to the nearest town, portaling to other towns when they were threatened by any strong approaching enemy (especially Gem, Gelu, Yog, or Crag). I kept on building a Liche army and completing some of the quests along the way.

Since this is the last map you'll have controlling Sandro and since it seems that Sandro's stats get changed for the final confrontation, there's no need to visit Places of Learning or spend additional time increasing levels. There are enough wandering stacks around to keep Sandro well-stocked with Liches and Animate Undead will keep the losses to a minimum.