Unholy Alliance → Search for a Killer

Unholy Alliance - Search for a Killer

Defeat all the Necromancers in the area to win the scenario. However, if Gelu is defeated in combat, the scenario is lost. Gelu is limited to level 30 but will carry his experience, skills, and spells on to the next scenario. Starting Bonus: Pendant of Life or 2000 gold or 1 Green Dragon 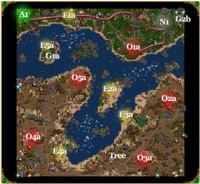 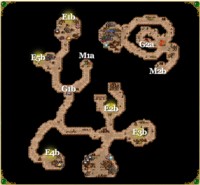 The most difficult part of this campaign is to make sure the secondary skills Gelu has are as good as possible. The first two slots are always going to be Leadership and Archery which leaves you with six slots to fill. I consider Earth Magic and Wisdom to be essential skills that you should get for the Town Portal and Slow spells. I got them along with First Aid, Armorer, Logistics, and Offense. I would have rather gotten Tactics or even another magic school instead of First Aid but I wasn't able to before I stopped trying.

Definitely pick the Green Dragon as your starting bonus as you need to take over another town in the first week and you'll be able to upgrade them to Gold Dragons very soon.

Head east immediately with Gelu in order to get the second town as fast as you can. The enemy has 5 towns to your one so you can understand the need to make inroads as fast as you can. Hire a second hero at the starting town to flag mines and don't stop to attack wandering stacks until you have reached the second town. Once you have you can take a somewhat leisurely exploration of the starting area. The second town is pretty well built up and you can build Dragon Cliffs in the first week which will help when you take over O1a (Soledare). Concentrate on making a City Hall in the first town since gold will be a big problem if you upgrade Wood Elves to Sharpshooters on a regular basis.

I'd attack O1a (Soledare) on the first day of the second week but wouldn't use any Sharpshooters because the Castle turrets attack them constantly and they are too valuable to lose. If you buy everything else in your second town, you will be okay and shouldn't lose any of your Green Dragons. Fortunately, there is no annoying magic-casting hero in O1a so that will make things a lot easier.

There are two ways to get across the river, through the underground or on a boat. While there are a good deal of Places of Learning underground, it's more important to make a dent in the enemy so I'd buy a boat at the shipyard and head directly south. Even without Navigation, you will make landfall in three or four days. Before you go, be sure to build a level 4 mage guild in the second town in order to get Town Portal. This will be very important to get reinforcements quickly which will be vital as you will see. Take over O2a and O3a and watch out for any enemy heroes in the area since there's a super enemy going by the name of Aislinn with a lot of troops wandering around and you certainly don't want to face with just Sharpshooters and Green Dragons. So while Gelu is wandering around in the western parts of the enemy's area flagging mines and taking over towns, make sure you're upgrading the second town to at least Gold Dragons and Dendroid Soldiers. What I did was town portal to my first town (A1) and buy as many troops as I could, then town portal to my second town (N1) and upgrade the troops I got in A1 as well as buying as troops from N1 giving a priority to Gold Dragons and Dendroid Soldiers and Wood Elves (upgrade them to Sharpshooters). Then I return to the nearest town by Aislinn and hope he attacks when I'm safe in a Castle. After he's defeated, you can breathe a sigh of relief since the rest of map will be very much easier.

At this point, I headed east with Gelu and took over O4a and took Gelu underground so he could visit the Places of Learning and attack wandering stacks for experience and hopefully levels. While there were quite a few enemy heroes wandering around, I just hired the troops in the Necromancer towns which were enough to dissuade or even defeat the enemy heroes outright. I also built up the mage guilds in all of the towns and was fortunate enough to get Meteor Shower and Implosion but not Slow which strikes me as somewhat purposeful. I also visited the Tree of Knowledge east of O3a before taking over the final town at O5a and defeating all of the enemy heroes to win the map.