You must kill Lord Fayette to win the scenario. However, if Gem is defeated in combat, the scenario is lost. Gem is limited to level 30 but will carry her experience, skills, and spells on to her next scenario. Starting Bonus: 30 Grand Elves or Homestead or Destroy Undead Scroll. 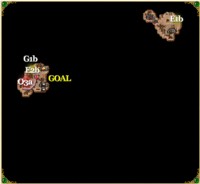 The most difficult part of this campaign is to make sure the secondary skills Gem has are as good as possible. This seems to be very easy since it seems that Archery, Wisdom, Air Magic, Water Magic, Earth Magic, Tactics, and First Air are locked in with only one slot to be concerned with. I chose Intelligence although other good choices would be Offense or Armorer to increase the effectiveness of the troops or Sorcery to make the spells even have more power.

I recommend picking the 30 Grand Elves as your bonus since that will enable you to clear out local stacks faster.

There is only one path between your area and the Necromancer area and it's guarded by a stack of Black Dragons so you have several weeks to explore and flag mines and build up your towns before having to face the enemy. I focused on building a high quantity of Centaur Captains, Battle Dwarves, Grand Elves, and Dendroid Soldiers in both of the starting Rampart towns and used the third town as a gold producer. Just keep a careful watch on the Black Dragon stack and have a good force in the area when the enemy breaks through in about week 3 or 4. Once this happens, get all of the troops you can and make the push to the enemy area.

Follow the blue path to O1a and defeat any heroes you come across on the way there. Gem should have Expert View Air by now so this is a great way to keep tabs on the enemy. In my game, O1a was the most heavily built-up town so once you take it over, the enemy should be severely weakened. If there are no enemy heroes in the area and if you have enough troops then go through the Garrison which should have 8 Black Knights, 10 Liches, 5 Bone Dragons and 30 Vampires. If not, you can place Gem in front of the Garrison while you give her more troops since the enemy can only go through the Garrison to reach you.

Once you're ready, go further on the blue path to take over O2a and then north to take over N2. At this point, you're protected from Lord Fayette by G2b underground that can only be opened by visiting G1a which is in the southeastern corner guarded by approximately 18 Gold Dragons. I spent the next several weeks flagging mines and building up Mage Guilds in all of the towns so that I'd have a much easier time in the future. I was also battling wandering stacks in a futile attempt to gain levels or find Places of Learning. Unfortunately, there are very few of either so I remained at level 25 and not as strong as I had hoped at the end of the map.

Once you've visited the Mage Guilds and have a good deal of troops, visit G1a (southeastern corner) and then back west to E2a to go underground and face Lord Fayette. His stats are 11 10 8 8 (Armorer and Resistance) with at least 75 Black Knights (I had 98) who will do a great deal of damage unless you have a strong spell such as Lightning or Implosion. Once you cast Implosion, Lord Fayette will likely cast Anti-Magic on the Black Knights so you have to cast Dispel before you can cast spells on them again. Resurrection will help you out a lot and once you have defeated Lord Fayette you will have won the map.