Yog must defeat the Necromancers creating havoc in this part of Erathia to win the scenario. However, if Yog is defeated in combat, the scenario is lost. Yog is limited to level 30 but will carry his experience and skills on to his next scenario. Starting Bonus: 40 Goblins or 2 Cyclops or 4 Rocs. 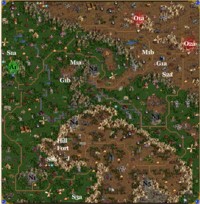 The most difficult part of this campaign is to make sure the secondary skills Yog has are as good as possible. You can reset them by restarting the map until you are pleased with the result. This can be somewhat tedious and I recommend saving if you get anything that's even half-way good because you never know if you will be that lucky again and restarting the map is boring. Yog has four skills that are locked in (Pathfinding, Ballistics, Tactics, and Offense) and getting Wisdom plus a spell school is extremely difficult. I was fortunate and got Artillery, Air Magic, Logistics, and Wisdom.

I recommend picking the 4 Rocs as your bonus since that will fit in with your army.

I would spend the first 3 weeks exploring your local area in collecting troops and flagging mines. It's not really necessary to get upgraded troops since you'll eventually be using mostly Necromancer troops for this map. I relied on Goblins, Wolf Riders, Orcs, and Rocs until I replaced them with Necromancer troops.

In the 3rd or 4th week, you'll start seeing the enemy poke around in the area northeast of A1 so that's when I start making inroads into the enemy area. N1 is protected by a small force but is not built up at all (it doesn't even have a Fort) so I'd only use it for a City Hall. O1a and O2a (tan) are the primary towns and will probably be your toughest battles if you can't catch the enemy heroes out in the open. Fortunately, once you take them over and keep them you will have weakened the enemy significantly as well as getting a good source of troops that will help you in the second leg if you suffered heavy casualties from your original Stronghold troops.

The tan enemy will probably have taken over both N2 and N3 by now but they shouldn't be built up very much and shouldn't be a danger. Your goal is to keep the enemy trapped in one town while you have Yog visit power-ups and level-up. If the last town is N2 then it's easy to have one hero sit outside N2 and use Stronghold troops and use another hero to ferry them from A1.

As long as you keep the enemy trapped, you can take as long as you want to explore and gain levels. There are 3 Trees of Knowledge in the central southern area that are very helpful once you get to level 27. There's also an Altar of Sacrifice in the northeast corner that will help get to that level as well as plenty of wandering stacks. There are three Seer quests but none of them are really useful. S1a will give you the Buckler of the Gnoll King for the Targ of the Rampaging Ogre which only gives one defense extra. S2a will trade 20 Vampire Lords for 100 skeletons and the enemy often completes this one before you can even get to the area. S3a will give you Angel Wings for 15 Cyclops Kings which lets you fly all of the time without having to know the spell.

Once you are done traveling and visiting power-ups, stock up with Necromancer troops and visit the last tan town and defeat it to win this map.