Song for the Father → Safe Passage

To win, the Necromancer, Nimbus, must reach the town of Highcastle with the Statesman's Medal. At the end of this scenario, Nimbus and your 7 strongest Heroes will travel with you to the next scenario of this campaign. Starting Bonus: Boots of Speed or Logistics or 2500 Gold. 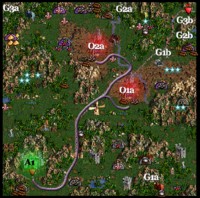 This is a small map with no underground so it is vital for you to be aggressive and get rid of the Purple enemy as soon as possible. First build the Archer's Tower and hire all of the available troops. Then hire one or two additional heroes and give a magic-user of your choosing all of the troops. I suggest using a magic-user since they will do quite a bit of damage with Magic Arrow, especially against the Level 1 and 2 enemy troops you'll be facing.

Take the hero along the purple path, stop at the Guardhouse for some more Pikeman, and then continue until you reach O1a. You should be facing just a few Skeletons and Zombies which should be a piece of cake. I suggest taking one of the heroes you hired earlier and put them in O1a and build a Citadel just in case an enemy hero slips past you. Then go northwest to O2a and take that town as well. You might see the lone enemy hero close by and you are probably in a good enough situation to attack them. Since they don't have any towns left they won't run away and so, upon defeating them, you will have defeated the only enemy.

Usually that would be the end of the map but your goal is to bring Nimbus to your home town and he's prevented from traveling by three Guard Towers. In addition, you can take seven of your strongest heroes will transfer to the next map so it is a good idea to take the time and level up seven heroes by taking them to the many Learning Stones and other places of learning that's available. I'd suggest taking two might heroes and getting them up to about level 9 or 10 since the use of high-powered magic is somewhat limited in the next map. I'd get at least one magic user to be about level 8 and then level the rest of your heroes as far as possible. Build Mage Towers in every town and have every hero with Wisdom visit them because the spells will transfer to the next map.

One you're done leveling up your heroes, visit all three Guard Tents at G1a, G2a, and G3a so that Nimbus can move past G1b, G2b and G3b to proceed to Highcastle. You don't have to bother leveling Nimbus since he is given a pre-set level and skills in the next map. Simply have him visit A1 and this map will be over.