CH →
Walkthroughs →
Specter of Power → With Blinders On
﻿

Specter of Power → With Blinders On

Sandro must defeat all of the lords who seek his position to win the campaign. However, if Sandro loses even just one battle, others will sense weakness in him and destroy all he has worked for. Starting Bonus: 5 of each precious resource. 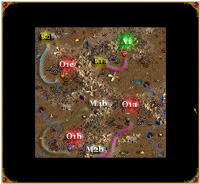 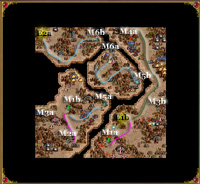 You have no selection in what starting bonus you have and none of your heroes traveled with you but they are not important since with Sandro's magical ability you can use Summon Water Elemental and Animate Undead to defeat armies much bigger than your own.

O1c (orange) should be trapped in its area so your goal is to defeat both O1a (green) and O1b (blue) as soon as possible as well as visiting all of the guard tents. I spent about two weeks by A1 building up my town and clearing out the area. I took all of the troops and traveled along the pink path, defeating enemies along the way until I went to the O1a area and defeated the green enemy. I retraced my path (or used Town Portal if you have it) to get back to E1b and then headed north on the green path to get to the O1b area and took out the blue enemy. These battles should be very easy if you make good use of Summon Water Elemental and Animate Undead. At this point I could relax and started to upgrade the towns, visit mines, and the guard tents.

After exploring everywhere I waited for a few more weeks and collected as many troops as possible and traveled along the blue path through the guard garrisons through E2a into the O1c (orange) area and attacked the final hero. This battle was very very easy (especially compared to Melodia) and so just use Summon Water Elemental, Animate Undead, and your favorite attack spells and you will have won both this map and the campaign.